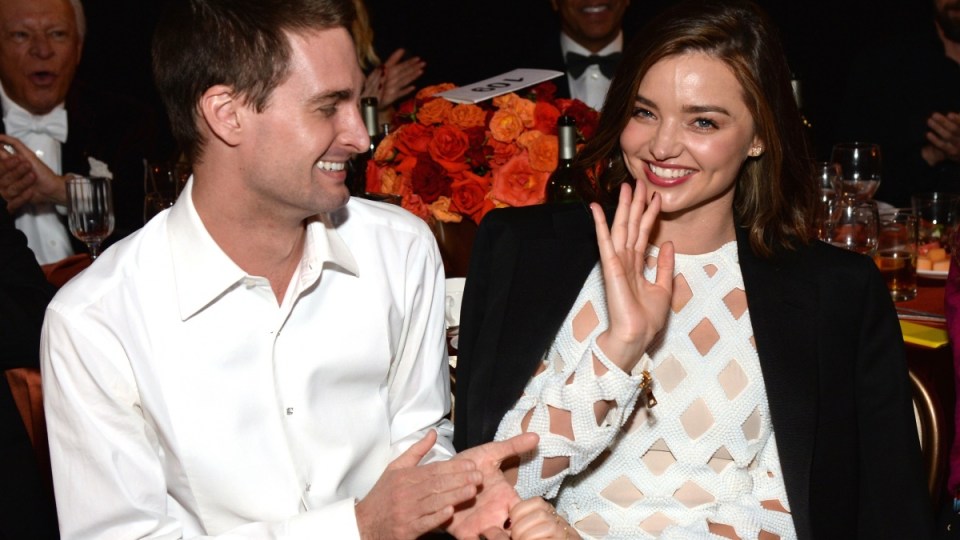 Australian supermodel Miranda Kerr has used her recent engagement to Snapchat founder Evan Spiegel to spruik one of the app’s new features.

Kerr, 33, broke the news of her upcoming nuptials by sharing a black-and-white photo of her engagement ring to her Instagram account, which boasts 9.5 million followers.

Partially obscuring the photo were cartoon figures of herself and Spiegel down on one knee with “Marry Me!” in large text. Kerr captioned the shot: “I said yes!!!”

While many merely took the cartoons as a fun embellishment, their inclusion in the much-shared post was also strategic.

The cartoons are known as Bitmojis and they’re created using an application named Bitstrips, launched in 2007 by its Toronto-based CEO Jacob Blackstock.

Bitstrips allows its users to design their own personalised emojis (small icons used to convey emotion over online or text messaging) featuring an avatar of themselves.

Bitmojis, which can be uncannily accurate, gained popularity thanks to shout-outs from celebrities like John Mayer and Lena Dunham.

When it takes everything inside you to keep from telling someone their Bitmoji looks nothing like them.

"Making a Bitmoji is grueling work, and it also means taking a good hard look in the mirror" –@shinyunicorn , who is totally right

So how are they relevant to Kerr’s engagement?

Snapchat, the app Spiegel launched with college friends to great success in 2012, acquired Bitstrips this week.

This means Snapchat users – there are over 150 million of them – can now add their Bitmoji avatar to their Snapchat posts, a feature Kerr is clearly already well acquainted with.

In fact, Kerr posted the engagement announcement to Snapchat before she posted it to Instagram, likely a bid to give her fiance’s app the scoop over the rest of the social media world.

Happy Birthday to my love!!! 🎂🎈🎉 I feel so incredibly blessed to have you as my partner ❤️🙏🏻❤️

The supermodel is well aware of her social media clout and has been using it to promote her 26-year-old fiance’s popular app since they first started dating.

In December last year, two months before the pair made their official public debut, Kerr joined the app and started posting clips from Snapchat to her other social media accounts.

Follow me on Snapchat to see my official story! Add username mirandakerr 😘

While Spiegel, who has a net worth of $US2.1 billion, doesn’t exactly need the extra promotion, Kerr’s regular endorsements wouldn’t hurt a business constantly working to remain relevant in a competitive environment.

I’m telling you, I’ve got the best of both worlds!
Miranda Kerr

Kerr and Spiegel have been dating for little over a year, after meeting at a Los Angeles dinner and striking up a long-running friendship.

Kerr said she was cautious about introducing Spiegel to her three-year-old son Flynn with ex-husband Orlando Bloom.

How Miranda turned her engagement into a PR plug