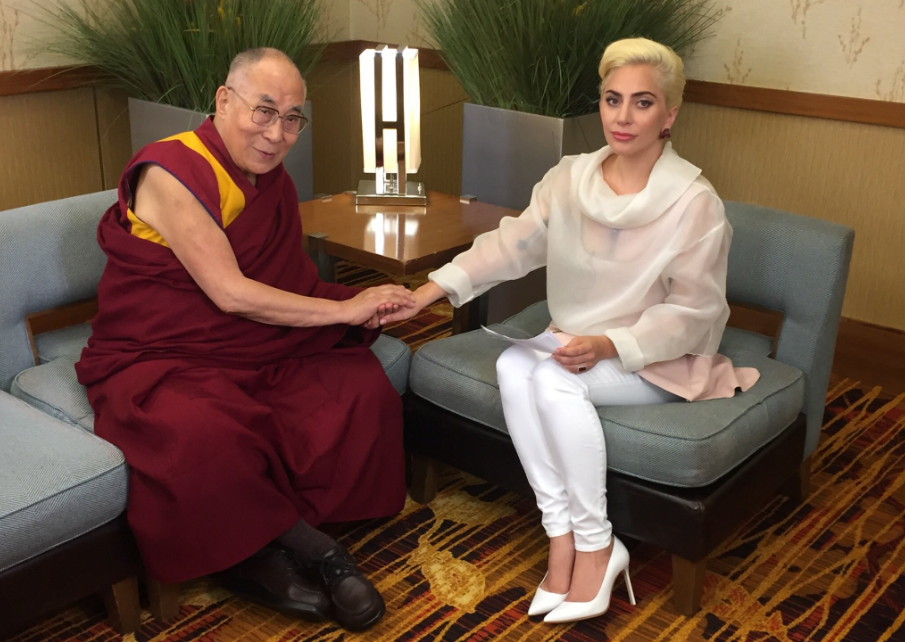 Unlike Beijing's rulers, Lady Gaga was eager to meet and speak with the Dalai Lama. Photo: Getty

Lady Gaga has reportedly been banned from China for meeting with the Dalai Lama.

The singer is one of the most popular international entertainers in mainland China, but reports have questioned whether she’ll be allowed back to perform.

During their meeting in the US city of Indianapolis, Indiana, Gaga and His Holiness touched on mental health, yoga, self esteem and how to make the world a more compassionate place.

The singer – known for boundary-pushing outfits such as the infamous raw meat dress – wore a conservative pair of white pants and a pink turtleneck sweater.

He said the Dalai Lama was a “secessionist chief who fools simple believers under the guise of religion” and blamed him for riots in 2014 that killed 18 people and left hundreds wounded.

The site referenced a number of livid Chinese and Taiwanese social media users, one of whom apparently described the singer as “tantamount to ISIS”.

Other accounts that appeared to be Chinese questioned why the singer would want to meet the Dalai Lama.

“If you need Chinese fans, please leave it,” wrote one user on social media.

“You just see what he wants you to see. Don’t buy it! Don’t fall into it!”

However, most of the comments accompanying the image of Gaga with the Tibetan Buddhist leader were positive and thanked the singer for addressing the “important topics”.

The Dalai Lama and China

The Dalai Lama, who has embraced social media for spreading his message of happiness and harmony, was in the US for the Conference of Mayors.

Since 1959, the 14th Dalai Lama has led an exiled Tibetan government, not officially recognised by the United Nations.

Relations between the Chinese and Tibetan governments disintegrated in the 1940s, culminating in the leader fleeing in 1959.

Since then, he has claimed his title as the ‘Spiritual leader of the Tibetan people’ while touring the world.

Celebrities such as actors Richard Gere and Stephen Seagal have been very vocal in their support of the leader’s quest for formal independence from China.

As a result, Richard Gere has previously admitted that he is “not welcomed” by the Chinese government.

According to the reports, Gere and Gaga may now have that in common.

Thank you for this special day. Science tells us kindness improves health, let’s take care of the body of our nation pic.twitter.com/jsvlTy5pTH

There are always problems to face, but it makes a difference if our minds are calm.