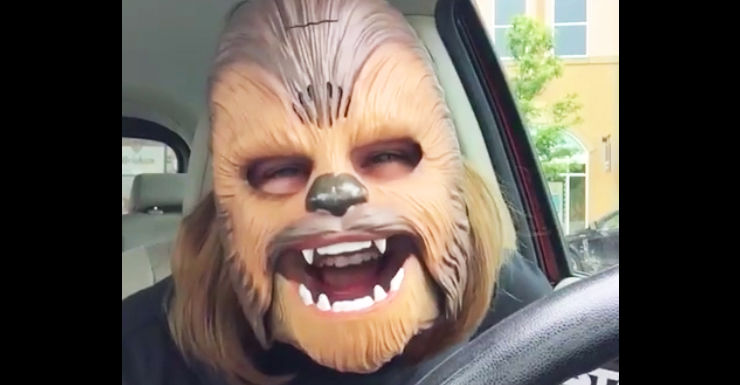 She may only be famous for giggling in a Star Wars character mask, but ‘Chewbacca Mum’ has reportedly gained more than just millions of views.

Candace Payne, 37, a Texas mother and housewife, captivated the internet by laughing infectiously while trying on a Chewbacca mask in May.

With over 150 million views, the video became Facebook Live’s most watched ever, resulting in a flood of invites for Payne to appear on talk shows, at Disney World and even Facebook HQ.

But in case you thought it all ended there, it seems Payne has managed to increase her fortunes considerably through her new viral fame.

According to Time Magazine, the jovial mother of four has racked up about $A560,000 in gifts – most impressively with an offer of free college tuition for each of her four kids.

And while on The Late Late Show, host James Corden told Payne she was being sent to the Fan Expo Dallas convention to meet the “real Chewbacca” (actor Peter Mayhew) and reportedly also to flog her autograph for $25 a pop.

While at $40 the Chewbacca mask started out as perhaps an indulgent purchase, it turned out to be a very wise investment by Payne.

The Texan and her family have been flown all over the country to appear on talk shows including Good Morning America and The Late Late Show, with all-expense paid trips estimated at $US10,000.

Kohl’s, the store she bought the mask from, was clearly grateful for the publicity they received from the video, surprising Payne with $US4000 in gift cards to the store.

And they should be thankful – the mask is now sold-out at most shops and is being flogged on eBay for up to $US700 each.

Next, the whole family was treated to an all-expenses paid trip to Disney World, estimated at about $US10,000.

But the most impressive gift, as well as the least-related to her video, has been a pledge by South Eastern University in Florida to pay for all of her children’s college degrees.

With the price of tertiary education in the US trumping even Australia’s most expensive universities, this gift from the “Christ-centered institution of higher learning” could be the one that really changes Payne’s life.

With one semester currently setting Americans back $US16,000, Time estimated a full degree for each of Payne’s four kids would total a stunning $US535,000 once future increases to tuition were factored in.

So why the incredible gift from a seemingly unrelated institution?

“Candace has inspired us and others with her joy, and we want her and her family to experience some of that same joy through this gift,” college president Dr Kent Ingle said.