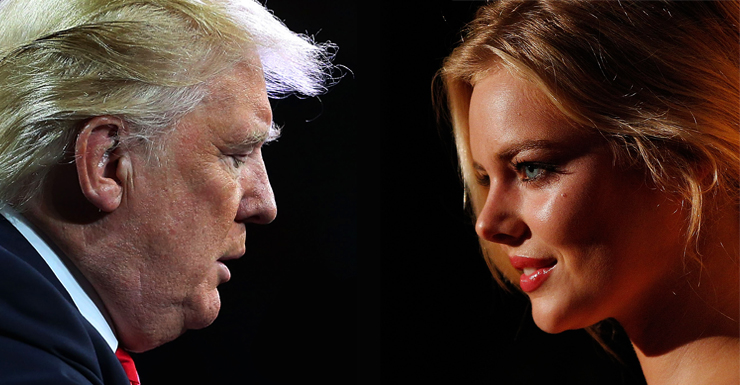 Former Home and Away star Samara Weaving has unwittingly been used to promote a hoax supporting US presidential hopeful Donald Trump.

The model and actress said on Wednesday it was “so stupid” that a photo of her in special effects makeup looking bloodied and bruised was being shared widely by Trump supporters as proof that their rivals are violent.

“I really hate this,” she wrote on Twitter, after being alerted to the hoax.

The image was shared by Conservative Nation, a pro-Trump Twitter account, on June 6 (Australian time) with a caption that implied Weaving was assaulted by “liberals” – a pejorative term used by US conservatives to describe left-wingers.

Weaving demanded on Wednesday that the account remove the image. It did not comply.

“I’m not American. I can’t vote in your country. This is so stupid,” she wrote. “@Cons_Nation get rid of this please!”

The realistic-looking makeup was applied to Weaving for her part in the horror comedy TV series Ash vs Evil Dead in 2015. She appeared to be bleeding from the scalp, with bruising to her left eye and claw marks to her chest.

The hoax photo matches an image published by Daily Mail UK in January 2016, which was originally shared by the show’s makeup artist Hannah Wilson on Instagram. The photo was also posted by Weaving on Instagram in February 2016.

Ash vs Evil Dead star Bruce Campbell notified Weaving of the hoax, describing it as “sad”.

“Check your facts, folks,” Campbell wrote on Wednesday. “This is an actress named Samara Weaving from #AshVsEvilDead. This is a make-up test. Sad.”

Weaving is best known for playing Heather in the first season of Ash vs Evil Dead, Kirsten Mulroney in Out of the Blue, and Indi Walker in Home and Away. She is the niece of famous Australian actor Hugo Weaving.

The hoax circulated by Conservative Nation may have been a reference to violent clashes between Trump supporters and anti-Trump protestors outside a Donald Trump rally in San Jose, California on June 3.

It was widely reported that anti-Trump demonstrators instigated the violence.

Mr Trump is the presumptive Republican presidential candidate. He is likely to face off in November against Democrat Hillary Clinton, who declared victory in her party’s primary race on Wednesday.