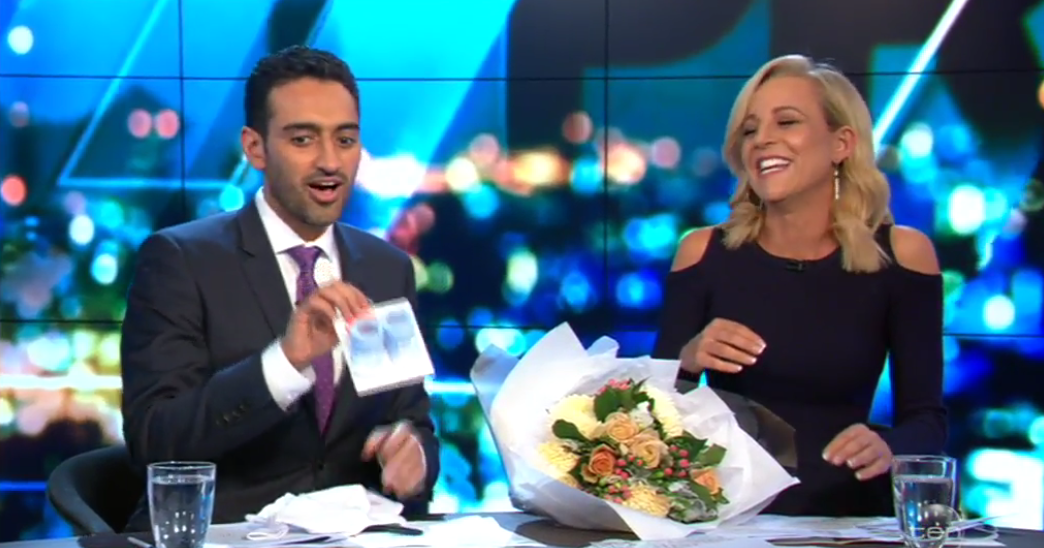 In case you were confused after watching Tuesday night’s episode of The Project – and many were – Carrie Bickmore is not pregnant.

During the program, Bickmore’s fellow panelist Peter Helliar presented the 2015 Gold Logie winner with a bouquet of flowers to ‘congratulate’ her on her apparent pregnancy, reported this week in a celebrity magazine.

• Rivers on flood watch after weekend carnage
• Secret City: Australia’s own political drama
• What it’s like to write a novel that becomes a hit

But after joking with fellow panel member Waleed Aly at the expense of Bickmore, the mother of two felt the need to clarify the issue for several family members.

“If you’re watching at home, mum – no, OK. I just started sleeping! God, that would be a nightmare … I just had a big focaccia for lunch.”

ICYMI congratulations are NOT in order for @BickmoreCarrie 🚫💐 #TheProjectTV pic.twitter.com/F8KUZf4NOe

Later in the show Bickmore told her grandmother: “Nan! It’s not happening.”

Despite the panelists and Bickmore eventually making clear that there was no pregnancy, many on social media did not get the hint.

Louise tweeted: “@theprojecttv @BickmoreCarrie i am confused about Carrie is she pregnant or not”.

Another user, Ellie, wrote: “Trying to explain to mum that @BickmoreCarrie isn’t actually pregnant, can you help @fifi_box ?? #TheProjectTV”.

So where did the rumour originate?

In the June edition of New Idea magazine, a front page headline and article claimed Bickmore was pregnant with her third child.

The article quoted “several insiders” as confirming Bickmore’s pregnancy and said her behaviour at the Logies backed up such claims.

“Despite the bubbly blonde cutting serious shapes on the Logies dance floor, she avoided the free alcohol on offer, instead choosing water,” the article wrote.

It also presented other evidence about her behaviour that suggested she was pregnant.

“A recent switch to uncharacteristically baggy clothing has everyone talking … the host also posted a picture [to Instagram] of herself [last week] … showing fans only a picture of her dress from behind.”

Helliar went on to have another dig at New Idea for its inaccurate story.

“It’s in a magazine, magazines don’t lie,” he said. “They work very hard … You have been wearing uncharacteristically loose clothes on The Project.”

Pointing and playing with her clothes with an exasperated look on her face, Bickmore responded: “It’s winter.”