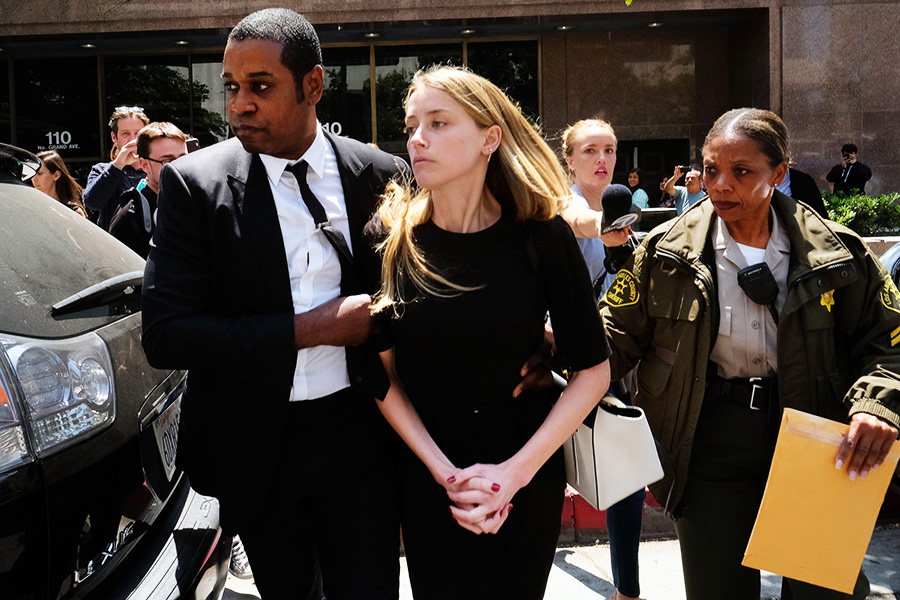 Shocking revelations have emerged in the divorce battle between Hollywood star Johnny Depp and his actress wife, Amber Heard.

On Saturday a judge granted Heard, 30, a temporary restraining order against her husband, 52, after she filed a petition in the Los Angeles Superior Court alleging ongoing verbal and physical abuse in their marriage.

While Depp’s attorney has denied Heard’s petition “in its entirety”, Heard provided the court with a detailed account of the most recent accusation of violence as well as photos of the alleged damage to her face and home.

The majority of Heard’s claims centre on the night of May 21 – her 30th birthday party – when Heard alleges an “inebriated and high” Depp arrived at their Los Angeles residence and became violent.

Heard, who filed for divorce on May 22 citing “irreconcilable differences”, claimed she attempted to comfort Depp over the loss of his mother, who passed away on May 20.

“Suddenly, he began obsessing about something that was untrue and his demeanour changed dramatically. He became extremely angry,” the filing stated.

Heard alleged Depp screamed profanities, pulled her hair, struck her face and threw a mobile phone at her head.

According to Heard, Depp’s alleged abuse was not just limited to one night, but was an ongoing problem in their 15-month marriage.

In her filing, Heard says during the “entirety of our relationship, Johnny has been verbally and physically abusive to me.

“I endured excessive emotional, verbal and physical abuse from Johnny, which has included angry, hostile, humiliating and threatening assaults to me whenever I questioned his authority or disagreed with him.

“Johnny has a long-held and widely-acknowledged public and private history of drug and alcohol abuse. He has a short fuse. He is often paranoid and his temper is exceptionally scary for me as it has proven many times to be physically dangerous and/or life-threatening to me.”

According to her lawyer, Heard initially wanted to keep the matter out of the public eye.

“I stated that, although Amber had been attacked and remained in fear for her safety, given the notoriety of both parties and the high likelihood of press harassment, Amber would prefer to settle the matter amicably out of Court,” Heard’s attorney Samantha F. Spector said in her declaration.

In a response to Heard’s claims, Depp’s lawyer Laura A. Wasser dismissed the filing as an attempt “to secure a premature financial resolution by alleging abuse” which “appears to be in response to the negative media attention she received earlier this week”.

“These issues can and will be resolved,” Wasser’s document said, noting that Depp was on another continent touring with his band and would not return home before June 7. The order is set to be reviewed on June 17. Until then, Depp is prohibited from contacting Heard or coming within 91 metres of her.

Depp, who was at a charity event in Portugal when news of the filing broke, did not comment on the allegations.

The Los Angeles Police Department said it investigated Heard’s claim on May 21 but found no evidence of crime.

“The person reporting the crime did not insist on a report and no report was warranted. There was no evidence of any crime. A crime did not occur so the officers left the scene and left a business card.”

An LAPD spokesman said there was no active investigation into Depp because no crime involving the actor had been reported.

“We are more than willing to investigate all crimes that are reported to us,” Captain Andy Neiman said. “At this point, we have no crime.”

Judge Carl Moor denied Heard’s request for spousal support from Depp on the basis that the court did not have enough financial information to make an order.

According to an income and expense document Heard filed, her monthly expenses are around US$43,700, including $10,000 in rent.

“Concurrent with this filing I am providing an Income and Expense Declaration. I am requesting $50,000 a month as and for pendente lite spousal support based on our marital lifestyle,” Heard’s filing stated.

Wasser argued that: “as a successful actress with significant income of her own, there is no question that Amber can support herself until the parties have had a reasonable amount of time to assess their finances with the assistance of counsel and then negotiate a mutually agreeable resolution or seek regularly-noticed court orders”.

Heard’s request to protect her dog, Pistol, from Depp was also denied due to “insufficient showing of need to protect pet dog”.