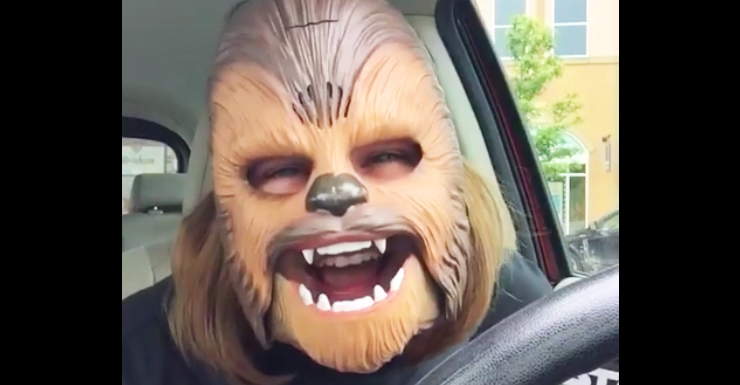 Texas mother Candace Payne has struck a chord with Facebook users, breaking one of the website’s video records by laughing uncontrollably in a Chewbacca mask.

Ms Payne filmed herself in real time on Friday (Australian time) trying on the Star Wars-themed mask in the parking lot of a local department store in the US city of Dallas.

“That’s just crazy,” Mrs Payne told the BBC. “I’m just laughing – in all honesty, that is ridiculous. I’ve looked at the number of views and it just seems like someone is just playing with a calculator.”

It was the woman’s infectious, hysterical laughter that seemed to propel its popularity.

Once she fitted the Chewbacca mask, Mrs Payne simply could not stop — and every time she opened her mouth, the mask made Chewbacca’s famous roaring sound, triggering even more laughter.

Facebook Live is a relatively new feature that allows users to broadcast live to the social media website.

The previous Facebook Live record holder was Buzzfeed‘s live exploding of a watermelon.