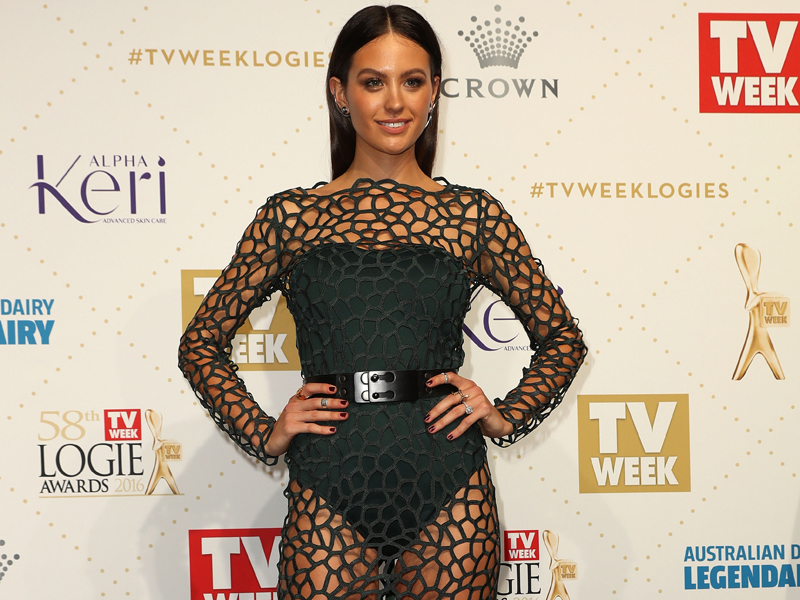 Jesinta Campbell has hit back at critics of the revealing dress she wore to Monday night’s Gold Logies ceremony by comparing the criticisms to the harsh treatment of women in Iran.

The model, 24, told her fans on Tuesday night that women should be allowed to wear “whatever the hell” they like without fear – a right women in many Muslim countries lack.

“Being able to chose (sic)what you want to wear as a woman is a freedom that not all women have access to,” she wrote on Instagram.

Campbell revealed in the post that the green strapless bodysuit worn beneath a green fishnet dress was designed by Tala Raassi, a famous fashion designer born in Tehran who was jailed and flogged as a teenager for wearing immodest clothing in the presence of men.

“At 16 years old, Tala was invited to a house party with her friends. What should have been a fun and very normal experience for any teenager was something that changed Tala’s life forever,” Campbell wrote.

“Not long into the evening, government officials stormed into the house and arrested her alongside other guests. In Tahran (sic), being uncovered as a women around the opposite sex was unacceptable so she was thrown into jail for five nights then sentenced to 40 lashes, across her back, because she was wearing a skirt and a t-shirt.

“It was through this experience that Tala realised that fashion is freedom.

“Being able to chose (sic) what you want to wear as a woman is a freedom that not all women have access to.

“From the day I met Tala my lack of thought and care for fashion grew into a strong passion.

“I am proud to work in the fashion industry and promote self expression and freedom of choice.

“Every day that I get up I am grateful that I can choose whatever the hell I want to wear without the fear of punishment or violence or imprisonment.

“Tala, Thank you for opening my eyes to how important fashion and the freedom of choice is for all women!”

Campbell’s Logies attire was criticised by some media commentators – and even surprised her partner, AFL footballer Buddy Franklin.

The model told reporters at the Logies ceremony that the Sydney Swans star thought the outfit was “a bit much” and that he would probably have preferred her to be “fully covered head to toe”.

Jesinta: ‘I can wear whatever the hell I want’