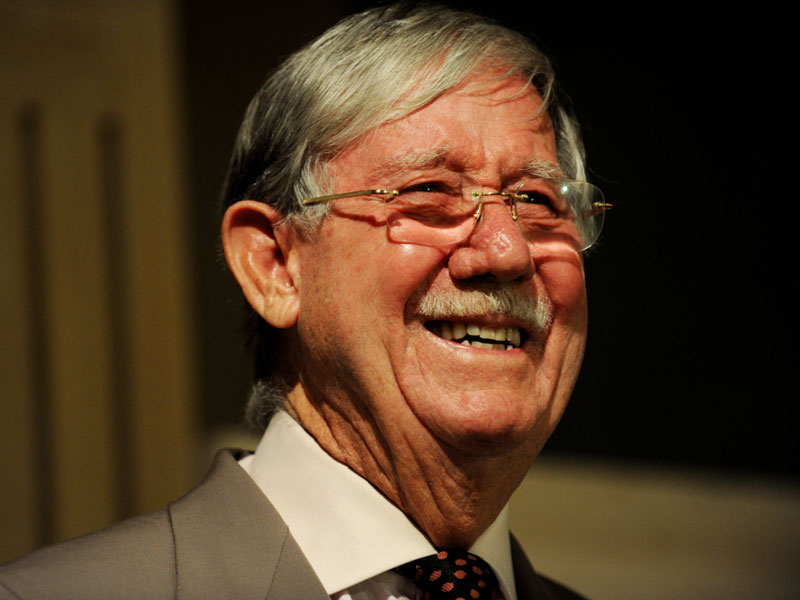 Pioneering Australian TV producer Reg Grundy has been remembered as a gentleman, a legend and a national treasure by those who knew him.

Mr Grundy died at his Bermuda home on Friday (local time), aged 92 with his wife Joy Chambers by his side.

Hundreds of Australian actors got their start with shows produced by the Logies Hall of Fame inductee, including Neighbours, Prisoner and Sons and Daughters.

TV personality Bert Newton described Mr Grundy, who he first met in 1959, as a “true giant” of the entertainment industry.

“The number of people in the industry would be in the hundreds and thousands who would be considering today the loss of one of the truly greats of television,” he said.

“Away from the cameras and away from production Reg was a very affable person, wonderful sense of humour.

“Whilst there were already a couple of panel shows and quiz shows on the air, he just had this indefinable ability to know which ones were going to be successful and how to make them a success.

“He went from an Australian producer, probably small-time would be the best description, to being a major producer around the world, especially in the key areas of the Unites States and England but also of course remaining one of the top producers in Australia.”

Mr Grundy was best known for his ability to resonate with television viewers in a time when the medium was only just emerging in Australia.

This was particularly true for US game shows – he successfully introduced Blankety Blanks, Wheel Of Fortune, Sale Of The Century and Perfect Match into the Australian TV landscape.

His work earned him an International Emmy Founders Award in 1996 and a Companion of the Order of Australia in 2008.

Ian Hogg, CEO of FremantleMedia which was previously Grundy Productions, described the media mogul as a “national treasure”.

“His legacy to Australian entertainment is insurmountable,” he said.

“His visionary ability to know how to connect Australian families through some of this country’s most loved programming has stood the test of time.”

Mr Grundy was the son of Hillier’s chocolate shop manager Roy Grundy and Lillian, an assistant in the NSW shop.

As a young boy, he was involved in the arts, but took up an executive traineeship at David Jones in 1938.

Then-chairman, Sir David Lloyd Jones, offered to pay his tuition fees at a prestigious art school, but in December 1941 Mr Grundy was conscripted to the army.

He struggled to adjust but, after a brief stint AWOL, was elevated to corporal in 1943. He moved into radio after he was discharged in 1946.

Eleven years later, he made his first TV appearance as host on Wheel of Fortune, after he came up with the idea for the game show and sold it to Channel Nine.

But hosting was not his calling and he moved off screen to producing, successfully exporting some of Australia’s most popular dramas to the United States and United Kingdom – despite constant rejection.

Mr Grundy died at the home he shared with his wife of more than four decades, also an actress and author.

Ms Chambers appeared in several of his programs and co-founded RG Capital in 1995.

The pair met when she auditioned to become the ‘golden girl’ on game show I’ve Got A Secret, later renamed Sale of the Century, long-time friend and 2GB host Alan Jones said on Monday morning.