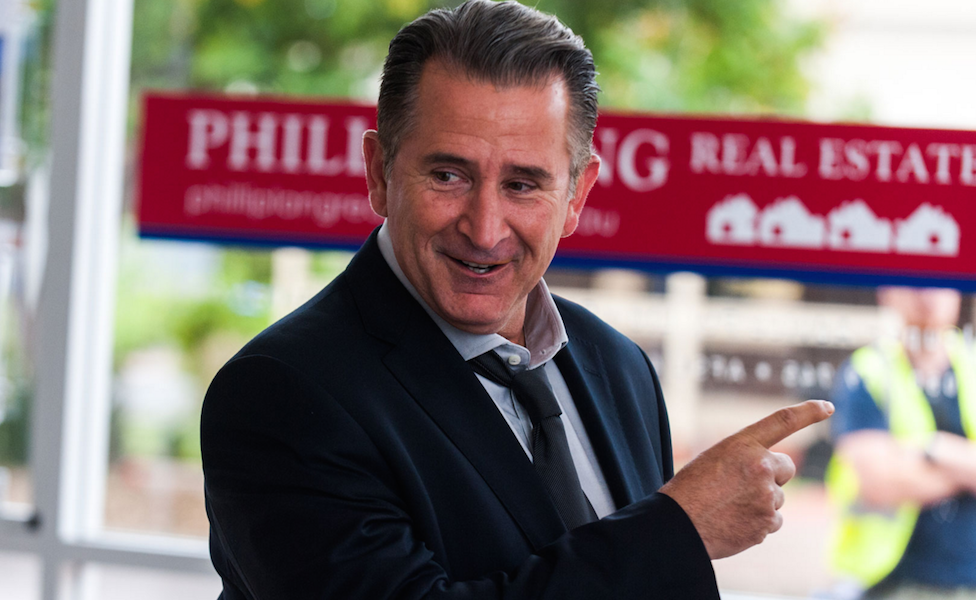 Anthony LaPaglia has one of those faces that’s instantly recognisable but hard to place.

Most Australians might do a double-take if they passed him on the street, then spend the next hour or so trying to place him.

Soon enough, they’ll realise they just passed that guy from Lantana. Or was it the dad from Looking for Alibrandi? Perhaps it was Daphne’s funny drunk brother in Frasier. Oh! Joe from Empire Records? No, no … it was definitely the main guy on Without a Trace!

Or any of the many diverse roles the 57-year-old has played throughout his 30-year career.

While he often gets typecast as the serious yet affable father figure (see Looking for Alibrandi, Holding the Man) in person LaPaglia is surprisingly ‘Hollywood’. In designer sneakers, tattoos covering his arms and a golden suntan, he’s seems like the kind of guy who drinks pressed juices, has power lunches and drives a really fancy car.

It’s true – LaPaglia lives in Los Angeles (he has for the past nine years, before that New York), owns a mansion, mingles with celebrities and his phone goes off loudly every one or two minutes. He has an air of quiet confidence and speaks eloquently and at length. He has a slight American accent on some phrases, like the words “casting director”.

His general vibe is a far cry from his latest role in plodding, low-budget Australian film A Month of Sundays, a tale of family, regret and redemption set in LaPaglia’s hometown of Adelaide.

In it, he plays impassive real estate agent Frank Mollard, who offers little in the way of dialogue or emotional connection. Frank befriends an old woman in an effort to lessen the unresolved guilt he carries for failing in his relationship to his own late mother.

LaPaglia didn’t have to do much research for the role – he recently put his Los Angeles home with ex-wife Gia Carrides on the market for $US15.5 million.

“In my life I’ve bought and sold a lot of properties so I already had my own opinion of real estate agents and most of it not good,” LaPaglia says.

“There’s something inherently dishonest about it … It’s like me being an actor. I do a film and I went in with the best intentions and it didn’t work. I have a real dilemma with asking people to separate with their 16 bucks … to see something I wouldn’t see.

“I don’t want to have to sell that but yet I’m pushed into that position and it makes me no better than a real estate agent sometimes.”

LaPaglia is very candid when talking about his career. Far from boastful, he expresses surprise that anyone would think he possesses a career worth emulating.

“I’ve met some young Australian actors and afterwards been told they were too intimidated to say anything. I’m always a bit shocked to be shoved into that realm of not being approachable,” he says with wide eyes.

“I will tell you this: I don’t think I’ve been the first choice on any movie or show I’ve ever done. I think I’ve always got them by default. The other actor passed and didn’t want to do it and I’m ok with it.

In an industry obsessed with the next big thing, LaPaglia has somehow managed to straddle both the local and overseas film industry, scoring coveted roles and critical acclaim without any of the intense scrutiny or paparazzi attention peers like Nicole Kidman, Russell Crowe and Cate Blanchett face.

Add to that the golden ticket of a main role on a long-running, popular American show (Without a Trace) and he’s got pretty much every actor’s dream career.

That’s not to say all the feedback LaPaglia receives is positive.

“Mostly it’s nice but it wasn’t that long ago I was walking down the street and a young guy goes, ‘hey LaPaglia! I hate your movies! I hate everything you do!’ It made me laugh, I said, ‘good for you! Read a book!’.”