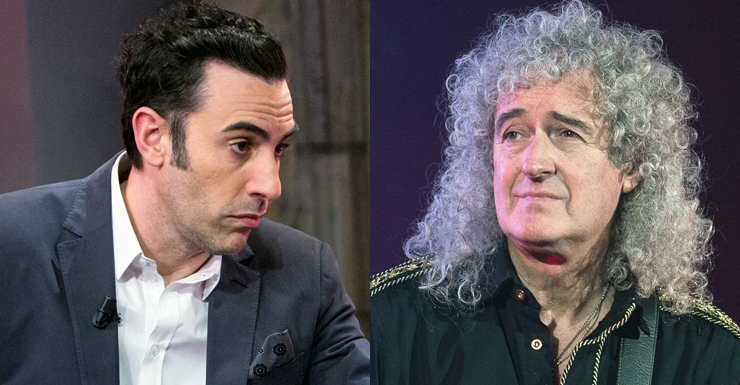 Queen guitarist Brian May has rubbished Sacha Baron Cohen’s recent films, implying the comedian was fired from the official Freddie Mercury biopic because he isn’t a “real” actor.

May, 68, told the Daily Mail on Sunday that the comedian was dropped from a planned film about the Queen frontman’s life because he “became an arse” and because his recent work failed to impress.

“We decided he wasn’t right for the role for very good reasons, which will become apparent if you watch what he’s done recently,” the musician said.

Cohen, famous for outrageous characters Ali G, Borat and Bruno, told US radio host Howard Stern in March he left the project because Queen wanted to extend the film beyond Mercury’s AIDS-related death in 1991 to show the band going from “strength to strength” – a depiction of history with which most music critics would disagree.

May denied this, saying the actor “told untruths” about the negotiation process.

“It’s obvious that it wasn’t going to work, him playing Freddie. It wouldn’t suspend your disbelief,” he said, presumably a reference to the fact Cohen is best known for comedy.

Cohen’s latest film, Grimsby, a send-up of James Bond and the derogatory ‘Chav’ stereotype of the British working class, has been widely panned by critics.

In recent years, the comedian abandoned the initial success of Ali G and Bruno, possibly because the mockumentaries relied on improvised pranks with unsuspecting interviewees, which became impossible as his fame grew.

Cohen switched to big budget, Hollywood-made scripted comedies, with far less success. The Dictator (2012) bombed, as did this year’s Grimsby.

May left his most cutting criticism for later in the interview, when he revealed the band has turned its sights to a far more rising star. According to the guitarist, Queen is hoping to sign British actor Ben Whishaw to play Mercury. Whishaw’s profile is growing thanks to a starring role in The Danish Girl (2015) and supporting role as Q in the recent James Bond films.

The musician, who happens to also be an astrophysicist, used this news to drive in the knife even deeper: “We’re hoping Ben Whishaw will do it. He’s fabulous – a real actor” (emphasis added).

After that smackdown, there’s little to no chance Cohen will return to the project, which is likely to disappoint some movie buffs, as he bears a striking physical resemblance to Mercury.

Despite May’s claim that the comedian would be out of place in a serious role, Cohen has earned praise for his rare, semi-straight performances. He played Adolfo Pirelli in Sweeney Todd: The Demon Barber of Fleet Street (2007) and Thenardier in Les Miserables (2012).