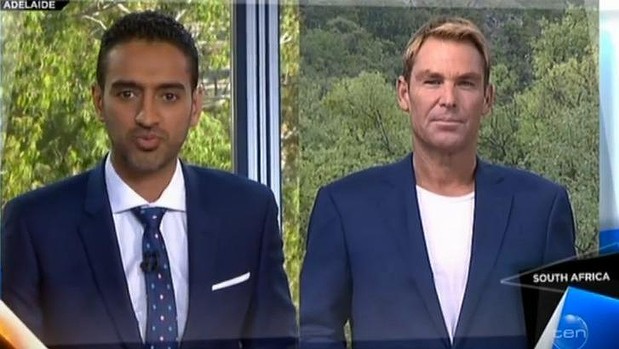 Shane Warne has Tweeted what appears to be a veiled shot at The Project’s Waleed Aly after an interview on Thursday night.

Warne, who was voted off I’m a Celebrity ... get me out of here! this week, was interviewed by Aly on Network Ten’s The Project and asked about his embattled charitable foundation.

“Now we do have to talk about the issue of your charity… there’s been the audit… what are you doing about that the moment you get back home?,”Aly probed.

To which Warne replied, “I have no idea what’s going on at the moment”, likening his stay in the jungle to a six week stay inside Guantanamo Bay.

“None of us have ever taken once cent … it’s really disappointing that people want to come after some good people that have raised a lot of money and made a serious difference to seriously underprivileged children.

“You can get all stuffed if you want to have a go at us for it but we are very, very proud of what we have been able to achieve.”

Aly replied saying he wasn’t sure if the auditors would “go and get stuffed” but that time would ultimately tell the decision of the audit.

“You’re doubting me mate? You think we’ve got something to hide?” Warne asked angrily, suddenly firing up.

“No I’m not saying anything but I’m not an auditor,” Aly replied matter of factly.

The interview seemed to wrap up congenially enough, until Warne took to Twitter to take a swipe at a certain journalist.

“Disappoints me some journo’s [sic] think in an interview being a dick is cool. Tip, if u want people back don’t be inappropriate, arrogant or smug,” posted Warne.

A Fairfax Media investigation into the Shane Warne Foundation at the end of 2015 revealed it had donated just 16 cents in the dollar of its proceeds generated by fundraising and events from 2011 to 2013.

‘You doubting me mate?’: Warnie fires at Aly