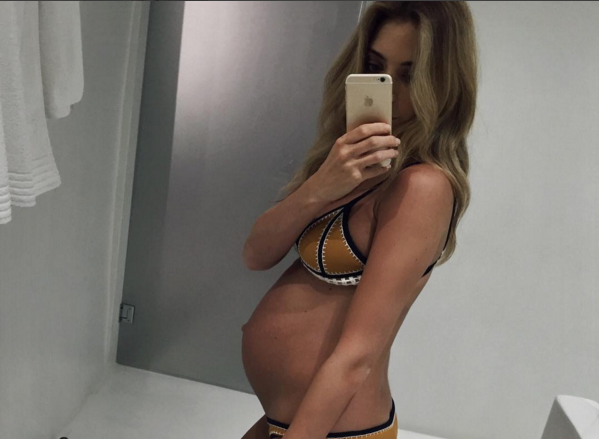 Nadia Bartel has penned a blog post about the shock of discovering she was pregnant and the criticism she has received from strangers.

At eight months pregnant, the blogger and wife of AFL star Jimmy Bartel opened up about body changes, weird cravings and dealing with the onslaught of advice first time mothers receive.

“Before getting pregnant (and now), I would never even think to comment on a lady’s bump size, (other than to think how beautiful it is),” wrote Bartel on her blog, Chronicles of Nadia.

“Or to judge her on what she is eating, wearing or how much she is working. Each to their own!

“I have had so many rude comments from strangers on the street telling me that my bump isn’t big enough and if the doctor is okay with it??”

Bartel described the shock of discovering her pregnancy after her period was a month late, and excuses she made for the lethargy and queasiness she was feeling.

“I knew straight away that something was different with my body (don’t ignore those early signs ladies) but I brushed it aside and thought I was getting my period”, she wrote.

“I was rambling to my photographer about how tired and moody I was feeling and that I thought I was getting the flu.”

Weird food cravings are a well-publicised symptom of pregnancy, but Bartel’s sudden hankering for “whole lemons (skin and all) with salt” might just take the cake.

Insisting she has no aspirations to join the hoards of ‘mummy bloggers’, Bartel also posted a series of images showing her body at the different stages of pregnancy, and described the sharp pelvic pains that have prevented her from walking recently.

“I know not everyone is keen on showing their bump, but pregnancy has actually made me feel more confident and sexier.

“I look forward to sharing more soon,” she wrote.