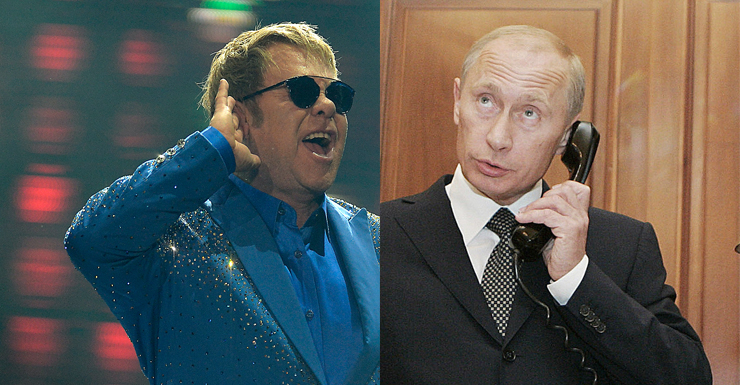 Vladimir Putin has called pop star Elton John and suggested a meeting, the president’s spokesman said, after the British singer was tricked last week by a prankster impersonating the Russian leader.

“Putin … had a talk with Elton John,” his spokesman Dmitry Peskov said. The Kremlin later confirmed the call on its website.

Mr Peskov said John did not initially believe that this time the call was for real.

“You know, he was doubtful for a while,” Mr Peskov said.

The call from Mr Putin went through Russia’s ambassador to Britain who “had some trouble explaining he was the real Russian ambassador and the real president of our country wanted to speak,” Mr Peskov said.

He said Mr Putin told the British singer not to get offended at the pranksters who called him last week pretending to be the Russian president and his spokesman.

Mr Putin said “I know that some guys played a phone prank on you. Don’t get offended at them, they’re harmless, but of course that doesn’t excuse them,” Mr Peskov said.

Mr Putin suggested a meeting with the pop legend to discuss any topic, Mr Peskov said, while not specifically referring to gay rights, which John has said he wants to debate with the Russian strongman.

“Putin said he knows what a popular performer Elton John is and if their schedules match in the future, he is ready to meet and discuss any questions that interest him,” Mr Peskov said.

The Rocket Man performer did not immediately confirm the call on his Instagram page, where he earlier announced a call from Mr Putin that turned out to be a hoax.

John last week said he had received a phone call from Mr Putin after saying he wanted to meet the president to discuss Russia’s failure to respect gay rights.

The Kremlin denied any call and it turned out that John received a trick phone call from a Russian prankster called Vladimir Krasnov, who then played a recording of the call on a television chat show.

John responded to the revelation that the call was a hoax by saying: “Pranks are funny. Homophobia, however, is never funny.”

In 2013, Mr Putin signed off on a hugely controversial law banning the promotion or display of homosexuality in front of minors.

John, who is gay, has raised more than $US321 million through his foundation for AIDS treatment and prevention.