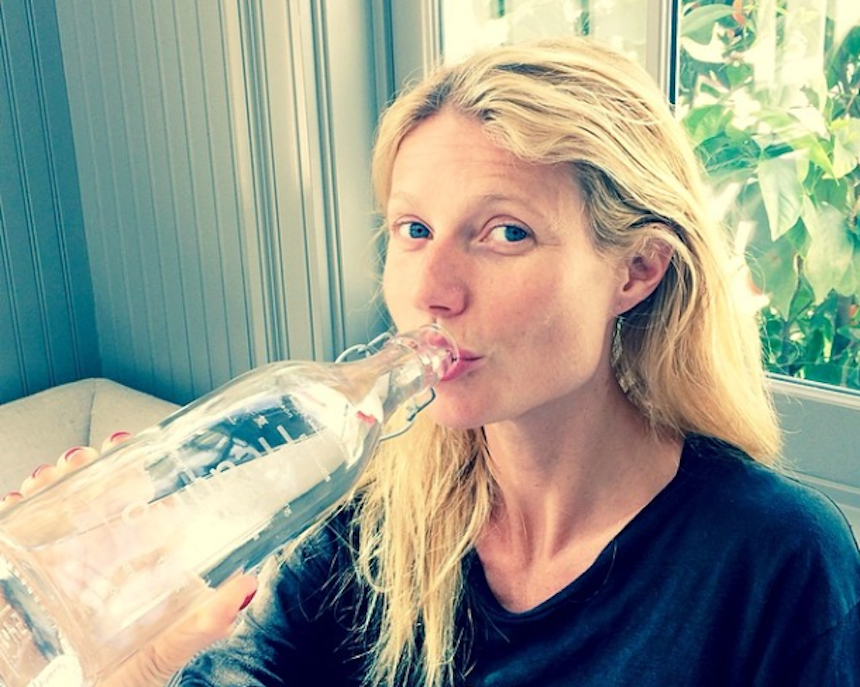 Last week, supermodel Elle Macpherson revealed she carries a urine testing kit in her handbag, prompting a collective chorus of “say what?!”.

The 51-year-old explained that measuring her urine’s pH levels helped her keep tabs on her internal health and avoid illness and infection.

Macpherson isn’t the first celebrity to tout bizarre wellness methods in the name of beauty and youth.

Gwyneth Paltrow’s Goop is full of whacky lifestyle regimes like soup cleanses and infrared saunas and Kim Kardashian caused a ruckus in 2013 by getting a “vampire facial”. Google it. Or just don’t.

A new year brings with it a whole host of new bizarre Hollywood wellness pursuits.

“It’s disturbing for serious health professionals to be seeing these things happening,” says Dr Oliver Frank, GP and senior research fellow at the University of Adelaide.

“All of this is in the realm of Belle Gibson. It’s entertainment, not healthcare.”

So should you give these trends a wide berth? Find out…

What is it? Based on the unconfirmed notion that an acidic body is more prone to disease, urine testing involves using a store-bought kit to test how alkaline your body is. Another element of this approach to wellbeing includes adopting an “alkaline diet” – eating foods with low acidity such as legumes, grains, nuts and vegetables.

Who does it? Elle Macpherson is a huge advocate of the alkaline diet after being put onto it by her nutritionist Dr Simone Laubscher.

“I noticed changes in just two weeks: I had more vitality, my skin wasn’t dry, I stopped craving sugar, my mood stabilised, everything became more balanced. A welcome by-product was losing weight around my middle,” Macpherson told Body and Soul.

The model believes most ailments come from having an acidic body.

Doctor’s verdict: “The idea about acid being bad for you has been around for a long time, but there’s no medical evidence to support it,” Dr Frank says.

“Urine is normally acidic so actually aiming to try and make it alkaline could be undesirable.

“Possibly if someone is very sick or in hospital there might be a reason to take an interest in their pH levels but not just your average person on the street.”

A photo posted by Elle Macpherson (@ellemacphersonofficial) on May 6, 2015 at 7:10am PDT

What is it? Waist training involves wearing a corset or girdle for several hours a day in order to shrink your waistline. Many of the companies selling these modern-day corsets claim their products strengthen your core, improve your posture and reduce your appetite.

Who does it? Kim Kardashian and Jessica Alba.

Doctor’s verdict: “Spanx worn under an evening gown for a short period of time is not a problem,” says Dr Eleanor Chew, a GP with the Royal Australian College of General Practitioners.

“But with a corset, you’re actually squashing your ribs and putting pressure on your internal organs. It would cause extreme discomfort and that would slow down your bowel movements as they rely on being able to move quite freely.

“You squish your tummy hard enough and you’re increase the likelihood of reflux … you’ll have shallow breathing too which is not good for clearing your lungs.”

Organizing & cleaning up before bed and waist training at the same time! Thank you to the one and only @premadonna87 @pre_shop #Premadonna87 #whatsawaist.com

What is it? A treatment offered at Korean spas which, according to Gwyneth Paltrow, involves sitting “on what is essentially a mini-throne” as “a combination of infrared and mugwort steam cleanses your uterus, et al. It is an energetic release – not just a steam douche – that balances female hormone levels”.

Who does it? Gwyneth Paltrow.

Doctor’s verdict: “So you squat over a bowl of hot water with herbs in it?” Dr Chew laughs.

“There’s a risk of you burning yourself in a very delicate area. And there’s absolutely no rationale for it to work.”

What is it: Possibly one of the more popular celebrity fads for 2015, intravenously injecting vitamins into your body seems pretty extreme. With Rihanna, Kelly Osbourne and Cara Delevigne all posting photos of themselvesto social media using a drip, the trend has received even more of a PR boost.

Vitamin drips are billed as the fastest way to boost immunity and energy. Options include Vitamin C, Vitamin B6, Vitamin B12 and other replenishing minerals and amino acids.

“We have lots of busy executives who feel their multivitamin isn’t enough,” says Dr Anh Nguyen, a wellness doctor whose Perth clinic offers vitamin drips starting at $100 per session.

“We check their liver and kidney function before we give these vitamins but most people come in because they want a boost and they’re feeling flat and down.”

Who does it: Kelly Osbourne, Chrissy Teigen, Ryan Phillipe, Rihanna and Rita Ora.

Doctor’s verdict: “The only benefit of having vitamin supplements – no matter how you take them – is if you’re lacking in that vitamin,” Dr Frank explains.

“They’re normally gotten from food. Having large amounts of vitamin C put in can cause risks like kidney stones.

“It’s a potentially dangerous thing to be doing. Useless at best and harmful at worst.”

What is it? Oil pulling involves swishing a spoonful of natural oil around in your mouth first thing in the morning for around 20 minutes to remove toxins.

Who does it? Divergent actress Shailene Woodley shared her love for the practice in an interview with beauty site Into the Gloss in which she described it as “a natural way to heal”.

“It’s amazing! It really makes your teeth whiter, because the plaque on your teeth is not water soluble, it’s fat-soluble. So the lipids have to dissolve in fats, which is why oil works in your mouth. I prefer sesame oil, but they’re both good.”

Doctor’s verdict: “The toxins theory is such a wonderful one isn’t it?” Dr Frank jokes.

“At most it’s a placebo,” Dr Chew agrees.