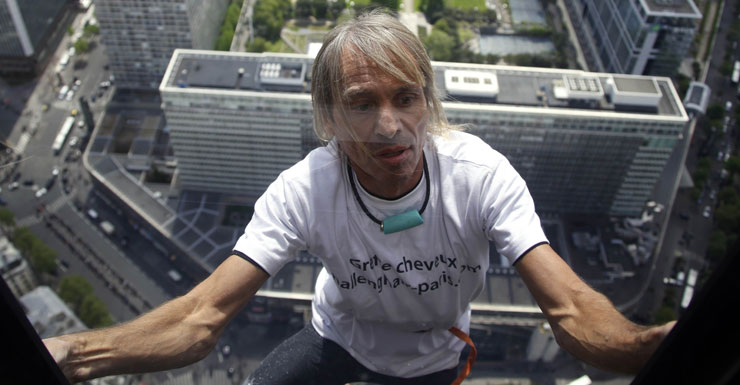 Solo climber Alain Robert, 53, has scaled a Paris skyscraper to highlight the cause of Nepal as its people suffer through the aftermath of a 7.8-magnitude earthquake.

Mr Robert attempted to fix a Nepalese flag to the building and a string of colourful prayer flags but they fluttered away before he finished the task.

The Frenchman, who suffers from vertigo while he climbs with the minimum of safety equipment, has scaled the world’s five tallest towers, and more than 120 buildings since 1994, according to Guinness World Records.

While he runs the gauntlet of mortal danger and law enforcement he said he would continue for at least the next 10 years.

Who is Alain Robert?

Father of three Alain Robert was born August 7, 1962 in the Bourgogne region of France. He is 5’5” according to his website.

Which structures has he climbed?

Why he does it?

As an eight-year-old, Mr Robert decided to spend his life rock climbing after seeing a movie on television about alpine rescuers, he said on a documentary about himself called Legend of Spiderman.

His passion evolved into scaling skyscrapers after 20 years of climbing.

“I moved on to other things, I started climbing skyscrapers, and there I found the same passion,” he said.

He was asked to scale a 40-storey Chicago building for a documentary in 1994 and did so, the Chicago Tribune reported.

“He said he had done some mountain climbing in France and he was a little bored,” said Chicago Police Lieutenant Vince Russo.

After climbing the Petronas Towers on his third attempt – two others were spoiled by police at the 60th floor – he explained his drive to continue.

“Every building I conquer gives me the sense of having been reborn – the sensation I crave,” he told The Guardian in 2009.

As with his latest ascent, the Frenchman often draws attention to causes he believes in.

To draw attention to climate change, he shimmied up the 62-storey Cheung Kong Centre in Hong Kong.

“As a public figure I know I can deliver a message because when I climb, the media follow,” The Independent reported.

His climbs have become a part of the publicity routine of new buildings, since his popularity has grown he now makes paid appearances to “christen” a new skyscraper.

Climbing glass enclosed skyscrapers risks death and punishment at the hands of police.

“The falls that he took on rocks must have calmed him forever,” fellow climber Jean Pierre ‘The Fly’ Bouvier said in the documentary.

“Apparently he has never fallen during a solo climb.

“He has always fallen when he has had ropes.”

Since the video was shot Mr Robert fell off a traffic light pole.

But the biggest danger to his success appears to be law enforcement, according to Mr Robert.

“The first two metres are always crucial – after that, my ankles are safe from the grasping hands of policemen,” he told The Guardian.

He has been arrested in Chicago, Sydney, Kuala Lumpur, New York City and Shanghai.

How does he do it?

Despite suffering vertigo, and coping with injuries sustained while climbing, Mr Robert sees no end to his efforts.

“On a climb, all my attention is focused on finding the next hand- and foothold. The gathering crowds on the street below, the cheering, the sirens – nothing breaks the spell. It’s an addictive sensation,” he told The Guardian.

The amazing ‘Spiderman’ climbs for Nepal