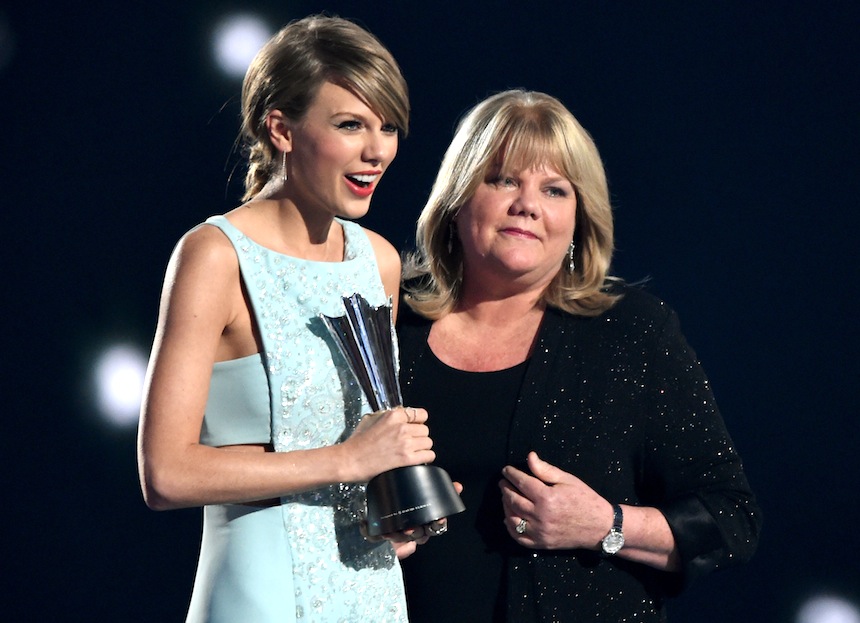 Andrea Finlay is one proud mum.

The mother of 25-year-old musical prodigy Taylor Swift, Finlay has more than enough reason to boast about her daughter at dinner parties.

Fortunately for the 57-year-old, she has a slightly bigger platform from which to celebrate her daughter’s abilities.

At the Academy of Country Music Awards in Arlington, Texas on Sunday, Finlay took to the stage to present her daughter with the Milestone award for career achievement.

Ms Finlay, who Swift last week revealed was recently diagnosed with cancer, became emotional when talking about her daughter’s transformation.

“For many years, I was her constant companion,” Finlay said.

“And I witnessed a young girl with very few friends become one with many, learning to stand up for herself and the things she believes in. Being brave enough to explore her musical curiosity, having a voice against those who hate, and giving of herself to those in need.”

“I am a very proud mom … I want to thank the entire music community for taking such good care of her. And to the fans: I know you love her as I love her. And for that, I thank you eternally.”

Finlay also explained the origins of one of Swift’s biggest hits, ‘Love Story’.

“Her dad and I strongly disapproved of a certain young man. And rightfully so,” Finlay said.

“But she was mad, she was real mad, and so she went to her room and she closed the door. And she came out about an hour later with a song called ‘Love Story.’”

Swift embraced her mother on stage before delivering an acceptance speech which finalised her separation from the country music industry following the release of her first pop album, 1989.

“You truly see who a person is when you give them news that they weren’t expecting,” Taylor told the audience.

“And so, to the country community, when I told you that I’d made a pop album and that I wanted to go explore other genres, you showed me who you are with the grace that you accepted that with.”

Finlay has a close bond with her daughter’s fans, as does her father, Scott and her brother, Austin.