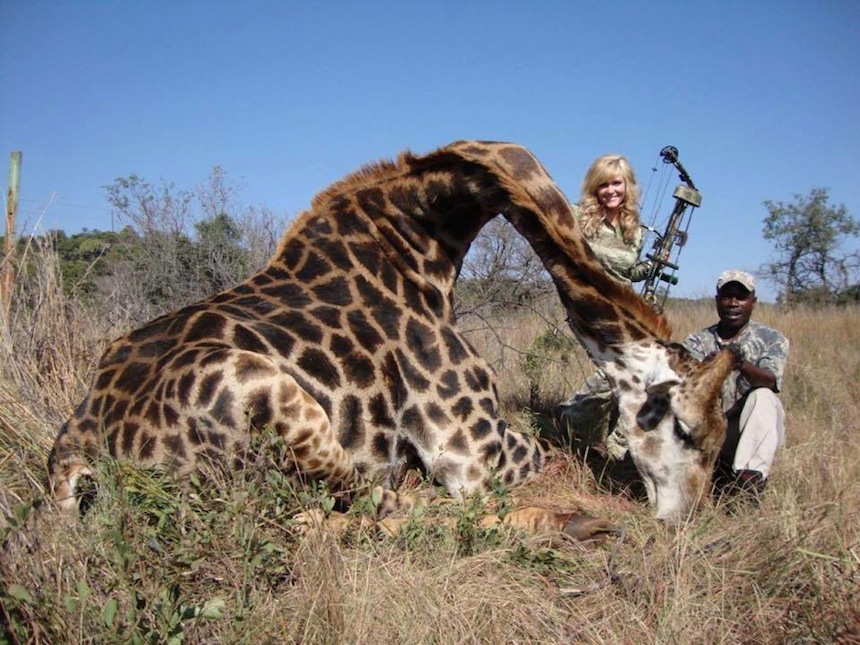 Comedian and animal activist Ricky Gervais has hit out at a hunter who shot and killed a giraffe before posing next to its dead body.

Rebecca Francis, a 41-year-old hunter from Utah, has received death threats since posting a photo of her kill online.

Francis, who won the reality series Extreme Huntress in 2010, can be seen posing next to the dead animal, smiling.

What must’ve happened to you in your life to make you want to kill a beautiful animal and then lie next to it smiling?

Gervais reposted the image with the caption: “What must’ve happened to you in your life to make you want to kill a beautiful animal and then lie next to it smiling?“.

The image has been shared more than 168,000 times and has received thousands of comments, with many Facebook users posting memes encouraging a more appropriate form of animal appreciation.

Francis responded to the criticism she received in an exclusive interview with HuntingLife.com.

“When I was in Africa five years ago I was of the mindset that I would never shoot a giraffe,” Francis said.

“I was approached toward the end of my hunt with a unique circumstance. They showed me this beautiful old bull giraffe that was wandering all alone. He had been kicked out of the herd by a younger and stronger bull. He was past his breeding years and very close to death.

“They asked me if I would preserve this giraffe by providing all the locals with food and other means of survival.

“He was inevitably going to die soon and he could either be wasted or utilised by the local people. I chose to honour his life by providing others with his uses and I do not regret it for one second.”

This Tofu & Rice was old and sad and wanted me to kill it. Now I will eat it.

According to the Giraffe Conservation Foundation, the population of giraffes in Africa has fallen 40 per cent in just 15 years.

Gervais, 53, is an outspoken advocate for animal rights who has previously posted criticism about hunters.

Earlier this month, he shared another photo of a female hunter posing with a giraffe on his Twitter account.