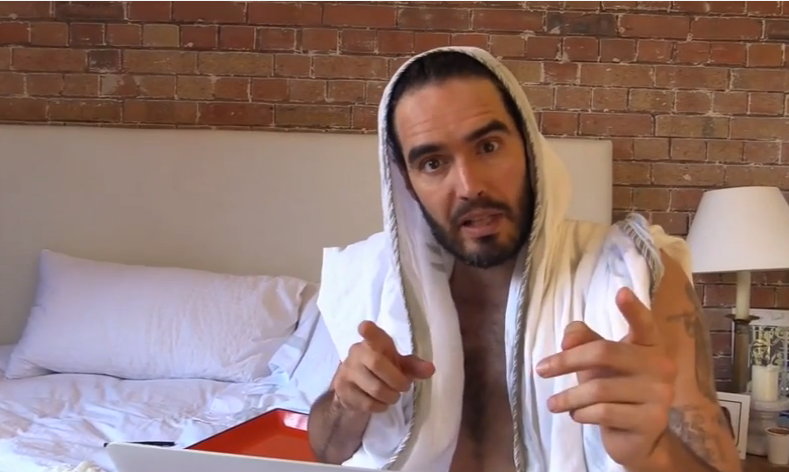 Russell Brand has denounced the Australian media and Prime Minister Tony Abbott for labelling the gunman responsible for the Sydney siege a terrorist.

The British comedian discussed the Martin Place attack in a video posted to his YouTube channel, in which he argued that gunman Man Haron Monis lacked the specific objective to make him a terrorist.

“This guy is clearly a mentally ill criminal with a long history of mental illness, criminal behaviour and lots of evidence of instability,” Brand said.

“Terrorism is typically conducted in order to meet an objective. This guy, when he was asked what he wanted, he asked for a flag and a chat on the phone with Tony Abbott. No specific agenda, no specific objective.”

Brand, who has spoken publicly about suffering from addiction and bipolar disorder, argued describing Monis as a terrorist gave his actions a sense of “grandeur”.

“By us labelling him a terrorist as opposed to a dangerous mentally ill person – not that all mentally ill people are dangerous, I’m mentally ill – and by allowing him to set the agenda of ‘I’m doing this on behalf of Islam’, it gives a certain grandeur to nihilistic and violent actions but what’s more interesting than the actions of a mentally ill person is the response of the political establishment.”

The 39-year-old actor proceeded to lambast The Daily Telegraph and Rupert Murdoch for their response to the crisis.

The Daily Telegraph was widely criticised for its front page during the siege, which read: “Death cult CBD attack”.

Murdoch then congratulated the paper for its fast response on Twitter, writing: “AUST gets wake-call with Sydney terror. Only Daily Telegraph caught the bloody outcome at 2.00 am. Congrats”.

“Congrats doesn’t seem like the right way to comment upon three deaths and a very volatile situation,” Brand said.