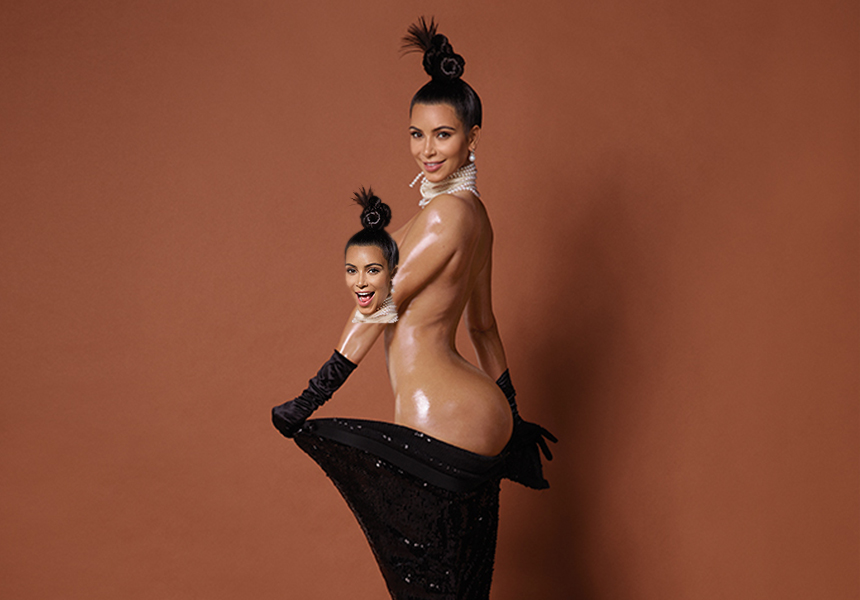 It was already the most marvelled at bum on the planet when it was unveiled – really unveiled – in a publicity stunt this week.

After making its debut, Kim Kardashian’s bronzed, oily-cheeked rump choked up Twitter, wedged itself onto homepages, clogged Facebook news feeds and otherwise spent the day mooning about every public space on the internet, and, you imagine, quite a few private ones.

But here’s the thing. Although we’d never seen it in the flesh, there was nothing new about the Kardashian behind being thrust before us. (The full shoot is full frontal, we’re told, so there’s more bum to come.)

Before now, a person needed a talent for something – sport, music, murder – to rise above the crowd. But KK broke the connection. Using publicly available means – sex tapes, reality TV – she became a global superstar. In the media age her main tool has been the media, often the free, self-managed and social kind which gives a wannabe star direct access to billions of people.

But KK’s talent is singular – it is fame itself. She has proven that craving it can be enough to achieve it. That makes her a contemporary phenomenon, perhaps the embodiment of the cultural moment we are living through. Sorry George, sorry Leo, but Hollywood stars are using the old model. You’re working for it. KK is an evolutionary leap. She’s a new and more pure kind of famous.

And it marks her as a different kind of celebrity to Jennifer Lawrence, who was splashed naked across the internet recently. Whereas Lawrence was the victim of a privacy breach, KK is giving it away.

While Kardashian was waiting, clenched with anticipation, for the cheeky magazine spread to appear, a young man from Frisco, Texas was slipping on his red T-shirt before heading off to work at the local Target.

Weeks earlier, a secret photo of Alex Lee, 16, was taken while he was filling bags at the checkout. The pic was later found on Tumblr and posted to Twitter and soon enough this once anonymous teenager was soaring to internet fame – simply because a customer thought he was cute.

“Am I famous now?” he wondered aloud to his Twitter followers, trying to make sense of what had happened, while in the car with his mum on the way home from work.

That message was retweeted 42,000 times and favourited by 86,000 users. He now has 730,000 Twitter followers. His Instagram following has hit 2.3 million. This young Texan has the sort of cultural presence that used to be reserved for extraordinary people. He’s been profiled in the New York Times. He’s met Ellen. If attention is the currency of digital media, Alex is a sudden millionaire. And there have been problems. Death threats. He hasn’t been able to leave his house. He’s been bullied and his parents have concerns for his safety.

So it is in the wake of KK’s rise to global fame that Alex finds himself globally famous. She has established a route to stardom that is now so effective, so irresistible, so disconnected from doing anything at all that might deserve our attention that it has started to ingest the unknowing and unwilling.

To put it another way, KK’s bottom has a gravitational pull so powerful it is sucking in the innocent. And if you think I am above using a black hole analogy here you are wrong. If not handled properly, Alex might find himself disappearing into one like so many before him. As I write this, only Justin Bieber’s legs are visible from outside the black hole that’s consuming him.

But here’s the really terrifying thing.

While we continue to feed Kardashian’s bottomless need for our attention, the system she perfected will find and discard more and more anonymous people like Alex.

And in case you hadn’t guessed, Alex is a proxy in this story for you and me. That’s why Kim Kardashian’s bum is a threat to us all.

Why Kim Kardashian’s bum is a threat to us all