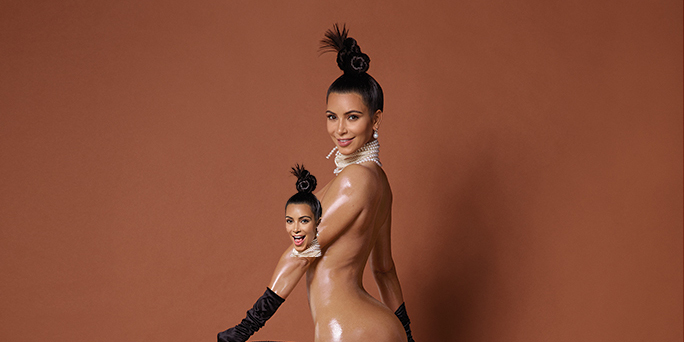 Can it possibly be real?

That’s the question everyone is going to be asking after they see Kim Kardashian’s latest magazine cover, which features an extraordinary image of her buttocks – and full frontal nudity shots within the magazine.

The 34-year-old reality television star of Keeping Up with the Kardashians was asked by New York magazine Paper to appear on the cover of its winter issue in an attempt to “break the internet”.

This attempt has resulted in several, quite frankly, unbelievable photos of Kardashian from French photographer Jean-Paul GoudeIt.

Reminiscent of Nikki Minaj’s much talked about derriere from her recent Anaconda video clip, Kardashian’s buttocks appear oiled and pert, peering out of a flimsy piece of black material, while the second cover image is a recreation of Goude’s famous Champagne Incident shot.

Whether it actually “breaks the internet” is probably not really the talking point here.

Inside the magazine Kardashian bares all, in a full frontal shot of the star certain to get tongues wagging.

As is her behind. Is it the real deal?

The interviewer from Paper isn’t so sure: “Her black hair is thicker than any you have ever seen, her lips fuller, her giant Bambi-eyes larger, their whites whiter, and the lashes that frame them longer. If some of this is the result of artificial enhancement — does anyone else have eyelashes that resemble miniature feather dusters? — none of it seems obviously ersatz. But that’s not to say it looks real, either. She is like a beautiful anime character come to life”.