Shia LaBeouf doesn’t want to be famous anymore. At least, that’s what he proclaimed in large black texta letters on the paper bag he wore to his latest red carpet premiere.

Yes, you read that right. The 27 year-old Transformers star wore a paper bag on his head to the premiere of his controversial Lars von Trier movie Nymphomaniac Volume I at the Berlin Film Festival.

This is just one move in a long string of bizarre behaviour from the outspoken LaBeouf, who walked out of a press conference prior to the paper-bag incident after being asked about the film’s explicit content.

When a reporter questioned whether he was worried about the sex scenes in the film, LaBeouf responded:

“When the seagulls follow the trawler, it is because they think sardines will be thrown into the sea.”

He then thanked the reporters and left the room. The actor was quoting French soccer player Eric Cantona, who used the same line in 1995 during a press conference after he controversially kicked a crowd member during a match.

It wasn’t the first time LaBeouf had taken inspiration from someone else; part of his recent breakdown has been his newfound plagiarism habit. His short film, Howard Cantour.com, has been accused of taking a lot of material from a graphic novel.

LaBeouf has subsequently apologized but, in typical LaBeouf fashion, plagiarized his apology tweets from Lena Dunham and rapper Gucci Mane and went so far as to hire a skywriter to express his regret.

He then dismissed it all as “performance art” a la Joaquin Phoenix circa 2010 and announced his “retirement from public life”.

Basically, it just keeps getting better.

In light of the recent attacks against my artistic integrity, I am retiring from all public life.

This latest celebrity outburst begs the question, which other stars have gone off the rails in a particularly spectacular fashion? We decided to take a look back at the most memorable celebrity meltdowns of all time. 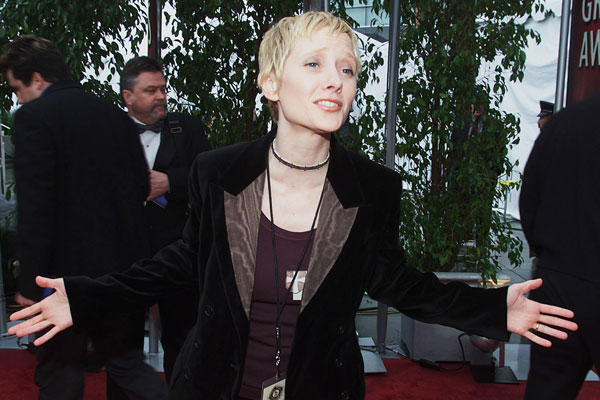 After her breakup with girlfriend of three years, Ellen Degeneres, the actress was found roaming the rural fields of Fresno, California, wearing nothing but a bra and shorts. Apparently, Heche’s car had broken down, so she proceeded to door knock in the area asking to use people’s showers and watch movies on their television and questioning them about a gateway to outer space. Unsurprisingly, a then 31 year-old Heche was hospitalized after Fresno residents called police to report a suspicious person. 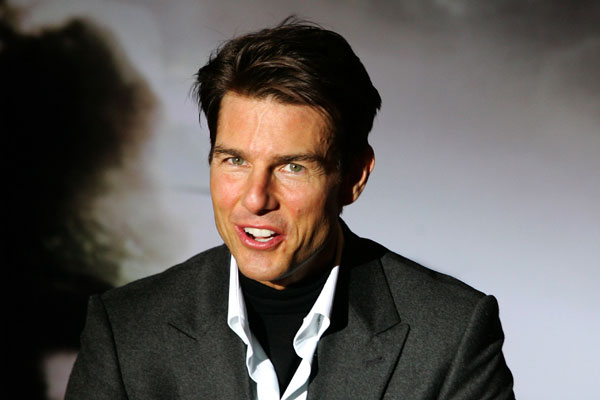 Who can forget Cruise’s bizarre appearance on the Oprah Winfrey show in 2005? The actor appeared on the talkshow crazy in love with his future ex-wife Katie Holmes. Barely able to sit still, Cruise responded to most of Winfrey’s questions by leaping up onto the couch and jumping up and down continuously.

“Something happened to you!” Winfrey proclaimed in half-terror, to which Cruise responded “I’m in love!” He then proceeded to drag his girlfriend from backstage and kiss her in front of the crowd. They were married a year later and divorced in 2013, with the actor admitting that his religion, Scientology, was a factor in their breakup. 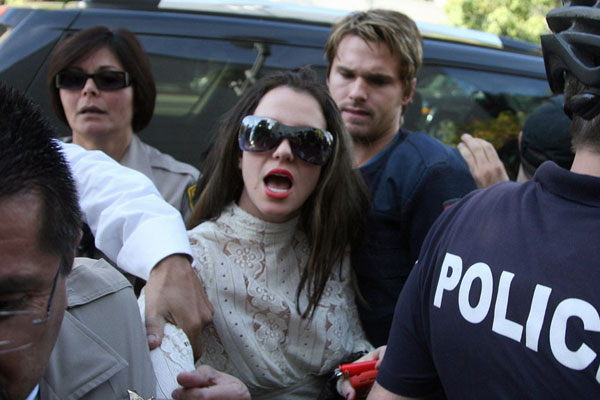 Caught in a bitter custody battle for her two sons with ex-husband Kevin Federline, the pop-star fell to pieces.  In February 2007, Spears shaved all of her hair off and later attacked photographers and a car with an umbrella. Her erratic behaviour meant that she lost custody of her children and Spears responded by barricading herself and her kids inside her home during an approved visit.  Rumoured to be taking a cocktail of drugs, the dramatic standoff ended with Spears being removed from the house on a stretcher and placed in psychiatric care. 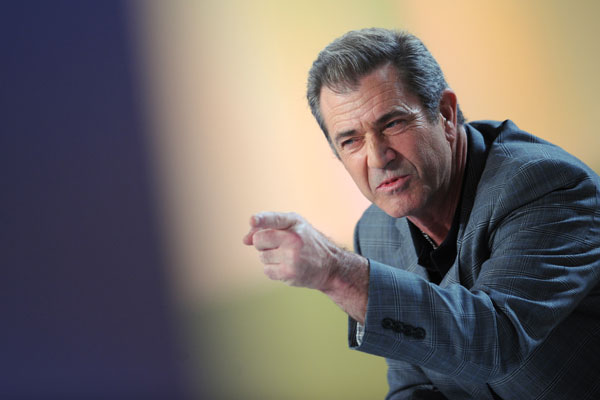 Putting the Mel into meltdown, Gibson verbally abused his ex-girlfriend Oksana Grigorieva over voicemail during a custody battle for their daughter, Lucia. Gibson, who has a history of anger management issues (including an anti-Semitic rant) compared his Russian former flame with “a pig in heat” and used racist slurs, threatening to kill Grigorieva.

Gibson later apologised, telling Deadline in 2011, “You have to put it all in the proper context of being in an irrationally heated discussion at the height of a breakdown, trying to get out of a really unhealthy relationship. It’s one terribly awful moment in time, said to one person, in the span of one day and doesn’t represent what I truly believe or how I’ve treated people my entire life.”

You can listen to the recording of the rant below, but be prepared for some disturbing, horrible language. 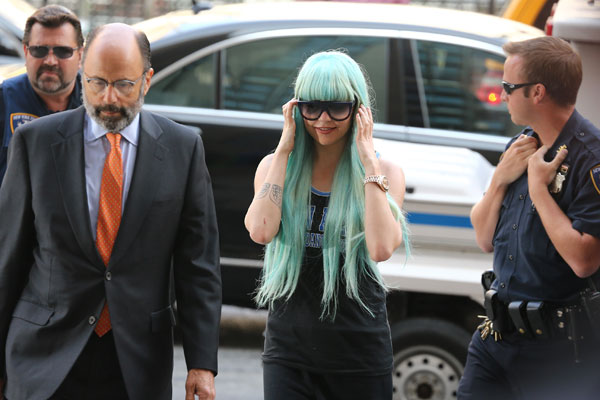 The child star shocked the public when she transformed from loveable teetotaller to drug-addled, troubled mess seemingly overnight. The former Nickelodeon star’s transformation was physical as well as mental, abandoning her wholesome girl-next-door looks for cheek piercings, tattoos, dyed blonde hair and revealing clothing in an effort to look like American stripper Blac Chyna. Bynes then began a Twitter tirade against “ugly” people, telling singer Rihanna that “Chris Brown beat you because you weren’t pretty enough”.

In May 2013, she was arrested for throwing a bong out of her apartment window in New York and subsequently accused the arresting officer of sexually assaulting her. Bynes appeared in court wearing a blonde wig and a mugshot revealed that she had shaved her head. The nightmare reached its peak in July, when Bynes appeared in suburban California, lighting a fire on the driveway of a stranger and accidentally burning her dog. Bynes was hospitalised and placed on psychiatric lockdown before her parents took over. She is now undergoing treatment for schizophrenia and bipolar disorder. 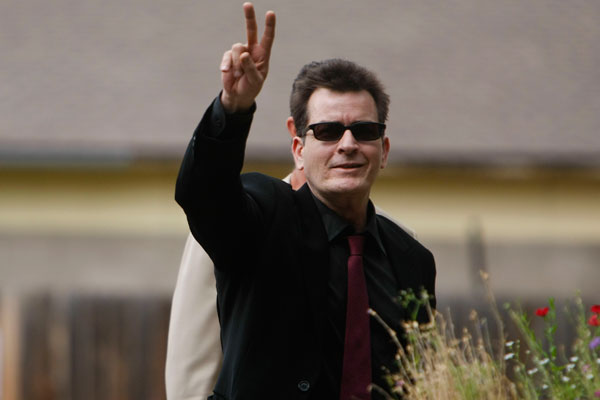 After Sheen lost his two daughters in a custody battle with ex-wife Denise Richards in 2010, he underwent a very public breakdown which culminated in a two-week bender in 2011. The actor, who had struggled with drugs in the past, entered rehab in January 2011, emerging only to deliver a series of strange television interviews in which he denounced the creators of his successful show, Two and a Half Men. The network behind the show, CBS, fired Sheen due to his erratic behaviour, replacing him with Ashton Kutcher.

Sheen responded to his sacking by climbing on the rooftop of a building, brandishing a machete and yelling “Free at last!” He then embarked on a a national tour titled My Violent Torpedo of Truth/Death Is Not an Option which earned him audience boos, walkouts and more public scrutiny. The meltdown knows no end, with Ashton Kutcher today telling Sheen to “shut up” during a Twitter battle, to which Sheen responded that he would put Kutcher on “a hospital food diet for a year”. Good Lord. 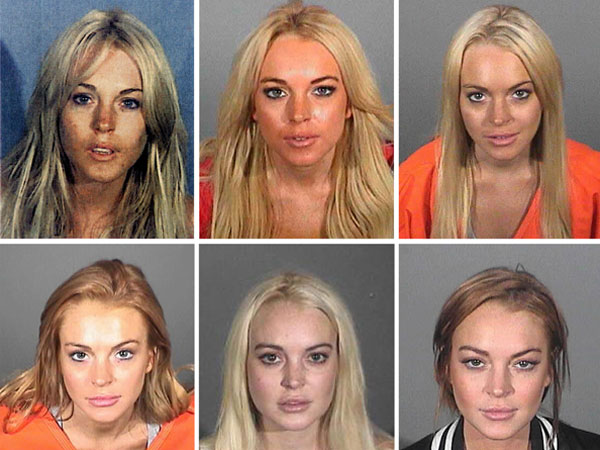 The troubled child star’s breakdown has been never-ending, with mugshots and court appearances aplenty. During her eight-year downfall kicking off with a DUI arrest in 2007, Lohan has struggled with alcoholism, drug abuse, addiction to Adderall, reckless driving, rehab, imprisonment, theft (being both the victim and the perpetrator), on-set drama, estrangement from her mother and father, car accidents, ruthless paparazzi and physical violence. Phew. 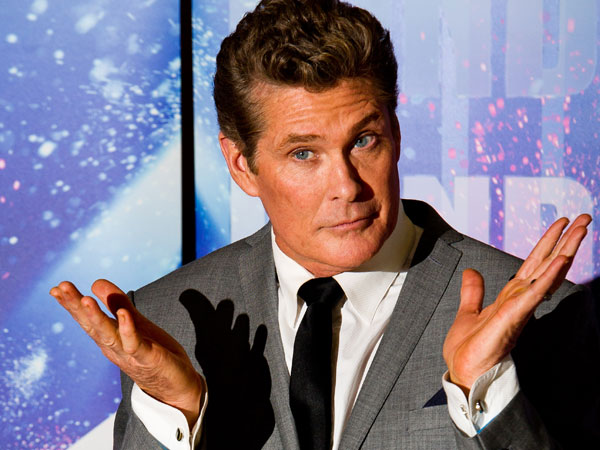 In May 2007, the former Baywatch star’s daughter uploaded a photo of him drunkenly eating a cheeseburger in an effort to get him to quit drinking. The star, who was battling alcoholism, blamed his drinking on “loneliness”. He later said he was thankful his daughter videotaped the incident (which went viral), saying,

“When I found out about the tape, I was overcome with an amazing sense of calm. God was basically saying, ‘It’s time to stop’. I knew why Taylor did it: she was afraid for me. I said, ‘That’s pretty cool that my daughter loves me to say, ‘Dad, this is what you look like. We’re scared’. End of story.” 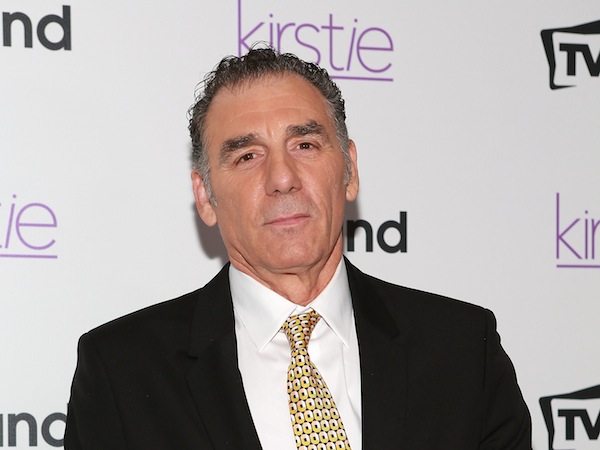 Richards, aka Kramer from Seinfeld, spewed racial slurs during a stand-up show at The Laugh Factory in November, 2006. Repeatedly using the n-word, the actor and comedian angered audience members and lost the respect of an entire industry.

His attempts to apologise and pass the incident off as an angry and selfish response to being heckled went largely unnoticed. 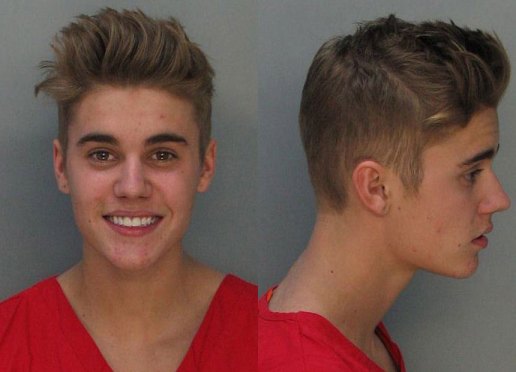 The 19 year-old Canadian pop icon hit rock bottom in January this year when he was arrested in Miami for speeding, driving under the influence of drugs and alcohol and drag racing. Bieber’s jet was also later searched on suspicion of ‘weed’ on its way to the Super Bowl. It didn’t come as a complete shock that the star ended up in hot water as he had been exhibiting strange behaviour for a year: purchasing a pet monkey, graffiti-ing a Queensland hotel and being filmed peeing in a bucket while insulting former US president Bill Clinton.

The young singer is also facing assault charges for an alleged attack on a limousine driver in Toronto in December, 2013 and may face vandalism charges for egging his neighbour’s property and causing $20,000 in damage.

We can only hope the star learns from his mistakes and gets back on the right track before the head-shaving, umbrella-wielding, angry voice message-leaving phase starts.