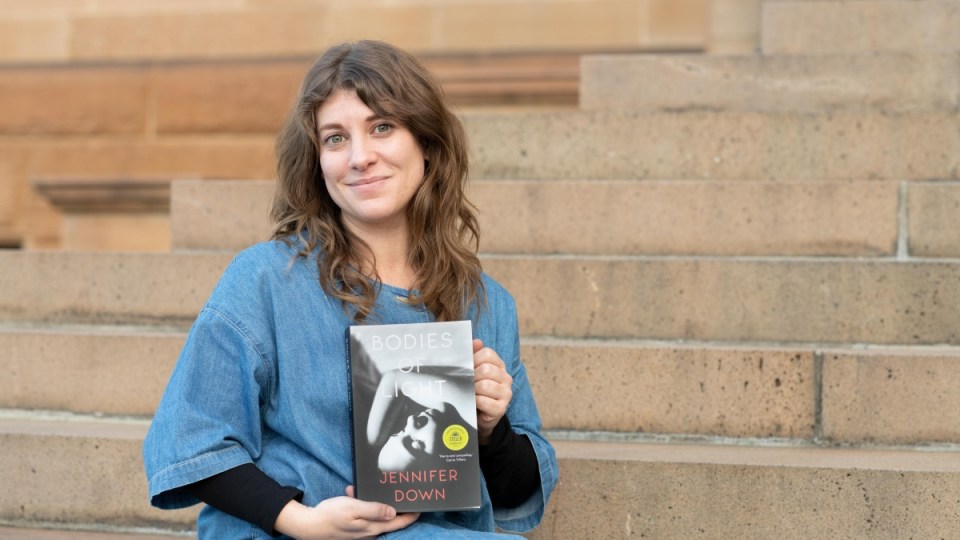 Jennifer Down has won the Miles Franklin Literary Award for her novel, Bodies of Light. Photo: AAP/Monique Ferguson

Jennifer Down has won the 2022 Miles Franklin literary award at the age of 31 for her novel Bodies of Light, becoming one of the youngest authors ever to take out the prize.

“I feel very lucky, I still can’t quite believe it,” the Melbourne writer told AAP.

The $60,000 prize was awarded at a ceremony held online on Wednesday.

Bodies of Light tells the life story of a woman who suffered systemic abuse growing up in state care in the 1980s, and who moves to Canada under a new identity.

A big congratulations to our 2022 Miles Franklin Award winner Jennifer Down for her novel Bodies of Light published by @text_publishing.#MFLA2022 #MilesFranklin supported by @perpetual_ltd, @CopyrightAgency Cultural Fund, and ABC @radionational. pic.twitter.com/Ai5n8BHU7G

Ms Down began writing the book in 2017, reading accounts from parliamentary inquiries into systemic abuse and conducting interviews with survivors keen to talk.

But even with two well-regarded books already under her belt – the first published when she was 25 – at times she believed she might not ever finish Bodies of Light.

“I always have the sensation that I’m learning to do this for the first time … I hope I’m trying to challenge myself to write things that push me in some way,” she said.

At 448 pages, it’s much longer than her previous works and has drawn comparisons to Hanya Yanagihara’s 2015 epic A Little Life.

Ms Down promises Bodies of Light is nowhere near as dark as Yanagihara’s trauma novel, but said she would not hold it against anyone if they chose happier bedtime reading.

“It’s a good one to read when you’re in the right emotional state, you’re feeling secure or you need a really good cathartic cry, a really snotty cry,” she said.

While Ms Down, from Melbourne, is aware of the sales boost that comes with the Miles Franklin, she said she tries not to get caught up in the arbitrary world of book prizes.

“You have to just expect nothing and appreciate everything – while that sounds very zen I’m actually a very neurotic person – it’s more like a self preservation,” she laughs.

“To be appearing on a shortlist alongside those names, it really just feels like a tremendous stroke of fortune,” she said.

The youngest Miles Franklin winner is Randolph Stow, who was awarded the prize at the age of 23 with To the Islands in 1958.