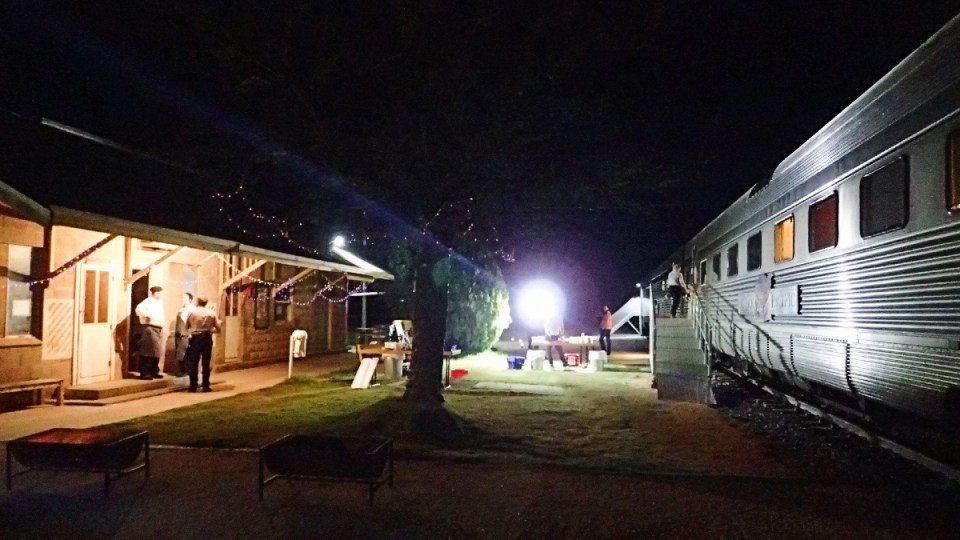 The Indian Pacific at Rawlinna, Western Australia, for dinner under the stars. Photo: Tim Richards.

Dinner was taken outside the train at Rawlinna, another ghost town that lay next to a vast sheep station of the same name covering 10,000 square kilometres (that’s 0.48 Waleses; 0.33 Belgiums).

I was feeling antsy as we were led through two carriages as a group, to disembark and be marked off a list. The Indian Pacific crew shared the mother hen characteristics of their Overland colleagues, though in a place this remote it was understandable.

Except for the short stop in Cook, I’d been aboard the train for almost twenty-four hours and was I dying to get outside.

That was the problem with Desert Day: there weren’t many places that  could be used for off-train excursions. Tables had been set up in the space between the train and the derelict former post office and railway station buildings. 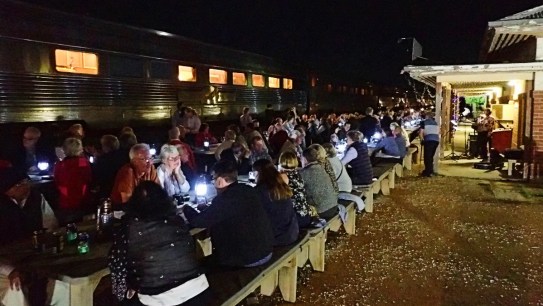 It was a clever idea to dine under the sky in this forgotten corner of the outback, amplifying the contrast of the comfort aboard with the emptiness outside. Food was being catered from the train’s galleys to the tables, with sunset succeeded by stars as we ate.

I was seated next to Derek, a bloke in an Akubra who worked for a Sydney company that recycled building materials. As we worked through the main course – lamb or fish with roast vegetables – we talked about his job.

A man seated across from us heard this and chimed in. 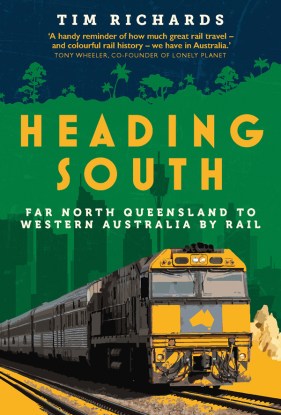 ‘I collect bricks,’ he said. ‘I have a big pile of them outside the back of my place – my whole yard’s full of them.’

For a moment I thought he was joking – he had a laconic delivery style that hinted he might be taking the piss – but when I asked about his oldest brick he had an answer.

‘It’s from 1865; the year is written on it. They were demolishing a house in Maitland and most of the bricks were going to the council’s museum. I asked, “Can I have one?” A few weeks later, it turned up on my doorstep.’

Ian was concerned about Derek’s job. ‘Please don’t crush too many bricks,’ he said.

‘Sorry, mate, it’s how we make money,’ said Derek. Then, thoughtfully, as if concerned for Ian’s feelings: ‘We never see those convict bricks anyway.’

I had started out thinking Ian eccentric, but his enthusiasm for bricks was strangely infectious.

As he explained the origins and properties of his collection – some older bricks needed to keep damp, apparently, so it was fine to keep them in his backyard – I started to see the heritage appeal. Every brick had a story, as it were.

‘Mind you, my family want me to put them all in a skip.’

‘No, to chuck them out!’ said Ian with a smile, aware at least of how his hobby could look to others. I asked Derek if he was proud of his recycling work.

‘Well, we’re going to run out of landfill eventually, right?’

After dessert I wandered to the far end of the tables, where the train crew were packing up. Fires were burning in cut-off metal drums, fairy lights were wrapped around a tree, and battery-powered lamps illuminated the tables. In this soft light, photos with the train as a backdrop looked atmospheric.

This is an edited extract from the book Heading South: Far North Queensland to Western Australia by Rail by Tim Richards (Fremantle Press). The book is available in all good bookstores and online. https://www.fremantlepress.com.au/products/heading-south