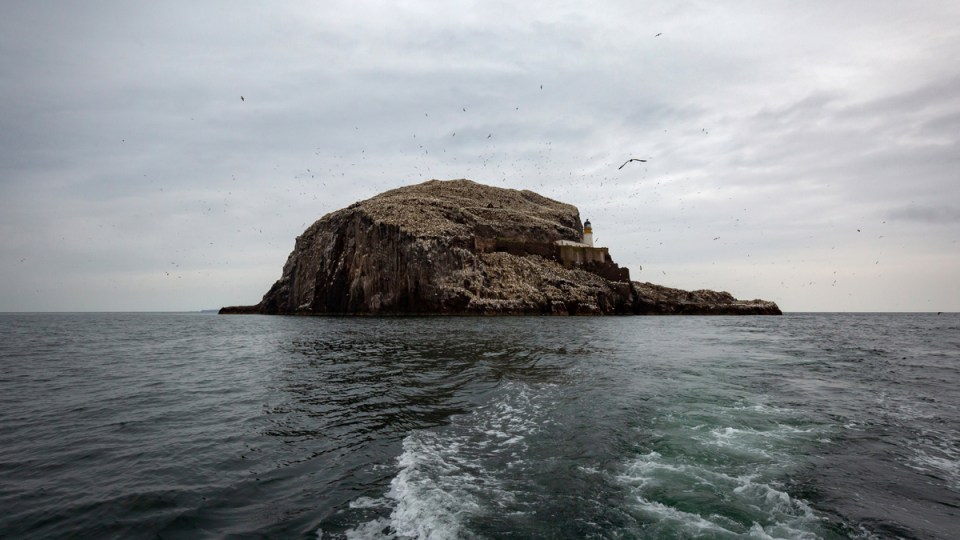 Bass Rock, off the Scottish coast, is the setting for the Stella Prize-winning novel. Photo: Getty

A novel set across four centuries, about three violently abused women, was awarded the $50,000 Stella Prize for Australian women’s writing on Thursday night.

A kind of mystery story with murders and ghosts, The Bass Rock by Evie Wyld is also an epic tragedy, but told in spare, evocative vignettes with the powerful rhythm of waves crashing on rocks.

Picking up on what reviewers said about this uncanny but all-too-realistic novel, the Stella announcement calls The Bass Rock a “Gothic tale of toxic masculinity”.

Once named by a British literary magazine as one of a group of “Best Young British Novelists”, Wyld is also frequently claimed as an “Australian writer”, the duality arising from her Australian mother, and her time spent living here before she returned to England, where she’s now part-owner of a bookshop and a creative writing lecturer.

In 2014, the year after that Best Young Brit accolade, Wyld won a Miles Franklin Award in Australia for the equally dark All the Birds, Singing.

That novel, also set on a bleak British coast, was not shortlisted for the Stella that year, pipped by a seriously stellar stack of books including Hannah Kent’s Burial Rites and Alexis Wright’s The Swan Book.

In a new decade and for the ninth Stella Prize, The Bass Rock proved irresistible for this year’s judges.

Up against a shortlist that included Louise Milligan’s line-in-the-sand Witness as well as Laura Jean McKay’s prize-winning pandemic novel (written before COVID-19), The Animals in That Country, The Bass Rock is, according to judging panel chair Zoya Patel, a “consuming and perplexing book … a true work of art”.

The Stella was set up in 2012 to counter the imbalance between prize-winning books by men (many) and books by women (rare), particularly the Miles Franklin Award.

As one of the founders, Sophie Cunningham, has written the very existence of the Stella may well have contributed to changing that dramatically.

Since Carrie Tiffany’s Mateship with Birds was named inaugural winner in 2013, the landscape has shifted quite rapidly again: The prize now states explicitly that women and non-binary writers are eligible.

Non-binary writer SL Lim, shortlisted for the Stella this year with Revenge: Murder in Three Parts, referred to another prevalent and continuing controversy around the need for historical revisionism when they told the ABC, “Miles Franklin was a fascist. Prizes should not be named after fascists”.

Although that challenge to the name of this prize (chosen to reclaim Stella Maria Sarah Miles Franklin’s first name) is unresolved, under the direction of Jaclyn Booton who was appointed in December 2019, and sponsored by The Wilson Foundation, the prize works hard to be transparent about what it is rewarding and why.

It was possibly, nevertheless, a tricky discussion for the judges  – Patel along with First Nations Literary Festival director Jane Harrison, critic Elizabeth McCarthy, review editor Ian See and event programmer Tamara Zimet – to award a book for Australian women writers to such a Scottish novel.

Place is, as Wyld has said in an interview, where she starts; Bass Rock is a lump of gannet-inhabited land in the gloriously named Firth of Forth which is, a character in the novel says, “like the head of a dreadfully handicapped child”.

She also says in interviews that she wrote the novel snatching sleep-deprived time between baby feeds, cutting and pasting to make it all fit together in the end.

This wry and modest explanation is challenged by the comments of Patel, who notes the “unique narrative structure”, referring to the way the three women’s stories are told through different narrative voices.

Booton was also startled by the book’s style, calling it “unlike anything I’ve read before”.

With eight out of the past nine Miles Franklin Awards for an Australian novel having been won by females, the Stella’s point of difference as a prize for fiction or non-fiction may be high on the list of reasons for its continuance.

Those involved in setting it up describe it as “force for good” and an “ode to determined women”. Cunningham recalls thinking “Enough talking, it’s time to do something”, a thought that has been voiced many times already this year.

A year back, when The Bass Rock was about to be published, Wyld did a Q&A with Ursula Kenny for The Guardian, which suggests how very much on the cusp of the zeitgeist her novel was.

Asked about drink spiking and rape, she described how she passed out at a publishing do, and woke “with some quite elderly man snogging my face”.

When she’s asked about the rage that ripples through the book, she says It “probably comes from it being ingrained …we’re not supposed to be angry, or we aren’t angry, we’re ‘hysterical’, ‘difficult’.”

A year on, if those comments from a 40-year-old internationally acclaimed novelist were made today, they would probably be spotlighted more intensely, as there is so much more context for her experience and possibly more interest now in understanding it.

One of the stories in The Bass Rock, the one from the 1700s where women blamed for men’s sexual violence would be called – literally – witches, is narrated in the first person by a young man.

Here, again, is why this novel seems so timely and precise: This boy is the embodiment of centuries of masculinist cruelty and prejudice so Wyld lets him speak, and dares us not to listen. To imagine that boy, what has made him and who has influenced him, is a brave, difficult, urgent task for a writer. In Scotland and Australia both.

While this is a literary prize, and Wyld is no outsider, widely read and admired, a comment by Karen Wilson from the sponsoring Wilson Foundation makes it clear she’s aware that a Stella winner about “toxic masculinity” is a logical follow-up to last year’s winner, which was Jess Hill’s book about power, control and domestic violence, See What You Made Me Do.

“Over the last year”, Wilson says, “the voices and stories of many more courageous Australian women are now finally being heard.”

The question that next needs to be addressed is, by whom?

Between a rock and a hard place, evocative Stella winner gives voice to courageous women