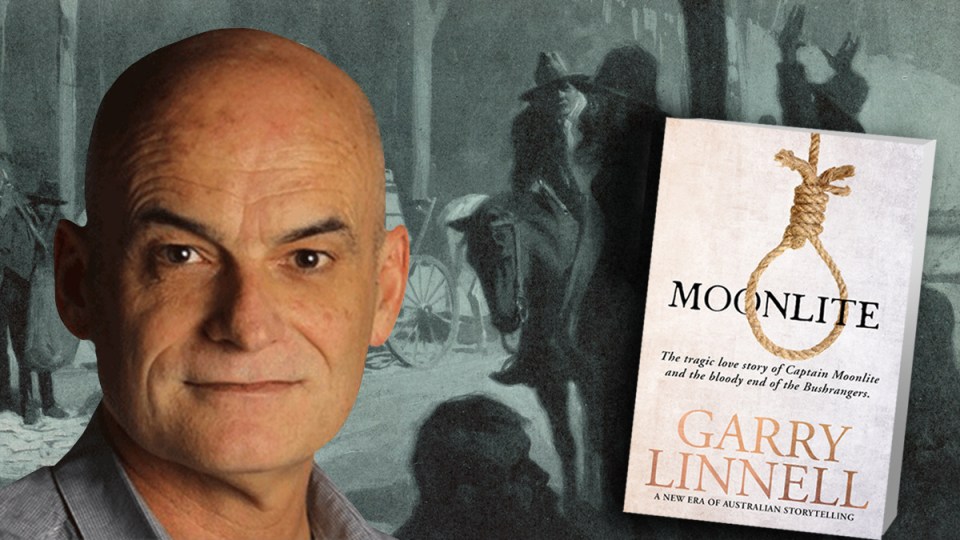 'Moonlite' is the epic true story of one of Australia's most infamous criminals, Andrew George Scott, likely the first openly gay bushranger.

On this Monday evening, a half-moon hanging in the sky, Andrew George Scott is alone in his cell in Darlinghurst Gaol. A candle burns in the corner. His face, once handsome and filled with a lustrous black beard, is hollowed and flecked with several days’ growth. The pits of his blue eyes, which once burned so fiercely, are now just soft embers. He is tired – he has barely slept in recent days – and fatigue has increased his agitation.

There is still so much to do. So much to say. So many letters to write. So many farewells to make. His final visitor left a while ago and now his world, which was once so large and filled with such endless possibilities, has been reduced to walls of cold brick and an iron door.

Scott turned 35 just over a week ago and in the morning he is due to die. On his father’s birthday, too. But it is not so much the timing, or even the prospect of a premature death, that gnaws at his insides and forces his jaw to clench. It is the manner, the style of his execution, that disturbs and upsets him. Where is the dignity in his life ending on the gallows, arms pinioned, a cloth sack over his head, just to spare all those spectators the gruesome sight of his eyeballs bulging and his tongue hanging as the rope does its work?

Why couldn’t they simply use a bullet? His heart is already broken beyond repair. Just a small piece of lead shot straight through it would at least allow him to die with some semblance of honour.

It’s a word Andrew George Scott uses often. He clings to it like a capsized sailor clutching driftwood because it is all he has left. His honour. His dignity. It was not the bullet from his gun that had killed the policeman during that bloody siege and shootout a couple of months before. He thought he knew who had fired the fatal shot. But honourable men who had been raised to believe in the ideals of gallantry did not stand before a belligerent judge and a hostile courtroom and identify a friend as a murderer. So he had refused to reveal the truth. Not that it really mattered. They were always going to hang him. What else could they do?

The whole town – and if you believed the newspapers, the entire bloody country – has been calling for his head. He had seen the hatred and spite in their eyes as the train carrying him to Sydney for his trial stopped at all those small bush towns. They had pushed and shoved and crowded their way on to the small platforms throughout that dark night, red-faced and sweating in the early summer heat, trying to catch a glimpse of the man they called Captain Moonlite. One of the last of the bushrangers. Ruthless killer of a brave policeman. Slayer of a courageous officer who had been father to a young boy and husband to a devoted wife.

He knew then that it could end only one way. They would hastily put together a sham trial to show justice had been done. The jury would include a madman who could barely comprehend English. They would appoint a bellicose judge with a strong connection to the Wantabadgery Station where one of the gunfights with the police took place. They – the politicians and the corrupt police – would make sure the verdict was never in doubt.

He goes to his death an innocent man with his honour intact. Another member of the Moonlite gang, Tom Rogan, will also swing alongside him. Didn’t that tell you everything you needed to know about the farce this whole affair had become?

Poor old Rogan. He hadn’t fired a single shot in anger. In fact, he’d had no idea how to use a gun and had spent 24 hours during and after the siege hiding beneath a bed, crying and praying to his Catholic God.
Scott had joined others in pleading for Rogan’s life, hoping they might commute the death sentence as they did for two younger members of the gang – Graham Bennett and Thomas Williams.

But the government is determined. It is time to end the era of bushrangers. Ned Kelly and his gang might still be at large in Victoria, constantly embarrassing and humiliating the authorities, but the colony of New South Wales will set an example the rest will be forced to follow.

For too long these outlaws have roamed outlying areas, raiding farms, murdering innocent people and, quite incredibly, earning fame and even admiration among the lower classes. Surely the nation is old enough to shrug off its convict past and all the lawlessness that went with it. A message must be sent.

So Scott had reluctantly given up the battle to save Rogan’s life and instead turned to fight another cause from inside his cell. He wants it known that it was only his closest friend, the man he loved like no other – his soulmate who died in his arms with blood spilling from his temple from a policeman’s bullet – who had stayed his hand and prevented him from taking the lives of half a dozen officers.

Scott had met James Nesbitt in Melbourne’s notorious Pentridge prison when the legend of Captain Moonlite was already growing and he was serving time for one of the most audacious bank robberies Australia had seen. From the start he had loved the man. To others it seemed Nesbitt was like so many other young and broken men prone to falling under Scott’s charismatic spell. Nesbitt came from a home where neighbours cringed every time they heard screams, a sure sign the old man had embarked on one of his regular drunken, wife-bashing sprees. The son had become a petty thief because life offered little else.

But there was something more to young Jim, something Scott believed only he could sense. A deep-seated decency. An innate desire to do the right thing. With his jug ears and full lips and honest stare, Jim Nesbitt knew how to calm and placate the man he always called George. If Scott was an unbroken stallion, wild and untamed and with more than a glint of madness in his eyes, Nesbitt was the patient, softly whispering horse-breaker.

During the final gun battle, during those awful minutes as bullets flew and men screamed and the air filled with the acrid stench of gunpowder, it had been Jim who told Scott to stop firing at the police. He had placed his hands on Scott’s shoulders and drawn him gently toward him. And then he had looked his friend in the eye and pleaded with him. Enough was enough. This madness had to end.

‘George, for my sake, shed no more blood,’ Nesbitt had told him. ‘Promise me not to.’

Scott, his Irish blood coursing through him so hard he could almost hear it, his ego urging him to go outside and take on the entire force, had stopped and listened and obeyed.

And then a bullet had splintered a nearby window and pierced Jim’s temple.

This is an edited extract from Moonlite by Garry Linnell, published by Michael Joseph, RRP $34.99, available Tuesday.

Garry Linnell: The tragic love story of Captain Moonlite and the end of the bushrangers