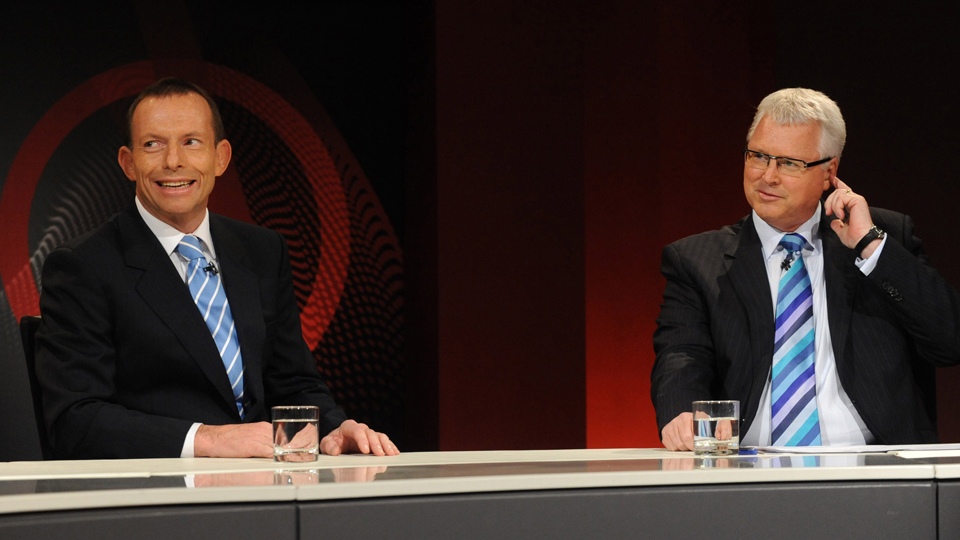 Famed for retorting, “I’ll take that as a comment” when a Q&A audience member went off on a rambling trek in dire need of a question mark, four-time Walkley-winning ABC journalist Tony Jones is about to give it all away.

Relocating to China at the end of the year, Jones – who will be replaced by Hamish Macdonald on Q&A in 2020 – is looking forward to embracing novel writing mostly full-time.

He’s just begun work on his third political thriller after 2017’s The Twentieth Man and its loose sequel, the recently-published In Darkness Visible.

Both feature Anna Rosen, whom Jones calls a, “feminist, radical, really extraordinary investigator and tough-minded journalist,” who in the latest outing attempts to track down a former lover and possible war criminal.

I suggest the description also fits his wife, Sarah Ferguson, whose appointment as chief of the ABC’s China bureau is behind the couple’s move from Australia.

Jones, 64, agrees as we talk in the bar at Melbourne’s The Olsen hotel, then explains how the move will change his professional life.

“[China] won’t give me a working visa as a journalist,” he says, smiling.

Instead, the public broadcaster will tap him to cover occasional stories in the surrounding regions.

“The way they put it was, how Jon Snow of the BBC pops up in different places, looking sort of slightly overweight, pompous and white-haired,” Jones says.

Writing himself a new life as an author has seen Jones jet around Australia on a book tour but a highlight was when he and Ferguson first saw copies of the book.

“Books mean a great deal to both of us, so when the box of them arrived on the doorstep, it was almost tearful,” he says.

“It’s an unexpected pleasure to see and hold it, feel the weight of it, and then see it in bookstores.”

A gripping read, In Darkness Visible draws on his extensive work in the field with a particular focus on Communism and also traces the flight of Nazis given new identities in return for providing useful information during the Cold War.

Jones became European correspondent for the ABC in January 1991, just after the fall of the Berlin Wall.

He met Ferguson, 53, with whom he has two sons (he has another from a previous relationship), in Paris towards the end of his time there.

No romantic story is volunteered: “We just stumbled across each other really.”

Notes he took then about places he visited feed into the book’s palpable sense of time and place.

“I hope that the fiction tells truths,” Jones says.

“The overwhelming question is, are the sins of the father visited upon the son?”

He and Ferguson have worked on one final project together before the big move.

“I think it’s going to be one of the more remarkable pieces of television,” Jones says of the show that will air next year.

Away from the coalface, his idea of bliss is floating over coral on a remote Fijian Island and re-reading Patrick O’Brien’s Aubrey-Maturin novels, adapted into the Russell Crowe movie Master and Commander: “Some people describe it as Jane Austen at sea.”

A huge fan of Tolstoy, historical epics and fraught politics are catnip for Jones, who the day we met picked up a newly translated copy of Stalingrad by Vasily Grossman.

“We serially re-read, which is like re-watching The West Wing,” he says.

“It remains my favourite TV series of all time. You can keep going back to it as one can go back to Shakespeare and find lines that you’d forgotten about or didn’t hear first time around.”

He and Ferguson also enjoy Scandi noir series on rival broadcaster SBS, and hit shows including The Wire, Battlestar Galactica, The Sopranos and Peaky Blinders.

Living in China will give Jones the chance to see history take shape up close, as it muscles up against the US over trade and power.

“Our biggest ally and our biggest trading partner at daggers drawn,” he says.

“You don’t know what’s going to happen, of course, in the American election, but if I were to put a bet on it now, I’d say Trump’s favourite.”

In Darkness Visible by Tony Jones is in bookstores now, published by Allen & Unwin