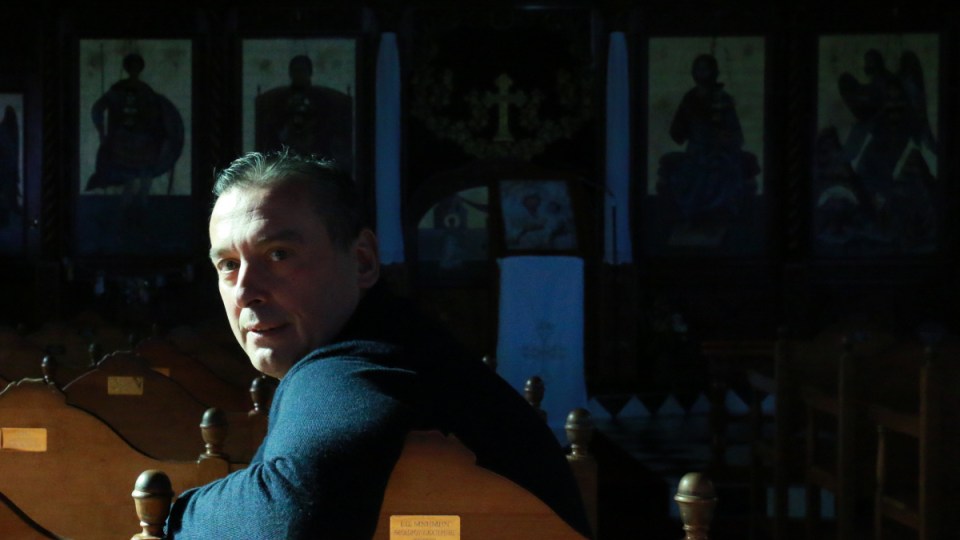 Christos Tsiolkas reveals the story behind the stories inside his latest novel. Photo: Zoe Abi

Christos Tsiolkas, the Greek-Australian author of international bestseller The Slap, was sitting in his mother’s kitchen in 2012, not long after the death of his father, when the conversation turned to the enormous pain they felt when he came out as gay.

A Greek immigrant, she had no real support system.

Talk of sex and sexuality were shunned in the community.

So it was profoundly comforting for Tsiolkas, who says he “doesn’t believe in gods, but is a free thinker”, to discover they both turned to the same unlikely source for comfort: St Paul’s letters to the Corinthians in the Bible.

Rather than fixating on a line or two, his mother saw the bigger picture, that we should love one another, and not judge.

“I was involved in an evangelical faith for a year and a half,” Tsiolkas recalls of his late teens as we sit down together on an unusually scorching Autumn afternoon at Thornbury’s Carwyn Cellars, not far from the Preston home he shares with long-term partner Wayne van der Stelt.

“I remember reading Paul and I couldn’t get beyond the lines about the prohibition of homosexuality,” he recalled.

“The end of that struggle was the beginning of my coming out and the real rejection of faith. I put my energy into socialism instead.”

But he turned back to Paul in a moment of doubt in his late 20s.

“For the first time, I heard his voice. I mean, I really heard the beauty of his words and the struggle. There is so much about love, hope and faith, and so little that is about morality. So why do we concentrate on one sentence?”

The conversation with his mum sowed the seed of his latest epic novel, Damascus.

Set in the years after the crucifixion of Christ, it details the tumultuous birth of Christianity in the shadow of the Roman Empire.

A time of brutal persecution, it was also one of brotherhood.

Much like The Slap, we hear from different narrators, including Paul. Initially persecuting the new sect, he converted to Christianity supposedly on hearing the word of Jesus from Heaven.

There’s also ambiguity about Paul’s fascination with his young companion Timothy, compassionately exploring doubt in a way that feels organic, not blasphemous.

“I don’t think I’ve made him gay, but the homoeroticism is …”

“Off the charts,” I finish his sentence with a grin.

There’s something of Ari’s struggle in Tsiolkas’s debut novel Loaded that mirrors Paul’s journey in Damascus.

The huge success of The Slap, its ABC adaptation and, less so an American remake, has given him the financial security to delve deep.

“I don’t take that lightly,” he says.

It was 14 months in before he put down a single word, and seven redrafts over five years.

The Slap also assuaged his parents’ fears for his future.

“I am no longer working class because of the success that came with that, but they are my roots, and my mother still lives in that world,” he says, noting that she cleans for a living.

“When The Slap happened, my dad was just so relieved because he knew he didn’t have to worry about Christos.”

Van der Stelt, a cartographer, reads all of Tsiolkas’s drafts, and he also drew up the map at the start of Damascus.

“I’ve been with Wayne for 35 years next year and the man is amazing,” Tsiolkas beams.

“It’s really special his work is a part of this book. That gives it a certain joy.”

Their enduring relationship has also comforted his mother, and helped Tsiolkas process past scars.

“I’m really lucky because I’ve got Wayne, and a certain philosophy, but shame and anger are two phenomenon that have shaped my life and informed my struggle. I don’t think it ever fully goes away.”

From where I sit, listening to the way he takes heart from words that could hurt and reading how he navigates these eddies on the page, I leave feeling confident his road to Damascus has been successful.

All he needs now is a Greek translation for his mum, who does not read English.

“For me, it would be the greatest gift I could give to her, so I’m writing to my agent about it,” he smiles.

Damascus, published by Allen & Unwin, is in bookshops now