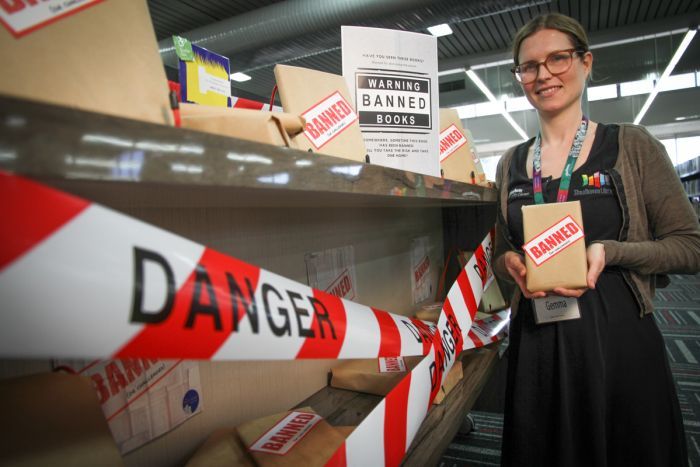 Australia has an extensive list of previously banned books that were once considered a threat to the country’s morals and literary standards — and there is a good chance that you have read at least one of them.

Literary researchers agree that during the 20th century Australia was considered one of the harshest censors in the Western world.

Books seen to arouse curiosity about sexual pleasure were deemed obscene under Australian censorship legislation and removed by Australian Customs.

D.H Lawrence’s Lady Chatterley’s Lover (1928), Jackie Collins’s The Stud (1969) and Bret Ellis’s American Psycho (1991) are among some of the books once-banned in Australia — and there are hundreds more.

These days the practice of censoring material seems antiquated so are we still banning books, and if so, how?

An Australian literature researcher at the University of New South Wales, Nicole Moore, has written about the nature of censorship in Australia’s past.

Professor Moore said Australian Customs censored readers as a form of self-protection and aimed to uphold moral standards to protect the citizens from obscenity, blasphemy and sedition — three pieces of legislation concerned with banning publications that threaten the national order.

As an example of how times change, and society’s morals move with it, Bret Easton Ellis’s American Psycho which was released in 1991 follows the life of a wealthy investment banker with graphically violent urges.

The psychological horror story was described at the time by novelist Andrew Motion as “deeply and extremely disgusting”.

The book was categorised under Australian censorship legislation as blasphemous, indecent and obscene, and given an R18 classification. To this day the novel is required to be sold in a sealed wrapper.

The film adaptation however is readily available for children to watch depending on family internet restrictions.

Professor Moore said the power of Australian Customs was diminished by the establishment of the Book Censorship Board in 1933 but prohibition was strictly enforced, and people caught with prohibited items could be prosecuted as criminals.

“Beyond import restrictions, domestic censorship operated through police action, vice squads, postal regulation, and civil and criminal prosecution under the proliferating censorship and obscenity acts, which differed across state borders,” she said.

“It was routine to have your suitcase searched on the way into Australia from another country.

“And scandals about book banning were routine in the newspapers.”

Reasons for censorship throughout history:

Are we still banning books?

These days, Professor Moore explained, the regulatory regime was struggling to keep up with the contemporary environment.

“There is still a mandate for restriction and control over certain kinds of materials coming into the Australian reading public, but it remains very difficult to regulate the internet,” she said.

Books and digital content, which would have once been censored, are much harder to monitor today.

“Contemporary society is enabling all kinds of material to be brought to the surface that wouldn’t have been before,” Professor Moore said.

“The idea of there being a nation state that can draw a border around itself to say, ‘we are like this, our reading public is like this, and different to this other reading public’, that is just a notion that has gone with the wind.”

Professor Moore said legislation still allowed certain books to be banned in Australia, and it did still occur.

“Under our contemporary legislation, which is administered by the Film and Literature Classification Board, the Board still has control over all publications which includes books,” she said.

“They can still be counted as offensive if they transgress the definitions of what remains offensive, such as sexualised violence.

“We still have a number of books on the banned list, some of which are quite significant, like books on euthanasia or books around jihadist terrorist instruction.”

The Shoalhaven Library on the NSW south coast has created a book display wrapping 40 previously banned books in brown paper.

The idea sprang from the libraries latest book club theme requiring participants to choose a banned book from the library’s resources, read it, and expand upon it during the clubs meetings.

Each of the books on display were chosen because at some stage it was deemed too debase or degenerate for society’s morals, and thus banned.

Curious borrowers do not know what lies beneath the paper covering and the library’s acting customer and community resource manager, Gemma Luxford, said the technique was having an impact on local borrowers.

“Essentially the idea is to encourage people to read books that at some time, and in some place anywhere in the world, have been banned or challenged,” she said.

“Somewhere in here there’s Frankenstein, Brave New World, The Dubliners, Lolita, and Batman, which was banned in the United Kingdom at some stage.”

The device or ploy encouraging readers to check-out a banned book is working as punters, young and old, have been taking home concealed books.

“We’ve had lots of interest. Over the past two weeks, whilst I’ve been on the desk, I’ve probably had about six people actually brave enough to borrow a book,” Ms Luxford said.

“Out of those, three were teenagers and they all seemed quite excited.

“None of them opened it while they were in the library.”

Brown paper wrapping can no longer conceal dubious literature, and with content easily accessible online it has made regulating it increasingly difficult.

Professor Moore said if displaying previously censored material helped to promote readership she believed this was a good thing.

“It’s very important that we have regulatory regimes that are transparent, and that people do know why things are banned so they can make their own minds up about whether they are legitimate.”