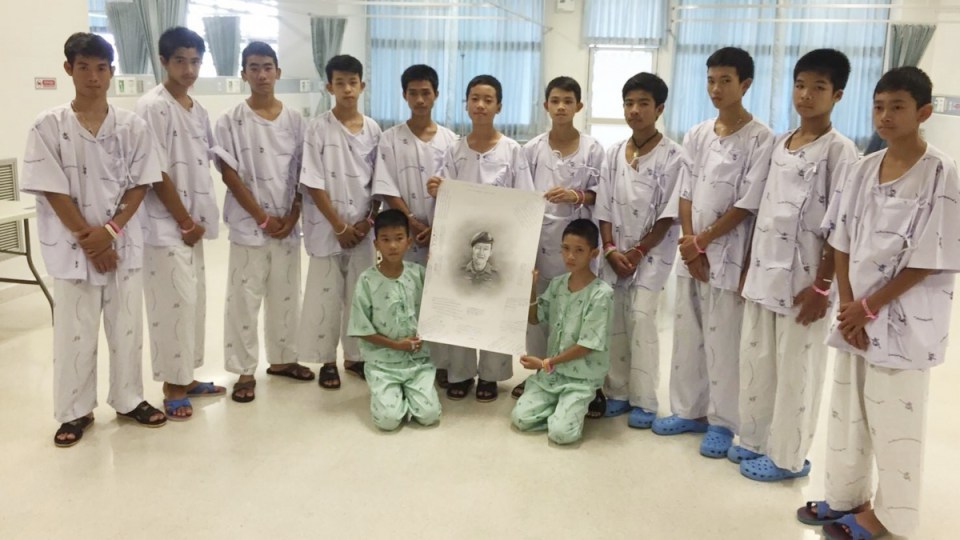 The Wild Boars pose with a sketch of the Thai Navy SEAL diver who died during their rescue. Photo: AAP

All along, the rescue teams – the Brits and the Americans, the Euro divers, the Thais and the Australians – had expected there to be casualties.

But to achieve so much, and then lose someone on the final day, was unthinkable. For all the meticulous planning on the third and final day of the rescue, Tham Luang cave still had the capacity to throw up unexpected difficulties that nearly resulted in catastrophic consequences.

By day three visibility in some underwater sections of the cave had become abysmal; the mud in other sections had somehow become thicker as the cave floor had dried out. Guidelines and empty cylinders littered the cave, creating more obstacles.

Mallinson (Jason Mallinson, of the British rescue team) would later reveal in an interview with a television reporter that the final dive out was an agony. The face mask intended for young Mark was simply too big for the skinny young Boar and, without a tight seal, he would drown on the way out. Mark had already been sedated with ketamine, so time was running out.

Another mask, with a different type of seal, was quickly found and pressed onto Mark’s face. The strap worked differently, which meant the mask could be dislodged sideways: Mallinson feared that any ill-judged bump could knock it off, and cause Mark to drown. But it was now or never. He pulled the child close to him and began the dive from chamber nine to chamber eight.

The rescue didn’t work out precisely as planned for Jewell, either. Close to the end of his dive out, (British diver Chris) Jewell lost his grip on the guideline between chamber four and chamber three. In the pitch black of the cave, it was a terrifying moment for the Brit – a brush with death.

Keeping one hand on the vulnerable, sedated Boar, Jewell began to search around in the dark for the line that would lead him and his charge to safety.

“I knew the dive line couldn’t be far away but I couldn’t find it. I deliberately tried to slow my breathing down, tried to stay exactly where I was, stayed stationary, deploying a strategy of looking for the line and then ultimately finding an electrical cable,” he later revealed in a television interview.

The sense of relief that flooded over him when he found the cable was momentarily overwhelming. But Jewell still needed to get back to safety and take stock of the situation. He was also worried about his boy: hypothermia was a risk after an extended period in the water, despite the wetsuit the boy was wearing. Disoriented, he found his way back to the sand in chamber four, where he wrapped his Boar in a space blanket and waited for a colleague who could provide a second pair of hands to come by.

In chamber three, the tension and excitement was building. One, two, three, four … five. The British divers, leaders and heroes all of the rescue, could scarcely believe it. Relief washed over the men. They were all out.

Now the more than 150 people stationed between chamber three and the cave exit swung into action. There was a momentary release of exultation that the boys were out, but there was still plenty of work to do.

The kids’ breathing still had to be checked: okay.

Doctors rushed over. More checks were made. The plan had always been to keep the boys completely ‘under’, at least as far as chamber three. But on the third day, at least one of the boys was filmed awake and talking by the time he reached the cave entrance.

“Once [each boy] was handed over to us, we were down at his face mask just listening for that breath,” said Senior Constable Matthew Fitzgerald, remembering the overwhelming relief he felt as each of the boys was found to be still breathing.

Kiwi diver Ross Schnauer, an expat who had lived in Thailand for about 15 years, was another member of the international contingent who volunteered to help.

On that final day, Schnauer spent about seven hours in the cave helping carry the boys out in difficult conditions.

Working in a team of four and relying on headlights to combat the darkness of the cave, they would receive about five minutes’ notice before a boy would arrive.

Coming through his section of the cave, Schnauer noticed that some of the boys had their eyes open while others were unconscious. But he was focused on the mission at hand.

“The part of the cave we were in was very rocky and unstable. You had to be very careful where you put your feet. To be honest, I did not notice anything about the boys, I was too worried about where to put my feet and make sure that I had a tight grip on the legs. You would not let them go at this time.”

The rescue team left the full-face masks on the boys for the rest of the journey out of the cave because the air quality in the cave had declined so severely. As Ek and the final group of boys exited the cave one by one, they were checked at the field hospital outside before they, too, were bundled into ambulances and ferried to the waiting helicopters, thence to Chiang Rai Hospital.

Back at the car park of the Pong Pha Sub District Administration Office, news that the final five had been successfully rescued leaked out. But this time it took only about 20 minutes. Around an hour later, Narongsak Osatanakorn confirmed the mission was under way – and that all five were on their way out.

“Today we might have to wait longer, but it will be worth the wait to get all five out,” he said. Cheers went up among the volunteers and, indeed, across the world.

Heavy rain had fallen earlier in the day, but once it ceased in the early afternoon, the temperature in Mae Sai soared.

But there were still four people to come out.

This is an edited extract from The Great Cave Rescue, by James Massola, Allen & Unwin, RRP $29.99

Book extract: The Great Cave Rescue: The incredible inside story of heroes and hope