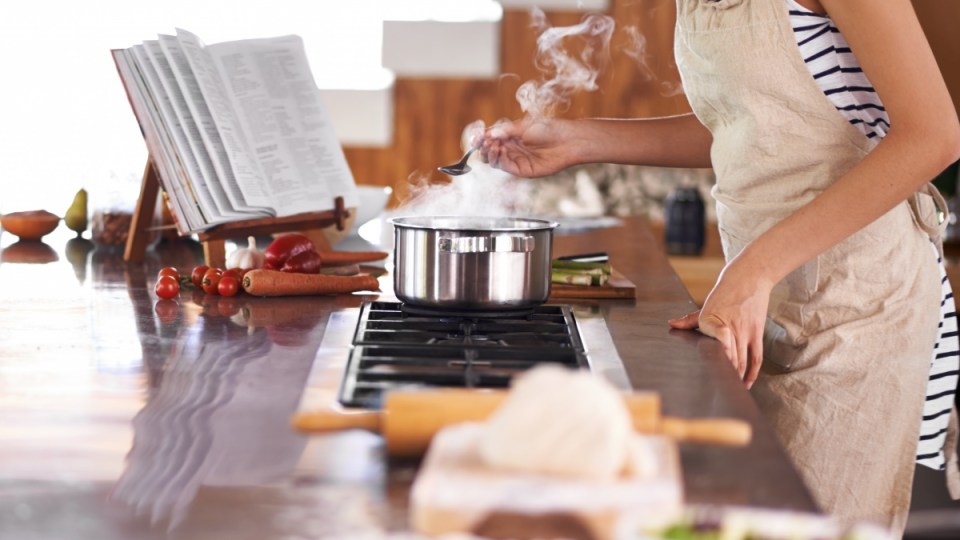 Even the most seasoned chef can do with a couple more cookbooks. Photo: Getty

Cookbook sales double during the festive season, according to Sophie Higgins, Dymocks’ Head of Merchandise and Marketing.

And it’s Victorians leading the way, accounting for 29 per cent of all cookbook sales across Dymocks’ 60 stores nationally. Perhaps Victoria’s next number plate slogan could be “The Gourmet State”.

New South Wales comes a close second, with 24 per cent of cookbook sales, and then it’s West Australia with 17 per cent.

Because we eat with our eyes, it’s probably no surprise that 95 per cent of cookbook sales are in store with only 5 per cent online. “And indeed many of us are searching for gourmet inspiration while we plan our own Christmas feasts,” Ms Higgins says.

There is plenty to choose from new books from celebrity chefs, including Nigella Lawson, Jamie Oliver and Matt Moran, leading the way.

An Omnipoll survey shows that around 10.4 million Australians are likely to give someone a book this Christmas.

But what’s the etiquette around giving to those with more cooking prowess than most? Are experienced chefs happy to receive another cook’s cookbook?

Dan Hunter, chef at Brae (ranked number one in Australia’s top 100 restaurants) and author of Brae: Recipes and Stories from the Restaurant, says absolutely.

“There’s always room on the shelf for another cookbook. There’s also much love felt when receiving a signed copy of one of your friends’ or peers’ books,” he says.

For everyone else who doesn’t have their own cookbook to give, TND asked Dymocks, Readings and Books for Cooks for their top cookbook recommendations.

Sophie Higgins, Head of Merchandise and Marketing at Dymocks

Corsica: The Recipes by Nicolas Stromboni

The Vegetable – Recipes that celebrate nature by Vicki Valsamis

The Great Australian Cookbook – recipes from 100 of our greatest chefs, cooks, bakers and local heroes.

Ostro: The Pleasure that Comes from Slowing Down and Cooking with Simple Ingredients by Julia Busuttil Nishimura

Maggie’s Recipes for Life by Maggie Beer and Ralph Martins

Mr and Mrs Wilkinson’s: How it is at Home by Matt Wilkinson and Sharlee Gibb

The Tivoli Road Baker by Michael and Pippa James

A Charcuterie Diary by Peter Booth

For kids, the standout is Basics to Brilliance for Kids by Donna Hay

And the pièce de résistance is the massive five-volume tome Modernist Bread by Nathan Myrvhold which itself weighs 25kg and costs quite a bit of, err, dough at $825.

The best cookbooks to buy as gifts this Christmas