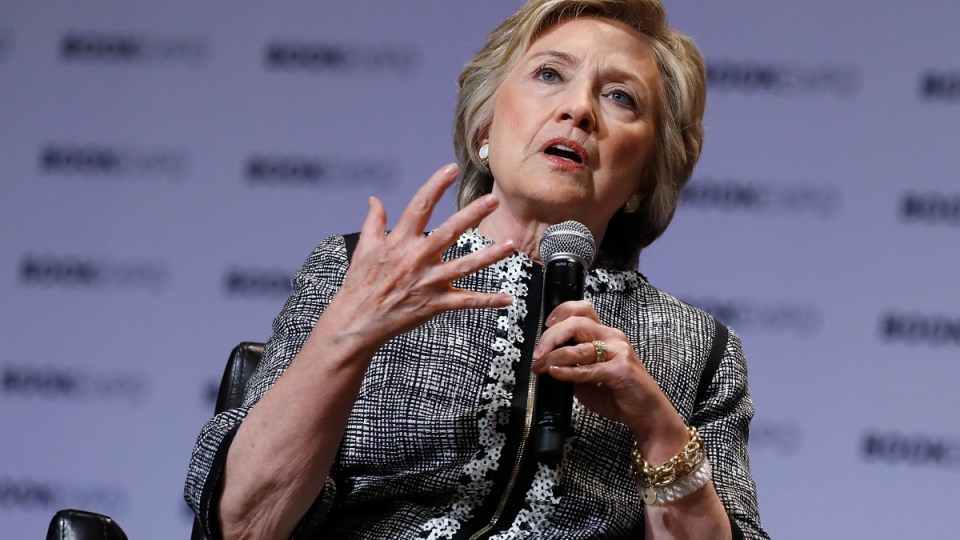 Hillary Clinton may point the finger at many, but she's more than aware of her own role in her election demise. Photo: Getty
analysis

Former presidential candidate Hillary Clinton has been accused of blaming everyone but herself for her shock loss to Donald Trump.

But her brutally honest new memoir, What Happened, clearly sees her own up to her mistakes.

Yes, Mrs Clinton highlights the challenges she faced, including sexism, the proliferation of fake news and accusations she ignored the working class.

She also tackles former FBI director James Comey’s precedent-smashing second intervention over her emails 11 days out from the election. This while he stayed quiet on the investigation into the Trump campaign’s alleged connections to interference by the Russian government.

But Mrs Clinton isn’t looking to make excuses; she’s striving to understand and, in doing so, aid future Democratic hopefuls.

“My worst fears about my limitations as a candidate had come true,” she writes.

“I tried to learn the lessons of 2008, and in many ways ran a better, smarter campaign this time.

“But I had been unable to connect with the deep anger so many Americans felt or shake the perception that I was the candidate of the status quo.”

There’s her personal mea culpa in black and white, and yet it’s still nowhere near enough for Mrs Clinton’s many detractors – including those who voted for her.

Like columnist Gersh Kuntzman who, in the immediate aftermath of the election, snapped in the New York Daily News: “Hey Hillary, shut the f––k up and go away already.”

Despite countless experts outlining the many and complex reasons behind her defeat, many insist the blame must lie solely with her and that she has no right to examine that failure publicly, something not denied to Democratic candidate John Kerry in 2004.

In the early hours of November 9 last year, Mrs Clinton could understand that sentiment.

“The speechwriters gingerly approached with a draft of a concession speech. I honestly wondered why anyone would want to hear from me ever again.”

Mrs Clinton notes: “It’s fair to say there was a fundamental mismatch between how I approach politics and what a lot of the country wanted to hear in 2016.

“I’ve learned that even the best plans and proposals can land on deaf ears when people are disillusioned by a broken political system and disgusted with politicians.

“When people are angry and looking for someone to blame, they don’t hear your 10-point plan to create jobs and raise wages. They want you to be angry too.”

Her personal approach didn’t land. As former Australian prime minister and Mrs Clinton supporter Julia Gillard once said of the sexism she faced in the top job: “It doesn’t explain everything, it doesn’t explain nothing, it explains some things.”

Retreating with friends to Eleanor Roosevelt’s cottage in New York’s Hyde Park in the crushing days following the election, Mrs Clinton wryly draws comparisons between herself and the former First Lady.

While the FBI didn’t investigate Mrs Roosevelt, they had a huge file compiled on her.

“People criticised her voice and appearance, the money she made speaking and writing, and her advocacy for women’s rights, civil rights, and human rights,” Mrs Clinton writes.

“An overzealous director of the FBI put together a 3000-page file on her. One vituperative, national columnist called her ‘impudent, presumptuous, and conspiratorial’, and said that ‘her withdrawal from public life at this time would be a fine public service’. Sound familiar?”

What Happened is out now, published by Simon & Schuster.

The critics are wrong again, Hillary Clinton takes her share of blame in new book