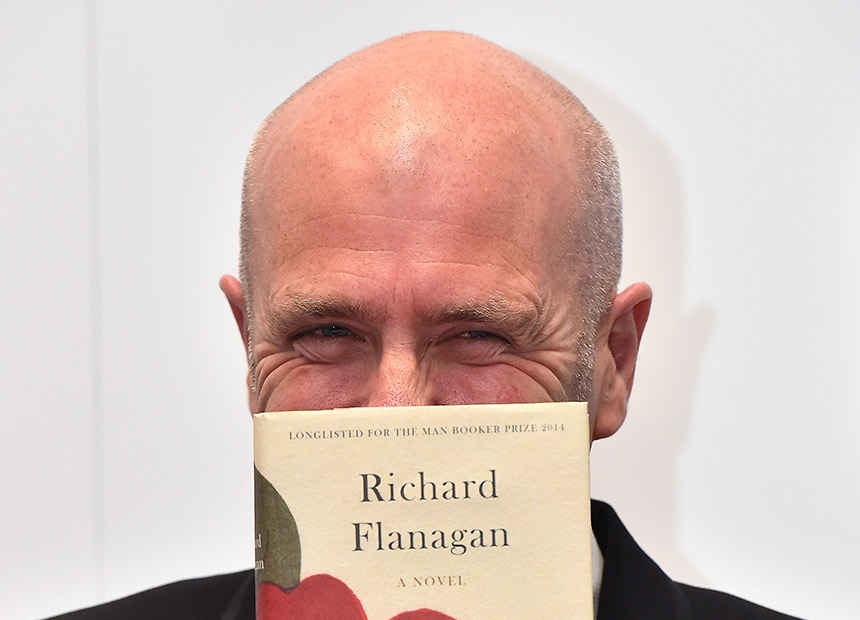 It’s a pretty special year when an Aussie author brings the Man Booker prize home, but Richard Flanagan’s latest is just a sample of the strength of the literary scene in 2014.

The Narrow Road To The Deep North

Based loosely on the experiences of his father, prisoner 335 on the Japanese forces Death Railway build during WWII, Flanagan’s Man Booker winner is a deeply personal story given majestic life in this beautifully crafted and heart-achingly powerful novel. With echoes of Tennyson’s Ulysses, the journey of Dorrigo Evans and his lost love that keeps his light going is an epic voyage that every Australian should be proud of.

Purchase The Narrow Road To The Deep North here

The Assassination of Margaret Thatcher

It’s been a strong year for short stories, with mighty pen often at its most powerful when charged with economy. Australia delivered Michelle De Krester’s Springtime: A Ghost Story and Christos Tsiolkas’ Merciless Gods, both fantastic, but we relished this powerfully unsettling collection from twice-Man Booker queen Mantel. From creepy mansions, to complicit murder and the imminent hand of death, something dark here lies. The final yarn of the intriguing title is a thrilling page-turner, even if it’s not quite what you might think.

Acute Misfortune: The Life And Death of Adam Cullen

As if being the country’s youngest editor of a national newspaper isn’t achievement enough, The Saturday Paper’s Erik Jensen also managed to deliver one of the year’s finest endeavours. Jensen was only 19 when he agreed to move in with mercurial artist Adam Cullen, on the promise of a publishing contract to write the highly erratic drug and alcohol-abusing artist’s biography. The contract didn’t exist, but Jensen was nonetheless strangely bound to Cullen, despite being both shot by him and pushed off his motorbike. There’s a raw and volatile beauty to this part-harrowing, part-inspiring tragedy.

The Days of Anna Madrigal

Bohemian earth mother and logical family proponent Anna Madrigal first appeared as the landlady of iconic fictional San Francisco address 28 Barbary Lane way back in 1976, before I was even born, but this larger-than-life character captivated me when I first stumbled upon Armistead Maupin in the 1990s. The transgender hero immortalised by Olympia Dukakis on the TV adaptation takes her final bow in this, the last tale of the city, as the rest of the cast head deep into the Nevada Desert and the Burning Man festival. It’s a challenge to have a dry eye when all’s said and done.

This House of Grief

A powerful exploration of a fraught case involving a father accused of deliberately killing his three sons when he drove his car off the road and into a dam on Father’s Day, Helen Garner riveting non-fiction gem is a darkly intriguing work. Garner followed the seven-week trial and recreates it vividly for the reader, exploring the fine line between love and hate, all the while toying with our understanding of innocence and guilt. What really happened that terrible day? You’ll be feverishly turning the pages of This House of Grief to find out.

Purchase This House of Grief here

Don’t be put off by the apparent fashion focus and pastel pink cover, Vashti’s Dress, Memory is a compelling account of a young woman finding her way in the world, and haven’t we all associated objects with particular moments in our lives, both bad and good? A refreshingly honest and vital voice, this was a riveting read that radiates warmth. If you’ve ever found yourself questioning how we measure our own success, there’s a great wedge of wisdom within these well-dressed pages.

If you can’t get enough of Mr Fry, whether it’s a daily double dose of QI, his dramatic leaning on the big and silver screens or his encyclopaedic knowledge of the English language then you’re bound to love this third instalment of his memoirs. Handily, if you’re lagging behind, he even sums up the previous two, Moab is my Washpot and The Fry Chronicles. This deals with his rise to fame and the cocaine addiction that came with it, and sports cameos by Prince Charles and Di, Frank Sinatra and even a 1990s flashback to the Blur/Oasis rivalry. But really, it’s the man himself who’s the most fascinating.

One of the year’s most intriguing mysteries, Silence Once Began, by US author and poet Jesse Ball, blends fiction with seeming fact, beguiling the reader with an en masse disappearance in a tiny Japanese community. Ball poses as a journalist reporting on this strange case, but is there even a crime at play here, or is the supposed killer honour-bound to his fate? Beautifully presented, this musing on love and loss is utterly captivating.

Sharing a similarly sprawling, decade-spanning format with his famous 2004 novel, Cloud Atlas, Mitchell’s latest offering pins the epic framework to a more intimate hook in its central figure, Holly Sykes. This is her story, with each of the book’s six parts divided into certain periods of her life, as the world slowly collapses around her, quite literally. And then warring factions of strange, immortal beings show up just to complicate matters. Deftly handling an unwieldy plot and sewing rich characters into the tapestry, there’s no one quite like Mitchell for creating such fantastical and yet utterly relatable worlds.

Francis Plug: How To Be A Public Author

Without doubt the most hilarious offering of the year, Paul Ewen’s outrageously sharp-witted How To Be A Public Author is a very clever work indeed. The New Zealand author, now based in London, has clearly spent a lot of time of the book tour scene, a habit he shares with his fantastic literary creation, Francis Plug, This alcoholic reprobate, a wannabe author himself and a terrible gardener, essentially gets tanked on the free booze available at these events then harasses various world-renowned authors, including Hilary Mantel, Salman Rushdie and Ruth Rendell. It’s a hoot.

Purchase Francis Plug: How To Be A Public Author here