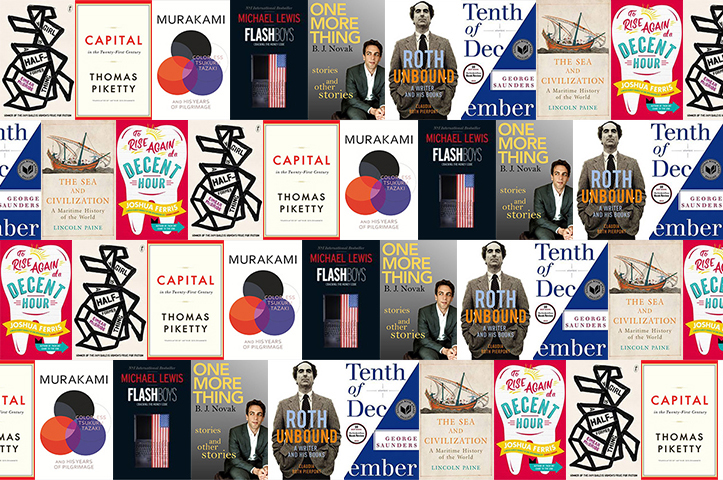 Big ticket authors demand our attention, purely because they have sleek marketing machines behind them that make it almost impossible to miss the hit titles.

But what of the quiet-achieving novels and the hard hitting non-fiction tomes that hit the shelves each year and are bona fide classics?

In the past year, the following books have made significant impacts in the literary world and all are best sellers. Read on and find your own favourite.

Author: Michael Lewis
Other titles: Moneyball, The Big Short, Liar’s Poker and The Blind Side

Wall Street’s foremost chronicler, Michael Lewis, tackles the looming crisis of high speed trading – where banks and financial institutions use fibre optic cables and new technologies to gain microsecond advantages in receiving information from the share market at the expense of ordinary investors. Lewis tells the rollicking story of an unlikely trader at the Royal Bank of Canada who discovered the phenomena, then teamed up with an Irish fibre optics expert to counter the disadvantage and develop a new stock exchange that would allow ordinary investors to access data at the same frequency as high-speed traders.

Why you should read it: The New York Times says of Lewis: “When it comes to narrative skill, a reporter’s curiosity and an uncanny instinct for the pulse of the zeitgeist, Lewis is a triple threat, as he’s demonstrated in best-­selling books like “The Big Short” and “Moneyball.”

A Girl is a Half Formed Thing
Author: Eimear McBride
Other titles: debut novel

Irish author Eimear McBride wrote her debut novel in six months aged 27 before struggling for nine years to find a publisher. The book became a sensation upon its release in late 2013 and McBride was hailed a genius with the novel winning a slew of literary awards in her native Ireland. Written in the stream of consciousness style popularised by James Joyce a century ago, the novel is told from the internal perspective of ‘Girl’, who lives through her family’s misfortune in rural Ireland before moving through her troublesome teens and promiscuous early adulthood. A Girl is A Half Formed Thing announces the arrival of an ecstatic new talent.

Why you should read it: The Guardian says of McBride’s prose: “The adventurous reader will find that they have a real book on their hands, a live one, a book that is not like any other.”

Buy A Girl is a Half Formed Thing here

Colourless Tsukuru Tazaki and his Years of Pilgrimage
Author: Haruki Murakami
Other titles: The Wind-Up Bird Chronicle, Norwegian Wood, Kafka on the Shore

Cult Japanese writer Murakami’s first novel since IQ84 follows the past and present of Tsukuru Tazaki, who in his second year of college had all of his friends abruptly cut off all relations with him, leaving him feeling destined to be alone. Now, 16 years later, his girlfriend challenges him to come face to face with his own past, mend his relationships and find out why they rejected him. And so he will visit them one by one, taking a pilgrimage from Nagoya to rural Finland in search of answers.

Why you should read it: The Wall Street Journal says of Murakami: “Haruki Murakami is the closest thing we have to a global literary rock star who is also mentioned in the same breath as the Nobel Prize.”

Buy Colourless Tsukuru Tazaki and his Years of Pilgrimage here

French economist Picketty spent a decade accumulating data for his seminal work on the nature of capital and inequality in the 21st century. Crudely simplified, Picketty finds disturbing trends in the weight of data to suggest the growing disparity in Western economies between the 1% and the rest of society puts us in danger of returning to 19th century levels of social inequality. Picketty concludes that without sincere government regulation, Western civilisation is likely to return to a system of patrimonial capitalism. The first economics study to become an international sensation in decades.

Why you should read it: Upon the release of Picketty’s debut book, Nobel Prize Winning Economist Paul Krugman declared: “This is a book that will change the way we think about society and the way we do economics”.

To Rise Again at A Decent Hour
Author: Joshua Ferris
Other titles: Then We Came to the End, The Unnamed

Already on the short list for the 2014 Man Booker Prize, Joshua Ferris’ third novel is about Paul O’Rourke, a dentist whose life is a bundle of contradictions; a technophobe who loves his iPhone, an Atheist who can’t let go of God. One day, someone begins to impersonate Paul online – a Facebook page, website and a twitter account are all created in his name. At first shocked at the outrageous invasion of his privacy, Paul begins to worry that the virtual online Paul might be better than the real thing. As the mystery surrounding his identity theft deepens, Paul is forced to confront his own tormented past and to navigate a strange new world divided between the real and the virtual.

Why you should read it: Author Lauren Groff says of Ferris’ third novel: What gives “To Rise Again at a Decent Hour” a fighting chance against the forces of tedium is that it’s a Joshua Ferris book, and the author has proved his astonishing ability to spin gold from ordinary air.

Buy To Rise Again at A Decent Hour here

One More Thing: Stories and Other Stories
Author: BJ Novak
Other titles: debut

BJ Novak, who for nine years served as writer/director/actor on The Office, comes off the long running show (and the film Inglorious Basterds) to release this impressive and genuinely funny book of 63 short narratives. In the comedic tradition of Woody Allen, Novak is endlessly whimsical and inventive with his stories (The Comedy Roast of Nelson Mandela for one) and justifies the hype surrounding his collection and emerges as an exciting literary talent.

Why you should read it: Jen Chaney for the Washington Post says: “All I can say is good luck chuckling quietly during One More Thing, the wonderfully cockeyed, consistently hilarious debut from B.J. Novak.”

Buy One More Thing: Stories and Other Stories here

Why you should read it: NPR Books says: “Roth Unbound brings heightened understanding to the extraordinary scope and risk-taking brilliance of Roth’s work, and makes a compelling case for its enduring importance. In fact, not since I first read Portnoy’s Complaint have I been so struck by a writer’s willingness to – dare I say it? – expose himself to so much outraged criticism.”

A series of short stories published between 1995-2009 by American author George Saunders who specialises in zany, riotously imaginative stories that zero in on the everyday life of ordinary people: Escape from Spiderhead focuses on an ex-con testing pharmaceuticals controlling guinea pigs’ ability to love. In Sticks, a widower loses his sanity and takes to decorating a pole in bizarre ways. But Saunders’ wild imagination is matched by his compassion and generosity of spirit. Tenth of December reaffirms Saunders place as a singular voice on the international literary scene.

Why you should read it: Sydney Review of Books says: “Saunders’ biggest, widest target is capitalism and at his best he makes you notice, as though you had only just noticed, how money and the art of selling things (and the helpless way we go on buying things) have come to govern everything we do.”

The Sea and Civilization: A Maritime History of The World
Author: Lincoln Paine
Other titles: Down East

Lincoln Paine provides an epic and sweeping history of mankind’s relationship to the ocean. His narrative traces how people first came into contact with one another via ocean and river, the ancient seafaring civilizations of Europe and Asia, through to recent developments in commercial shipping in the post Cold War era. Paine creates a rollicking journey across this historical canvass whilst maintaining a keen eye for details.

Why you should read it: The Telegraph says: “The majority of us are terrestrial creatures rather than amphibian when it comes to our conception of history. Lincoln Paine offers a corrective to this, in a magnificently sweeping world history that takes us from the people of Oceania and concludes with the container.”

Buy The Sea and Civilisation: A Maritime History of The World here