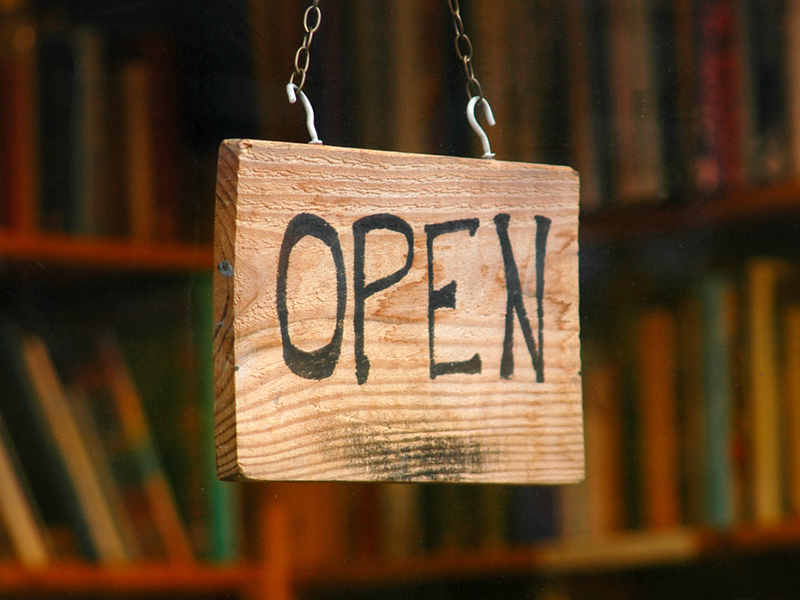 It was a prediction that had some book-lovers in Australia worried.

In 2011, Small Business Minister Nick Sherry made the claim that book stores would no longer exist in Australia by 2016.

“I think in five years, other than a few specialty book shops in capital cities, you will not see a book store. They will cease to exist,” Mr Sherry said.

• August reads: get stuck between the covers
• Is this the worst children’s book ever?
• Bob Brown on passion, politics and prison

His statement echoed the growing concern around the health of the bricks and mortar store, following the collapse of RedGroup, which included megastore Borders and Angus & Robertson.

The growth of online sales, particularly the ability to source books at a discount price from overseas websites, also had people on edge.

It’s all part of the charm. People walk through the door and take a big in breath in because they love the smell of old books. In response, the Australian Booksellers Association, the industry’s national not-for-profit peak body, created National Bookshop Day which was celebrated in bookshops around Australia over the weekend.

“We originally created the day, which celebrates the role of the bookshop as a key cultural and social centre in the community, as a response to ill-informed comments by uninformed commentators, like the former Minister for Small Business, Nick Sherry,” the association’s CEO Joel Becker said.

“We felt that rather than responding with dry statistics, we should celebrate what a bookshop brings to the community, and to thank our tens of thousands of customers and friends by having a national party.”

According to Mr Becker there are more than 900 dedicated bookshops in Australia, excluding businesses like newsagents and department stores, bringing in $1.1 billion a year.

And despite the doom and gloom surrounding the industry, many retailers believe the death of the bookshop has been widely exaggerated.

Digging for a good read

People entering Mark Harrison’s shop in Coober Pedy often get a shock when they walk through the door.

“Visitors think its amazing, particularly those from overseas. They’re initially surprised because they think they’re coming into something like a coal mine which is dark and dank, but it’s remarkably airy,” Mr Harrison said.

Underground Books is precisely that – a bookstore built underground – like many places in the small South Australian mining town.

It has all but got the marketplace to itself, being the only bookstore in the 1,500 kilometres between Adelaide and Alice Springs.

“They’ve actually tunnelled into the sandstone like you do with a mine, using a tunnelling machine to open it up. It was done in 1985.”

It may sound like a bit of a gimmick, but it keeps the books in great shape.

“The store keeps a constant temperature the whole year round, about 24-26 degrees,” Mr Harrison said.

The constant temperature in the underground shop keeps the books in good condition.

“We don’t need any heating or cooling, so you find the books are in really good condition because we’re not relying on humidity.

“It could be 45 outside in summer and you walk inside and it’s beautiful.”

Mr Harrison is not worried too much about the health of his store, because it has a unique focus.

“We get mainly tourists coming into the store, quite a few Australian tourists, because a lot of the books I sell aren’t available in the capital cities,” he said.

“We sell a lot of books on indigenous culture and history and the early central Australian explorers.

“Online sales are less of a problem because of the type of the books that I sell, particularly ones with photographs.

“I’d guess about 95 per cent of my books are not available online.” You can wander up to the stand outside Alice’s Bookshop in leafy Carlton North, in Melbourne’s inner suburbs, and pick up a well-thumbed paperback for a few gold coins.

The second-hand bookshop was taken over by British couple Joshua and Ellen Boyd-Green two years ago after Ms Boyd-Green discovered the family favourite was for sale.

Joshua Boyd-Green moved to Australia with his wife Ellen to buy her gran’s favourite bookshop.

“The shop was her gran’s favourite bookstore,” Mr Boyd-Green said.

“We were booksellers in the UK and my wife, who is half-British, half-Australian, was visiting her family for Christmas.

“Ellen went into the shop and saw it was for sale. She spoke to the previous owner, phoned me that evening and everything sort of fit together after that.

“We came up with various reasons why we shouldn’t buy this bookshop I’d never seen, 12,000 miles from where were living, but every time we thought of a problem it just dissolved.”

There’s a certainly been a lot of doom-mongering around bookshops, but it’s not something that’s dying out.

Mr Boyd-Green said there was no space spared in the shop.

“It feels like an old-fashioned second-hand book shop. It’s quite British and has a very slow and gentle feeling about it,” he said.

“It’s all part of the charm. People walk through the door and take a big in breath in because they love the smell of old books.

“We enjoy the combination of the two. The fact a six year old will come in and be pretty pleased with what they get, and then a very serious collector will come in looking for something rare.” He believed there is still a market for the book, because there are different levels of reader.

“As it ages the book becomes an object in its own right.

“They become stories within themselves.”

And he is not too worried about keeping the doors to Alice’s Bookshop open.

“There’s a certainly been a lot of doom-mongering around bookshops, but it’s not something that’s dying out,” he said.

“Second-hand books have that retro charm that some people like, and if you have the right books – good books – then people will want them.

Buying books in the big city

The Dymocks franchise on Melbourne’s bustling Collins Street is one of the last remaining “big” book sellers in the Central Business District.

Dymocks franchise co-owner Dino Traverso believes there is a positive future for bookshops.

“We’re definitely the biggest in (Melbourne) by a long way,” its co-owner Dino Traverso said.

Mr Traverso followed his brother Ivan into the business after 15 years in the corporate world.

“For both of us it was a change of lifestyle. It’s more about enjoying what we sell, and we all love to read.

“My brother was an academic just trying to find something to do and work at. I got involved initially just to help him out and enjoyed it so much I decided to join in.

Mr Traverso said while the future of the book store isn’t guaranteed, the concern around their demise was misguided.

“There was a lot of doom and gloom about e-books. Whilst there still there they’re just another format you can buy a book in.

“But you can’t change the feel of the book. People like the paper of the book, and they like to browse in a book shop.

“I think people also got worried that shops might disappear, so they decided to to go back and support them.”

He said the collapse of RedGroup fundamentally changed the market, and put a lot of booksellers out of work.

“Borders came into the market and shook it up, which was good and bad. They really made it hard for the smaller sellers, and put a lot of pressure on other stores, including us,” he said.

“And I think we ended up with too many bookshops.

“Not too many would have been sad to see Borders go, but it wasn’t good to see Angus & Robertson disappear with that.”

Teens getting back into books

Mr Traverso said one of the things behind the resurgence was the quality and popularity of youth literature. “A lot more teens are getting back into reading through Harry potter and paranormal and things like that.

“Some don’t like the content and the way it’s written, but it’s introduced a hell of a lot of children to reading.

He said he was confident about the store’s future, but online sales were still a major concern.

“It’s just not a level playing field. You’ve got online books not paying GST and cheap freight charges. We need to charge $10 through Australia Post to send a book, but you can get them for free from the UK.

“It’s not as much as a concern to us because we’re a big store, but it’s harder for the smaller stores to survive. That won’t change unless the issue is addressed by the Government.”

But Mr Traverso remains upbeat about the love Australians have for books.

“We want people to understand there’s a lot of positivity around book stores. That’s what National Bookshop Day is about.

“There’s been a lot of doom and gloom, but we want people to know that we’re still here and to come in and enjoy them. Support your local bookshop.”

Death of the book shop: the end, or a new chapter?