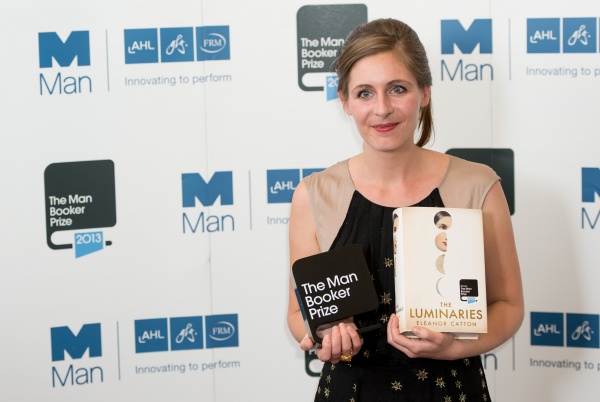 New Zealand author Eleanor Catton is being feted as a heavyweight storyteller after becoming the youngest winner of the prestigious Man Booker Prize.

The 28-year-old’s 832-page novel The Luminaries is the longest work to win the celebrated literary prize in its 45-year history.

The book is described as a “Kiwi Twin Peaks” – a gold rush murder-mystery set in the South Island town of Hokitika in 1866.

After accepting the STG50,000 ($A84,416) prize from the Duchess of Cornwall at a London ceremony on Wednesday, Catton said she hadn’t been conscious about the book’s length while writing it.

“It wasn’t until I received the proof of the book that I thought, ‘Jeepers, this is actually quite heavy’,” she said.

“I’ve had to buy a new handbag, because my old handbag wasn’t big enough to hold my book.”

Judging panel chairman Robert Macfarlane said The Luminaries was “luminous”, “addictive in its storytelling” and “vast without being sprawling”.

He said Catton’s youth did not influence the judges, and Catton said she felt “honoured and proud to be living in a world where the facts of somebody’s biography doesn’t get in the way of how people read their work”.

Nor did the size of the book deter the judges.

“Those of us who didn’t read it on e-readers enjoyed a full upper-body workout,” Macfarlane joked.

Catton said she was stunned to hear she had won the award: “It was just a white wall, I don’t really remember.”

Prime Minister John Key was among those to heap praise on Catton.

“This is a hugely significant achievement on the world stage for a New Zealander,” he said.

“This will be a tremendous boost for young New Zealanders in the arts and is a testament to the obvious talent and hard work of Eleanor Catton.”

The next youngest author to take out the prize was Ben Okri who was 32 when he won in 1991.

Catton was born in Canada but has lived in New Zealand since the age of six.

Keri Hulme is the only other New Zealander to win the prize, for her 1985 novel The Bone People which was also set on the West Coast.

British bookmakers had made Jim Crace and his novel Harvest the favourite to win the prize.

The other shortlisted authors were Colm Toibin (The Testament Of Mary), Jhumpa Lahiri (The Lowland), NoViolet Bulawayo (We Need New Names) and Ruth Ozeki (A Tale For The Time Being).