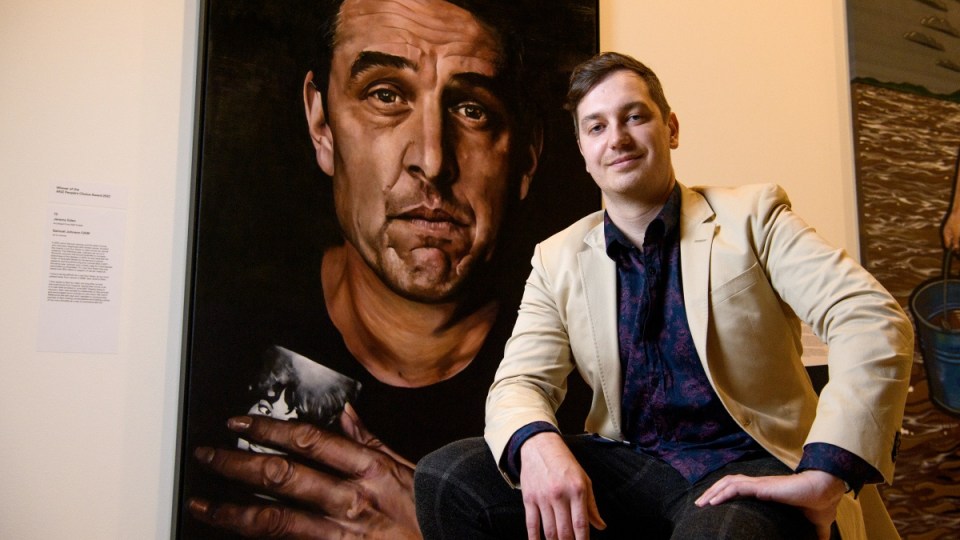 After receiving the award at the Art Gallery of NSW, Eden said he was ecstatic to win the popular vote in his second consecutive year as an Archibald finalist.

“It’s been life-changing … I just hope I can grow with it and be one of those people that’s here every year,” he said.

Being a finalist had alone meant more commissions, and he hoped Wednesday’s win would lead to gallery representation.

“I went from being an emerging artist with nothing to back me up, to people somewhat knowing who I am, which is lovely.”

The Sydney artist met Johnson in 2021 while the actor was recovering from a near-fatal car accident.

Johnson was in a neck brace when they first spoke on a video call, and the pair bonded over their shared experience of losing close family members to cancer.

Eden’s mother died from the illness in 2008, while Johnson founded the cancer charity Love Your Sister with his sibling Connie before she died in 2017.

The winning portrait depicts Johnson holding a photo of Eden’s mother Annette, after the actor encouraged Eden to include his personal story in the portrait too.

The painter flew to Melbourne for a live sitting with Johnson, then worked six hours a day for 10 weeks to finish the portrait.

“The people have spoken and they loved Jeremy the most,” Johnson said in a statement.

“He is an extraordinary storyteller, has a huge heart and he deserves this acknowledgement so fully.”

Love your Sister has a substantial public following and has raised more than $15 million for cancer research.

The Archibald, Wynne and Sulman prizes are on show at the Art Gallery of NSW until August 28. The Archibald finalists will tour regional Victoria and NSW until July 2023.