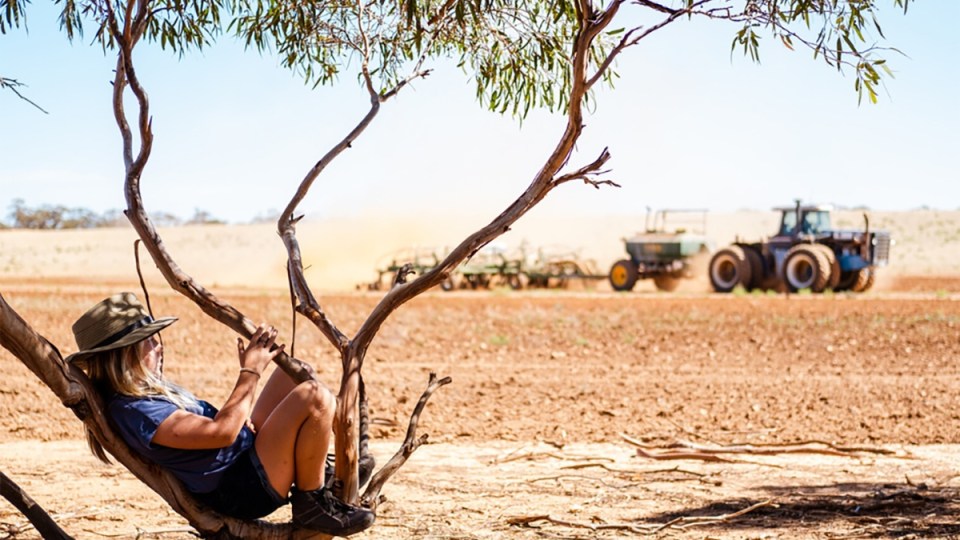 Poppy Thannhauser sits snugly in a tree, daydreaming while her father finishes work on the tractor.

The quiet magic of being a country kid was captured by her mother Aimee on a friend’s farm near Mildura, Victoria, at the beginning of autumn.

The image has been chosen as one of 12 winners of Rural Aid charity’s Spirit of the Bush photography awards, which aim to give Australians a glimpse of life on the land.

“A farm is a big playground. My kids learn so much that they won’t learn at school,” Ms Thannhauser told AAP.

“It’s great bonding time. Sometimes we all try to fit in the tractor to spend more time together. It’s freedom.”

Ms Thannhauser, an artist who runs a small business making children’s costumes, encourages her nine-year-old daughter and five-year-old son to run away with their imaginations.

“We always say: Let the kids get bored,” she said.

“They like finding animal tracks, or picking up a stick, which can become so many different things, or building little forts out of trees.”

Rain was on her mind as she took the photo, and she wondered if Poppy’s eyes were scanning the sky too.

“I know a lot of the country’s in flood, but we don’t have anywhere near as much rain.

“My husband is forever telling my kids to pray for rain.”

Carla Pidgeon, a fifth-generation farmer from Allora in Queensland’s Southern Downs region, is also used to being at the mercy of Mother Nature.

She and her husband were getting ready to harvest a barley crop last October, when a storm closed in around them. Ms Pidgeon grabbed her camera.

“He was madly trying to put everything into a shed and I’m telling him, ‘Just hold up I’ve got to take a photo of this storm coming’,” Ms Pidgeon laughed.

Her photograph of tendrils of lightning reaching down through a dark, swirling storm cloud was also named a winner.

“It encapsulates the drama of farming, but also the beauty,” she said.

“One of the things I love about farming is that nature always reminds you to stay simple.

“It’s so much more powerful than you, but when you can work together, it’s a beautiful outcome.”

His aerial photograph shows the perfect straight lines of a corn crop being harvested during a break in heavy rain in March.

“I’m a rural boy. I grew up on farms, operating tractors and machinery since I was knee high to a grasshopper.”

The other nine images will make up a 2023 calendar, and feature red dirt tracks, working dogs and a sunset over a rusted farm gate.

Alan Kohler: It’s the third wave of Omicron, but we’re not worried
Frankenstein: What Mary Shelley’s sci-fi classic teaches us about the dangers of playing God
Today's Stories