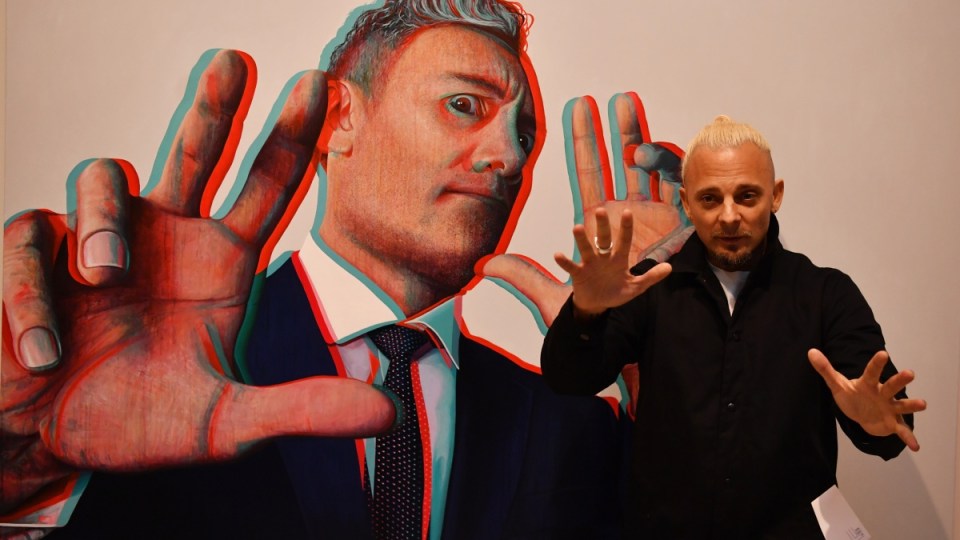 Claus Stangl with his portrait of Oscar-winner Taika Waititi, which has won the Archibald Packing Room Prize. Photo: AAP

For self-taught artist Claus Stangl, getting Academy Award-winning director Taika Waititi to pose for his prize-winning portrait was a lucky coincidence.

Stangl on Thursday took out the $3000 Packing Room Prize, an Archibald Prize category that’s awarded by gallery staff who receive, unpack and hang the portraits.

The Sydney-based artist who sees portrait painting as a way to, if you’re lucky meet people you really admire, said he took a shot in the dark at coaxing the filmmaker into a studio.

Waititi agreed to sit for him in June last year while he was in Sydney making the upcoming film Thor: Love and Thunder.

“He’s one of my favourite writers. His scripts are just beautiful,” Stangl said.

“It was really fortunate. I knew if I reached out to him whilst the last Archibald was going, I might get a little window of time when he’s in the country.”

Waititi took to social media on Thursday to hail the success of the “sick portrait”.

“I’m still relevant, b—–s!” he wrote, adding (via Instagram) “what’s better than a 2D painting of this gifted, cocky, Kiwi son of a gunslinger … is that’s a 3D painting!”.

Stangl’s creative partner Stuart Miller happened to know Neil Sharma, who worked with Waititi on Thor, so the artist managed to send through some ideas on how they should approach the portrait.

He settled on a 3D-style painting to express Waititi’s playfulness, wit and charm, and wanted it to feel nostalgic as a “homage to the graphics in the film of our era”.

“My memories are cereal boxes with 3D, posters with 3D, films coming out in 3D.

“Also, [it was] a big challenge. I like to challenge myself with each picture I make.”

Head packer Brett Cuthbertson holds 52 per cent of the vote for the Packing Room Prize, and this year was his last on the judging panel. He will retire after 41 years with the Art Gallery of NSW.

“In this world full of war and COVID, [it] is pretty miserable at times. This guy has a vision and a twisted sense of humour that we all need right now,” Mr Cuthbertson said, referring to Waititi.

“The painting immediately grabbed my attention. I love the look on his face and his pose. It’s the first time I’ve seen a 3D painting come in, but it’s kind of a fake 3D.”

Stangl’s portrait of Waititi is one of 52 finalist works for the Archibald Prize, selected from more than 800 entries.

The artist said he was already “scheming” next year’s entry.

“But to be honest with you, [and] it really sounds like a cliche, but just being in the show is all you ever really ask for when you enter the Archibald,” he said. “This right now is just a cherry on the cake.”

The winner of this year’s Archibald Prize will receive $100,000.

Entries must have been painted in the past year from at least one live sitting with the artist.

The $50,000 Wynne Prize will go to the best landscape painting of Australian scenery or figurative sculpture, while the $40,000 Sulman Prize will be awarded to the best subject painting, genre painting, or mural project in oil, acrylic, watercolour or mixed media.

In 2022, more than 1900 entries were received for the Archibald, Wynne and Sulman prizes combined.

The remaining winners will be announced on May 13.