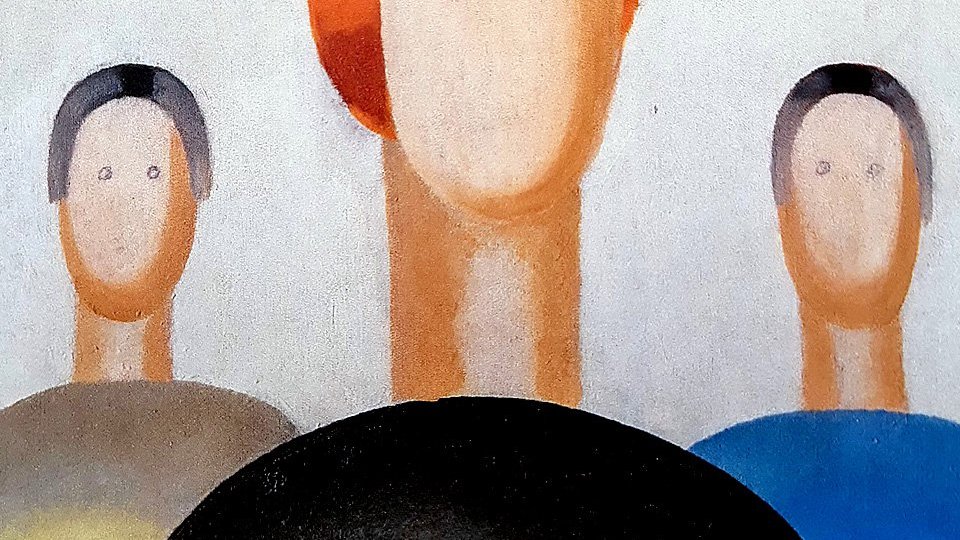 The painting was drawn on by a security guard during a Russian exhibition. Photo: Twitter

A security guard on his first day on the job has vandalised a famous and valuable piece of art, drawing eyes on an abstract painting worth $1.4 million.

Anna Leporskaya’s Three Figures (1932-34) painting was spoiled by an unnamed 60-year-old guard with a ballpoint pen while on display in a Russian gallery, reports revealed on Thursday.

Visitors to the The World as Non-Objectivity. The Birth of a New Art exhibition discovered the “improvement” at the Yeltsin Centre in Yekaterinburg, western Russia on December 7, according to The Art Newspaper in Russia.

The Soviet avant-garde painting was marked with two pairs of eyes on two of the three figures.

The damaged painting was immediately removed and returned to its home at the State Tretyakov Gallery in Moscow to be inspected by an art restorer.

According to The Art Newspaper, the ink from the ballpoint pen penetrated the paint layer – and the titanium white paint used by Leporskaya lacked a protective varnish.

The Russian media outlet said that was common for abstract paintings of the era.

AlfaStrakhovanie agreed to pay the estimated restoration fee of $4670. The Three Figures‘ restoration is currently underway.

The Yeltsin Centre’s executive director Alexander Drozdov confirmed the culprit, according to local media on Monday.

“They found out about what happened, and who became the culprit of this hooliganism, insanity, from the cameras. It turned out that this is an employee of a private security company, with whom we have concluded an agreement to ensure the protection of the Yeltsin Centre and the museum,” Ms Drozdov said.

The Moscow Times reports the unnamed guard committed the crime on his first day at work for the Yeltsin Centre. He has reportedly already been fired.

His motivation for the unauthorised addition to the artwork has not been revealed – although there are multiple English-language reports that he was “bored”.

Art Newspaper stated police had refused to investigate the vandalism, deeming the damage too “insignificant”.

Russia’s Ministry of Culture complained about the refusal to open a criminal case in January, claiming the damage represented the destruction of the cultural heritage of the people of the Russian Federation.

Police opened a criminal case into the vandalism on February 4, local media report.

Johnny vs. Amber: Two-part documentary set to air as defamation trial concludes
On the elegance and wry observations of Jeffrey Smart, one of Australia’s favourite painters
Today's Stories