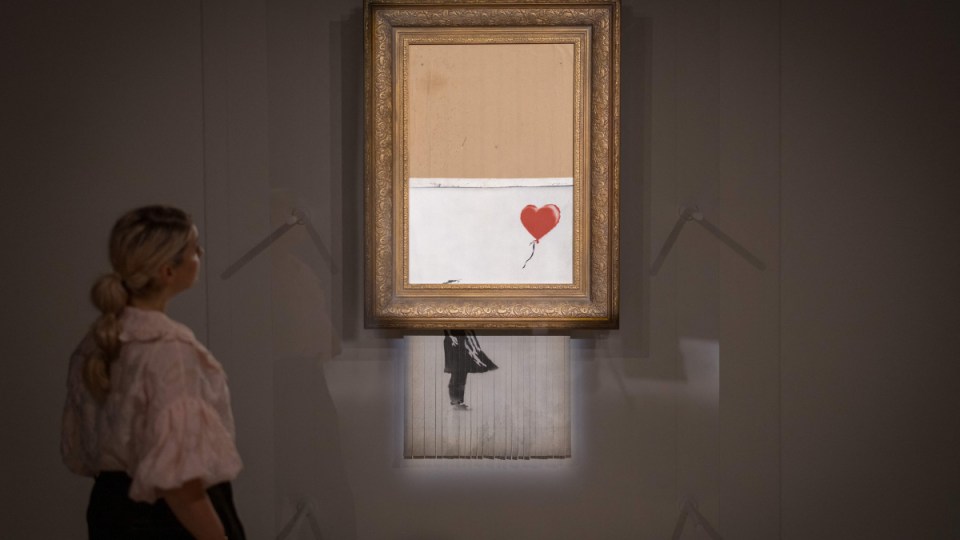 The half-shredded artwork on display before its auction this week. Photo: Getty

A work by British street artist Banksy that sensationally self-shredded just after it sold for $US1.4 million ($A1.9 million) has sold again for $US25 million at an auction.

It consists of a half-shredded canvas in an ornate frame bearing a spray-painted image of a girl reaching for a heart-shaped red balloon.

When it last sold at Sotheby’s in October 2018, the piece was known as Girl With Balloon.

At that sale – just as an anonymous European buyer made the winning bid – a hidden shredder embedded in the frame by Banksy whirred to life, leaving half the canvas hanging from the frame in strips.

At the time, Banksy posted a video to his website implying the partial shredding the work was supposed to have been complete.

It appeared to show the famously anonymous artist constructing the shredding mechanism inside an ornate frame and pushing a button in a black box to activate the destruction.

“In rehearsals it worked every time,” the end of the video noted.

The act shocked the crowd, but the winning bidder, a European collector, went ahead and bought it anyway.

Sotheby’s said this week the work created in the stunt was “the ultimate Banksy artwork”.

Banksy, who began his career spray-painting buildings in Bristol, England, and has become one of the world’s best-known artists, has never disclosed his full identity.

His Girl With Balloon was originally stencilled on a wall in east London and has been endlessly reproduced, becoming one of the artist’s best-known images.