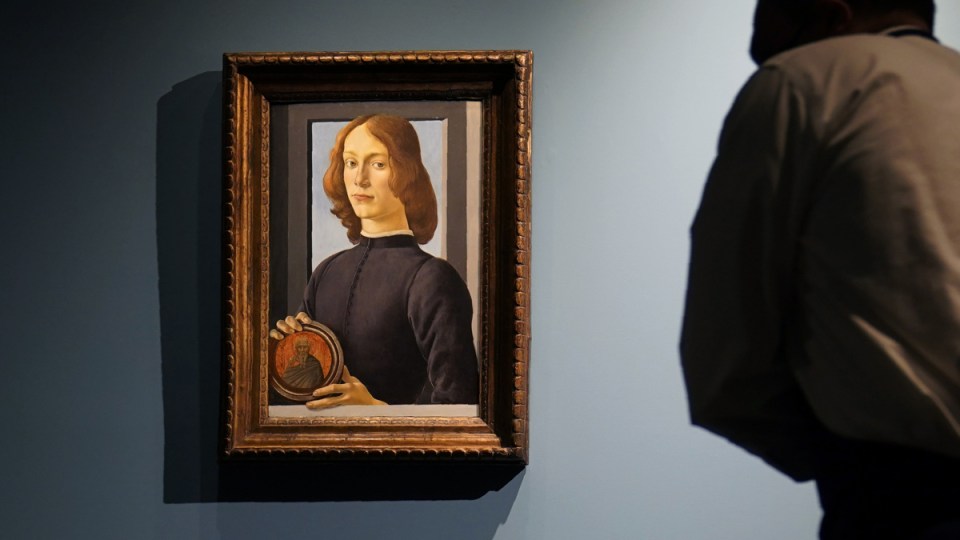 The work was last sold in 1982, and has been in private hands since. Photo: AAP

A small painting by Sandro Botticelli has sold at Sotheby’s in New York for $US92.2 million ($A120.6 million), an auction record for the Renaissance master.

The work, Young Man Holding A Roundel, from about 1475, depicts a young nobleman holding a round painting of a saint.

It is one of just three portraits in private hands by the artist best known for The Birth of Venus.

“This is not only an exceptional painting, it is also the epitome of beauty, and of a moment when so much of our Western civilisation began,” said Christopher Apostle, head of Sotheby’s Old Masters Painting department in New York.

“Today’s result is a fitting tribute, both to the painting itself and all that it represents.”

Two bidders competed for the painting at Thursday’s live-streamed auction. Sotheby’s did not disclose the identity of the buyer.

Sotheby’s exhibited Portrait Of A Young Man Holding A Roundel in London, Dubai, Los Angeles and New York ahead of Thursday’s sale.

The price, which included the auction house’s fees, was the highest price paid for an old master work since Leonardo da Vinci’s Salvator Mundi sold for $US450 million ($A588 million) in 2017.