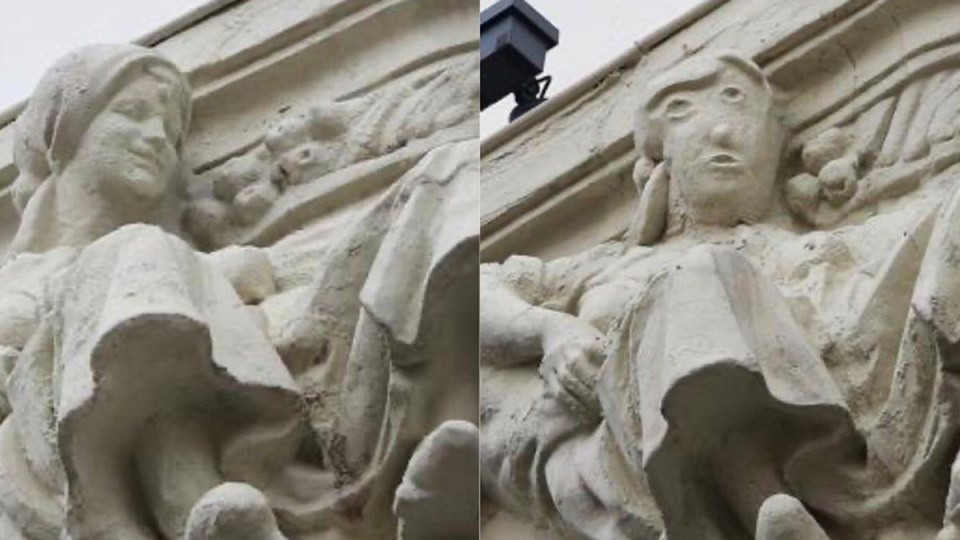 How it started and how it's going: The before and after of the Palencia fresco. Photo: Twitter

Ham-fisted amateur art restorers have been at it again in Spain, turning a carved figure of a woman into a sight dubbed “the potato head of Palencia”.

The botched work has come to widespread attention via Facebook posts and photos from an aghast local artist, Antonio Guzmán Capel.

The work, which is nearly a century old, previously showed a smiling woman placed in a country scene. It adorned a bank facade in the northern Spanish city.

Now, after a somewhat unlikely “restoration” showing a melted face with two round cavities standing in for eyes, a misshapen lump that might be a nose, and a open wide mouth.

Capel has blamed the so-called restorer while also pointing out that the real criminal is surely whoever commissioned the job and did nothing to complain as work progressed.

That prompted the Madrid-based Professional Association of Restorers and Conservators to note – most strenuously – that “this is NOT a professional restoration”.

Spain has a somewhat unhealthy reputation for such infamous restoration jobs.

Among the most famous is a 2012 repainting of a 19th-century fresco of Jesus that earned the unfortunate global nickname of “Monkey Christ” after some attention at the hand of an 81-year-old parishoner.

Other more recent incidents in Spain include a garish repainting of a 15th century wooden sculpture of the Virgin Mary, St Anne and the infant Jesus; the redoing of a 500-year-old St George figure that turned him into a toy soldier; and a host of failed attempts to give the Virgin Mary a makeover in a copy of a painting by the Baroque artist Bartolomé Esteban Murillo.

At the time of the St George controversy, professional restorers blasted the situation as “frightening”.

“It shows a frightening lack of training of the kind required for this sort of job.”