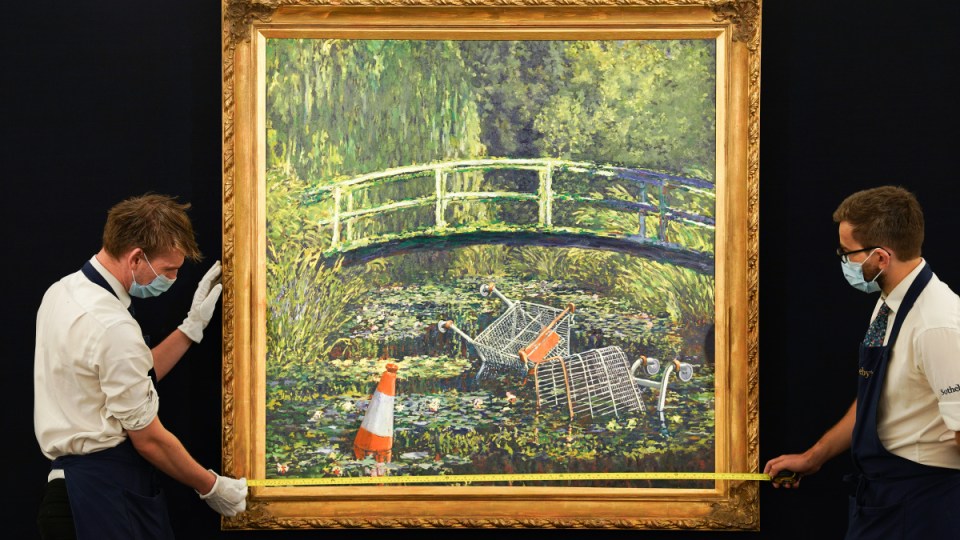 Banksy's Show Me the Monet sells for $13 million at Sotheby's auction. Photo: Getty

Banksy’s Show Me the Monet was purchased by an unidentified bidder and fetched the second-highest price ever paid for a work by the anonymous Bristol street artist.

The 2005 painting earns its tongue-in-cheek title by depicting one of Claude Monet’s career defining works – with a modern twist.

Monet’s famous image of water lilies under a footbridge in his garden at Giverny has been garnished with an orange traffic cone and abandoned shopping trolleys.

Sotheby’s European head of contemporary art Alex Branczik said the work was one of the “strongest and most iconic” Banksy works to appear at auction.

The highest price ever paid for a Banksy work was near £10 million ($18 million), for Devolved Parliament, which sold last year at the same auction house.

The satirical oil painting depicts Britain’s House of Commons overrun with chimpanzees and was initially titled Question Time. It was created in 2009 for the Banksy vs. Bristol Museum exhibition.

At the time, Banksy reacted on Instagram, saying it was a “record price for a Banksy painting” and “shame I didn’t still own it”.

Banksy, whose true identity remains unconfirmed, began his career spray-painting buildings and his street art is still highly sought after.

In July, Banksy disguised himself as a cleaner to graffiti pictures of masked rats and hand sanitiser – titled If You Don’t Mask, You Don’t Get – on the London Underground.

Unfortunately, overzealous cleaners scrubbed the coronavirus-inspired artwork from the public transport network, even before the street artist could claim it as his own.

The seller had considerably more luck than an unidentified man who attempted to cash in on a stencil purportedly painted by the artist in 2004.

The unidentified man claimed to have removed the piece — which looks like one of the artist’s trademark rats ― from a wall on the seafront in Brighton, south-east England.

“It looked loose. Went over, pulled it off basically, a little bit of a tug,” the man told one of the show’s art experts, Rupert Maas, in a clip that aired on the BBC’s Antique Roadshow over the weekend.

Maas was quick to dash the man’s hopes of striking a fortune with the artwork.

“The thing about Banksy, and he’s not the first to have done this, of course, is that he manages his brand very, very carefully indeed,” Maas explained.

“There’s a website where you can go in and you can apply for a certificate of authenticity of his work.

“And then he, or his team, will issue one if they think that, first of all, it’s authentic, and B, they think that it has not been removed from the public domain for which it was painted, and into the private. Now, that might be a reason not to issue a certificate of authenticity.”

The service that authenticates Banksy’s works is called Pest Control.

The man told Maas he had applied for authentication but was unsuccessful.

“They said they couldn’t claim it was an original Banksy,” he said.

“I know it’s real. Because Brighton was hit quite a bit by Banksy when he was down there around that time.”

Maas was quite pointed in the reasoning behind his dismissal.

“I think the message here is that, if you do see a piece of graffiti art out there, leave it, leave it for the public. I’m not lecturing you. I’m just saying, without that certificate, it’s just very difficult to sell. With it, it might be worth £20,000 [around $26,000]. Without it, you’re nowhere.”

While it is unclear whether the piece was actually by Banksy, it does bear all of his hallmarks.

A message did appear on the Pest Control website that said the Antiques Roadshow segment sums up “rather well” its policy of verification.

Banksy’s Show Me the Monet sells at auction for $13.9 million