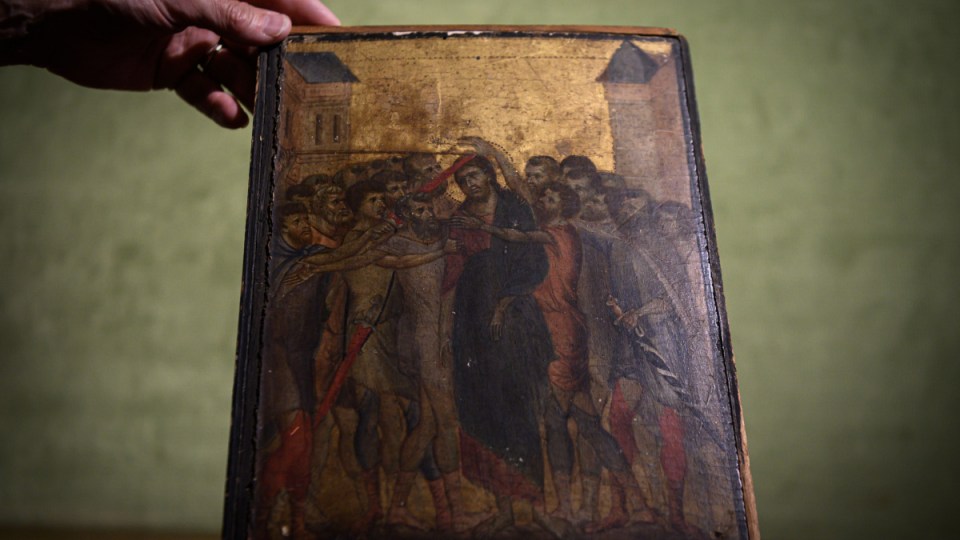 The hugely valuable artwork had hung in the kitchen of a Paris apartment for years. Photo: Getty

A long-lost painting by 13th century Italian master Cimabue that was found hanging in the kitchen of an elderly French woman has sold for 24 million euros ($A39 million), more than four times the pre-auction estimate, auction house Acteon says.

The Mocking of Christ painting by early Renaissance artist Cimabue valued at 4 million-6 million euros when it was found earlier this year.

It had spent years displayed above a cooking hot-plate on the wall of an apartment near Paris. Its potential value was only identified when auctioneer Philomene Wolf was brought in to value the apartment’s contents before its owner (a woman in her 90s) moved out.

The woman had reportedly thought the near-priceless work was an old religious icon with little value. But tests revealed it to be a work dating from 1280, by Cimabue, who was also known as Cenni di Pepo.

“When a unique work of a painter as rare as Cimabue comes to market, you have to be ready for surprises,” said Dominique Le Coent, head of auction house Acteon in Senlis, north of Paris.

“This is the only Cimabue that has ever come on the market.”

Acteon did not reveal the identity of the winning bidder but said a foreign museum had been among the would-be buyers.

The tiny artwork, measuring just 20 centimetres by 26 centimetres, is believed to be part of a diptych consisting of eight small panels.

Two other pieces from that series – The Virgin and Child with Two Angels and The Flagellation of Christ – hang in the National Gallery in London and the Frick Collection in New York respectively.

Born in Florence, Cimabue was a pioneering Italian primitive painter. Only about 10 of his known works are believed to have survived.

Cimabue was one of the first to use perspective and paint in a more natural style that broke with mediaeval and Byzantine traditions. By some accounts, he was also the man who taught Giotto – the forefather of the Italian Renaissance movement – to paint.