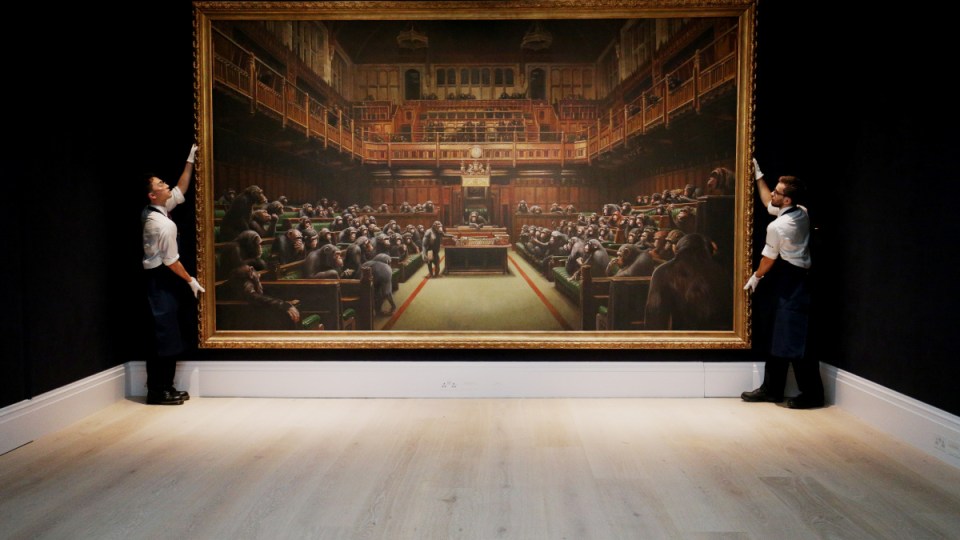 An oil painting by Banksy showing Britain’s House of Commons overrun with chimpanzees has fetched a record near £10 million ($18 million) at auction.

The anonymous Bristol artist painted the four-metre Devolved Parliament – his largest work and one of its best-known non-street artworks – in 2009.

Auction house Sotheby’s quoted it at between £1.5 million and £2 million ($3.6 million) for its sale in London on Thursday night, but the hammer fell at nearly five times that price.

Sotheby’s tweeted that Devolved Parliament sold “to applause at £9,879,500 ($18 million) – nine times its previous record – after a 13-minute bidding battle”.

Banksy reacted on Instagram, saying it was a “record price for a Banksy painting” and “shame I didn’t still own it”.

. Record price for a Banksy painting set at auction tonight. Shame I didn’t still own it.

Sotheby’s said the canvas, which had made headlines around the world even before its appearance in the London galleries, sparked a 13-minute bidding battle on the phones and in the room.

“Regardless of where you sit in the Brexit debate, there’s no doubt that this work is more pertinent now than it has ever been,” the auction house said.

The work, a satirical oil painting depicting the House of Commons filled with chimpanzees, was initially titled Question Time. It was created in 2009 for the Banksy vs. Bristol Museum exhibition.

The painting’s anonymous owner lent it to the museum earlier this year to mark the exhibition’s 10th anniversary and Britain’s original planned exit from the European Union on March 29.

A day before the work was unveiled at the museum again, Banksy renamed it. He also reworked some details, extinguishing the House of Commons lamps and turning a banana held by a chimp upside down.

“I made this 10 years ago. Bristol museum have just put it back on display to mark Brexit day,” Banksy posted on Instagram in March.

Devolved Parliament was offered at auction “exactly a year on from the unprecedented media storm surrounding the first ever creation of an artwork during a live sale”, Sotheby’s said.

It was referring to the auto-destruction of Banksy’s Girl with Balloon, now known as Love is in the Bin, as the gavel came down to seal the final bid of £1.04 million at auction in Ocotber 2018.

The work, depicting a young girl with her hand extended toward a red heart-shaped balloon carried away by the wind, was partially shredded during the auction through a mechanical device hidden in the frame by the artist.

Sotheby’s said Banksy, whose identity remains a mystery, had staged an “artist-driven hoax at the auction house’s expense that epitomises [his] anarchic and rebellious spirit”.