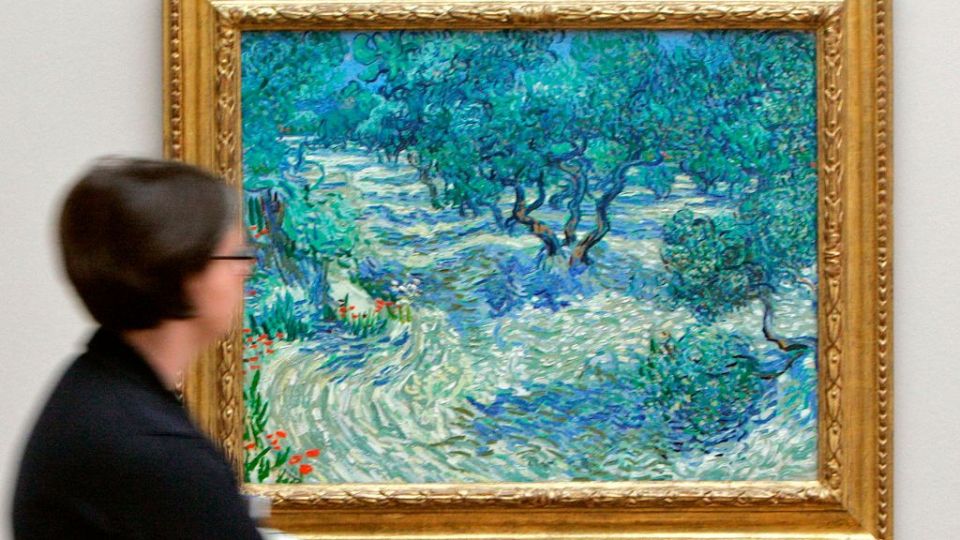 Vincent van Gogh painted his Olive Trees series in 1889 while staying in an asylum in the south of France. Photo: Getty Photo: AFP/Getty

A small grasshopper has been found embedded in a Vincent van Gogh painting.

The insect was stuck in the thick paint in the lower foreground of the famed artist’s Olive Trees, Kansas City’s Nelson-Atkins Museum of Art said.

“I must have picked up a good hundred flies and more off the four canvases that you’ll be getting, not to mention the dust and sand,” he mused in an 1885 letter to his brother Theo.

Nelson-Atkins conservator Mary Schafer made the grasshopper discovery while examining the work under magnification.

The bug is not visible through casual observation.

“I think it’s not uncommon to find plant material, bugs, sand stuck in the paint of works but in this case we’re able to talk about the grasshopper with our visitors in a fun way, learn about Van Gogh’s process and how he painted,” she said.

A paleo-entomologist said the thorax and abdomen of the insect was missing and that there was no sign of movement evident in the paint, suggesting the grasshopper was dead before it landed on the canvas.

The close study of the painting is part of an effort to create an online catalogue of the 104 French paintings and pastels at the museum.

Van Gogh painted a series of canvases depicting olive trees during his stay at an asylum in Saint-Remy-de-Provence in southern France where he committed himself after a series of breakdowns.

“The murmur of an olive grove has something very intimate, immensely old about it,” he wrote to his brother.

The canvas one held by Nelson-Atkins was painted in 1889.