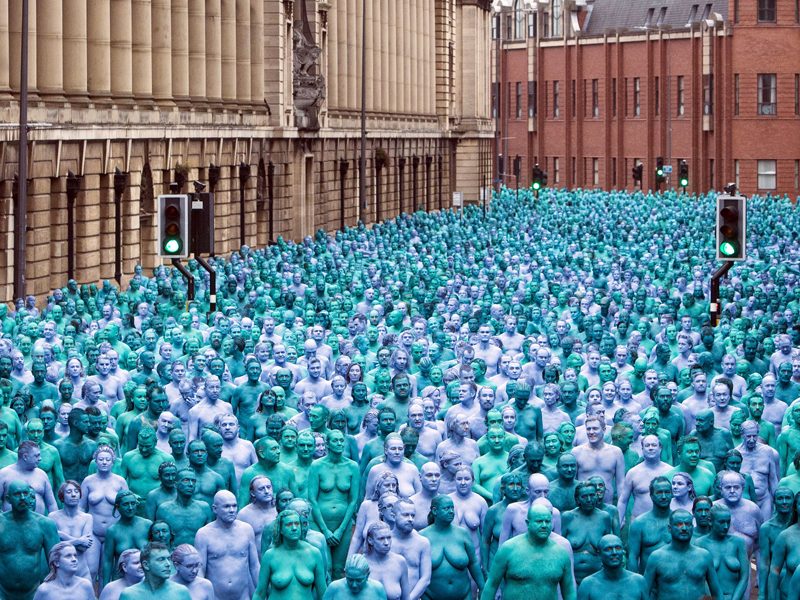 Thousands of people have stripped and been painted blue as they starred in a huge installation to celebrate Hull’s relationship with the sea.

Hull City Council said 3200 people took part in the event – the largest of its kind ever to be staged in the UK by New York-based artist Spencer Tunick.

Tunick’s Sea of Hull installation involved participants from 20 countries, including American Stephane Janssen, 80, who has posed for him on 20 previous occasions.

The hundreds who gathered at dawn were daubed with four shades of blue body paint in celebration of Hull’s maritime heritage and then posed for a series of site specific installations around some of the city’s best known historic locations.

I’m in Hull joining in with Spencer Tunick’s blue nude-in. Can you see me? Clue – I’m standing next to @camillalong pic.twitter.com/CnnDTRgNPa

These included the former Queens Dock, now a city centre park, the Guildhall and the award-winning Scale Lane swing bridge over the River Hull.

It will be one of the highlights of the gallery’s program in 2017, when Hull is UK City of Culture.

The council said Saturday’s turnout is the largest number of participants taking part in any of Tunick’s previous UK artworks, beating Gateshead in 2005 and Salford in 2010.

Brits get blue and naked for art’s sake