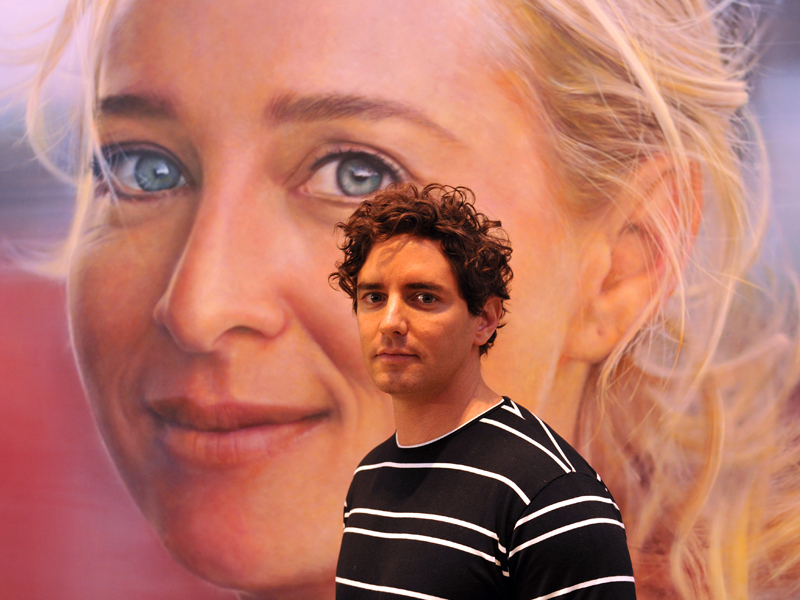 For a man who professes not to have much of a plan in life, 2014 has been a remarkable year for the 37-year-old.

The self-taught artist won his fourth Archibald in September for a portrait of his four-year-old son Luca, and in April married Australia’s sweetheart, actress Asher Keddie.

The Audi ambassador was also named GQ’s Artist of the Year in Sydney last month, where Offspring star Keddie revealed she was expecting the couple’s first child.

“Asher will confirm this, I don’t have much of a plan in life,” Fantauzzo explains.

“It’s a bit hippie sounding, but everything’s just fallen into place. The biggest thing is that we’ve got the baby [on the way].”

“Somehow I keep landing on my feet.”

In a rare private tour of Fantauzzo’s Melbourne studio, the love between he and 40-year-old Keddie is obvious.

While Fantauzzo discusses the oversized portrait of his wife entitled Love Face, she looks over at him, her face glowing with adoration, with that very same look of love.

The pair met in 2012 through mutual friend and celebrity chef Matt Moran.

By the time Fantauzzo finished painting Keddie’s portrait, which won him the 2013 Archibald Prize People’s Choice Award, the pair were madly in love.

Speaking with Fairfax, Fantauzzo said they had “an instant connection that I’d never felt before”.

“She constantly inspires me. Everything she says goes right thought me. If she smiles, laughs or cries it makes my hair stand up.”

The self-taught painter, who left school at the age of 13 to become a chef, says painting a person involves trust and intimacy.

“When I paint someone’s portrait, there’s a lot of trust involved and I’m genuinely very interested in who they are and what they have to say,” he told The New Daily.

“More than just the still image, to me, there’s a whole story.

“Sometimes some of the most interesting things I’ve learnt [about someone] aren’t in the painting because it’s privileged and it’s private and I keep it to myself.”

Fantauzzo, who has painted the likes of Baz Luhrmann Heath Ledger and Guy Pearce, says it’s important to get the fine balance between a person’s strength and vulnerability.

“It’s a balance of someone being strong or confident, and having to do that to get to where they are in their life and career, and then this softness or vulnerability,” he explains.

When asked what 2015 holds, Fantauzzo says he wants to make documentaries, but can hardly contain his boyish excitement when talking about the arrival of he and Keddie’s baby.

“That’s the biggest, most exciting thing,” he says. Thanks to Madmen Entertainment, The New Daily are giving away five ‘Offspring’ complete season box sets.

Send your name and address to competition@thenewdaily.com.au to enter.