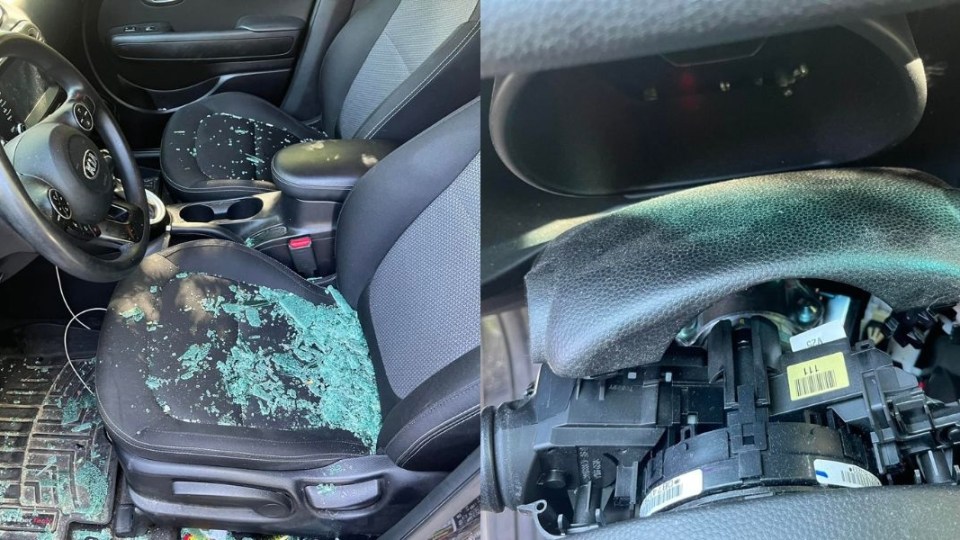 The alarming Kia challenge has shown how a USB cable can be used to start up a Kia car. Photos: Facebook/AlissaSmart

An alarming new TikTok challenge is putting owners of a particular vehicle on high alert after a viral video caused an uptick in car thefts and break-ins in the US.

The Kia challenge, which emerged earlier this month, shows how a USB cable can be used to start up a Kia car and has been a source of grief for many owners of the vehicle.

The challenge started when TikTok user @robbierayyy released a video starting up a Kia using only a USB cable.

In the since-removed video, the TikTok user can be heard saying, “You don’t need a key … it should override it”, while using the USB cable to hot wire the car.

The video appears to have led to an increase in car theft by US thieves.

Also at risk are owners of Hyundai cars, another South Korean brand with similar models to Kia.

Earlier this month, a US resident fell victim to this challenge when her Kia Soul was broken into.

Alissa Smart told a local US television station she was woken by her niece late at night and shocked to find the driver’s side window of her car completely destroyed.

Ms Smart believes her car was broken into by people participating in  this trend.

“This trend absolutely makes me feel disgusted,” she said.

“It’s really beyond me that people think it’s okay to post criminal acts, let alone participate in them after seeing them online.”

Along with the damage to her window, Ms Smart said the thieves took off with her wallet.

But they did not manage to steal her car.

“I can’t afford to fix my vehicle, which leaves me and my two children without our only mode of transportation,” Ms Smart said.

She is seemingly one of many victims of the Kia challenge.

Earlier this week, a US newspaper reported that nearly 200 cars were stolen over the past two weeks in Charlotte, North Carolina.

Police said that was about 30 per cent higher than was typical for this time of year, with 2008 Kia and Hyundai models accounting for the majority of stolen cars.

The Kia challenge is not the first dangerous trend to come out of TikTok.

The social media platform has previously come under fire for life-threatening trends like The Benadryl Challenge, which saw teenagers egging one another on to consume potentially fatal doses of the antihistamine.

Another challenge, called The Cha Cha Slide Challenge, saw teenagers behind the wheel driving to the lyrics of the 2000s hit, which instructs listeners to “slide to the left” and “slide to the right”.

Both challenges were met concern and criticism online.

Although the original Kia challenge video has been deleted, TikTok is urging anyone who comes across the video to report it.